London, 9 April 2018– Demand has continued its robust year-on-year growth across the world’s major airports both in terms of passenger numbers and air cargo. Passenger traffic at the world’s 20 busiest airports grew by 5.2% in 2017. With almost 1.5 billion passengers passing through their terminals in 2017, this group of 20 represents 17% of global passenger traffic.

Scroll down for the full passenger traffic briefing note.

Air cargo volumes at the 20 busiest airports grew by 6.8% in 2017. These airports handled a combined 51 million metric tonnes of cargo. This represents 43% of global air cargo volumes.

Air cargo experienced a revival across many of the world’s airports in 2017 and into 2018. Even with the uncertainty regarding the threat of trade wars and the growth of protectionist sentiments across the world, business confidence has remained strong through inventory build-ups and increased export orders in 2017.

A strengthened economy in the United States (US), together with an increase in global industrial production, and a strong US dollar have boosted inbound air cargo markets in recent years. Key air cargo centers, such as Chicago – O’Hare (ORD), experienced growth of 12.6% for 2017. The airport, which has significantly expanded its air cargo facilities, is centrally located geographically serving regional manufacturing within an intermodal transport network. The airport has also benefitted from international trade with China and other Asian countries. ORD’s international freight volumes increased by 12.2% in 2017.

Scroll down for the full air cargo briefing note:

“The surge in cargo volumes and passenger numbers across many of the world’s airports is testament to heightened business and consumer confidence, at least in the short term,” said Angela Gittens, Director General, ACI World. “The world’s airports continue to be a vital link in the economic multiplier effect that aviation provides and the role it plays as an enabler for global commerce is growing”.

“The universal access to online retail and e-commerce platforms represents a competitive pressure to the traditional brick and mortar retail shops in certain markets but the huge growth in e-commerce has fuelled the air cargo side of the airport business. This has resulted in increased global activity, especially in major markets such as China and the US.”

Gittens added, “The spectre of uncertainty regarding trade policy among major economies comes at a time when global commerce and our industry has recently thrived. The trans-pacific link, for instance, is an important ingredient in boosting international passenger traffic and international freight volumes”.

“Connecting people, business and places still remains paramount to the aviation sector despite the recent threats of a step backwards in market liberalization in some major economies,” Gittens concluded.

1.Airports Council International (ACI), the trade association of the world’s airports, was founded in 1991 with the objective of fostering cooperation among its member airports and other partners in world aviation, including the International Civil Aviation Organization, the International Air Transport Association and the Civil Air Navigation Services Organisation. In representing the best interests of airports during key phases of policy development, ACI makes a significant contribution toward ensuring the global air transport system is safe, secure, efficient and environmentally sustainable. As of January 2018, provisional figures show that ACI serves 641 members operating 1,953 airports in 176 countries.

2. Please note that all figures and percentages are extrapolations based on summed monthly data submissions by the world’s major commercial airports (1,202 airports). The final confirmed report will be published in summer 2018 and will include 2000+ airports; therefore, figures are subject to variation. 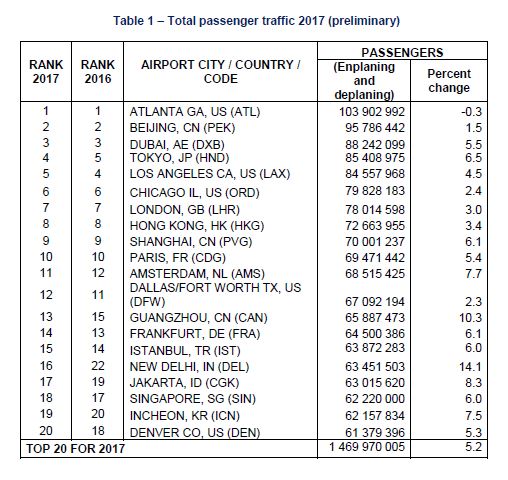 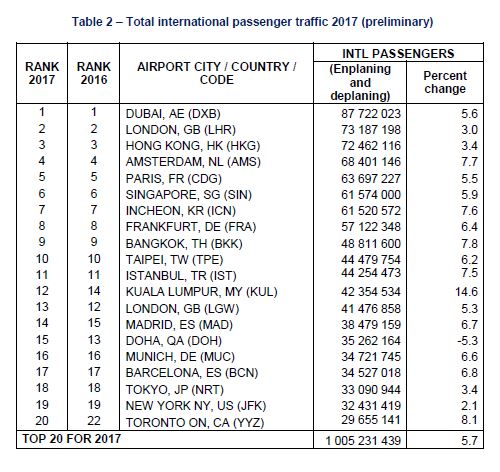 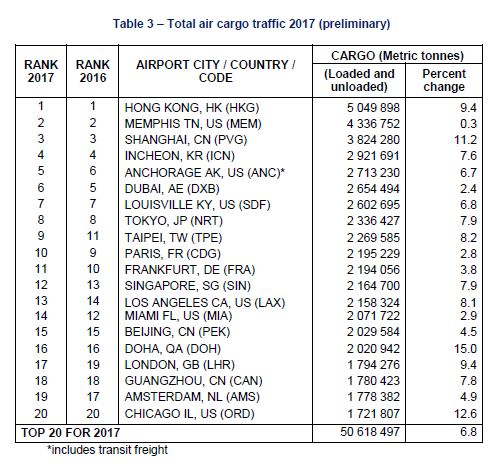 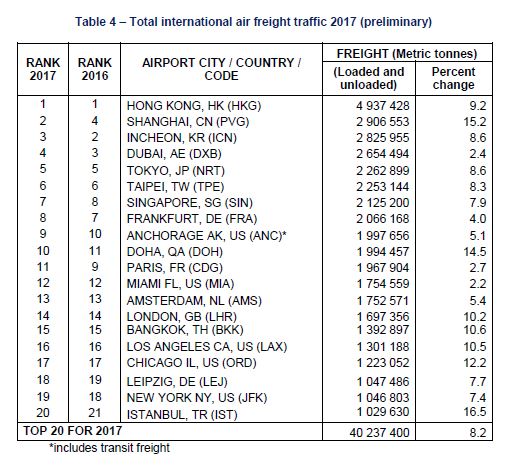 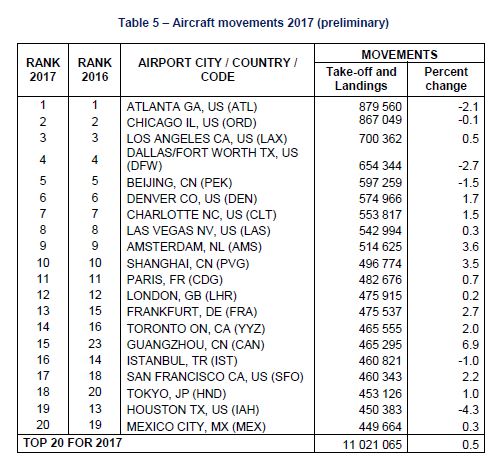 Growing rapidly in relatively short period of time, India is poised to be one of the largest aviation markets in the world in the years to come. With an astounding population base of over 1.3 billion inhabitants, the move towards a more liberalized aviation market coupled with stronger economic fundamentals has helped to awaken the Bengal tiger to become one of the fastest growing markets in the world.ACI’s World Airport Traffic Forecastspredicts that the country will represent the third largest aviation market, in terms of passenger throughput, after the US and China by 2020.

Delhi (DEL), the country’s busiest airport for passenger traffic, grew by 14.1% year-over year pushing it up from 22nd to the 16th busiest airport in the world. Even with this rapid growth in throughput, DEL was also ranked first in Airport Service Quality for airports above 40 million passengers per annum. The award, which is also shared with Mumbai (BOM), the second busiest Indian airport, is based on a derived score from a battery of passenger satisfaction metrics.

Chinese airports are the largest contributors to both passenger traffic and air cargo volumes growth. Boasting over 10 airports with over 20 million passengers per annum each, air transport demand continues to make large strides. After Beijing (PEK) and Shanghai (PVG), Guangzhou (CAN) is the third busiest airport in China. Just shy of 66 million passengers in 2017, the airport accommodates China’s burgeoning domestic market. The airport’s total passenger traffic grew by 10.3% in 2017. Other Chinese airport hubs that occupy a significant proportion of domestic traffic also experienced double digit growth. Hangzhou (HGH), Xi’An (XIY), Nanjing (NKG) and Tianjin (TSN) grew by 12.6%, 13.2%, 15.5% and 24.5% respectively.

The growth of Chinese aviation has also boosted international traffic on market segments with other regions such as North America. Asian airlines continued to make important inroads on key international and trans-Pacific segments across a number of airport pairs between US cities and China especially.

Subject to capacity considerations, according toACI’s World Airport Traffic Forecasts2017–2040, the Chinese appetite for air transport services has the potential to add an additional 3 billion passengers by 2040. This represents a 21% share of the contribution to projected global passenger traffic growth that is forecasted by 2040.

Given that many Asia-Pacific airports act as exporters of air cargo with North American airports acting as importers, growth in international freight traffic for each region was significantly affected by this occurrence. Both Asia-Pacific and North America experienced a jump of 11.4% and 10.3% respectively for international freight volumes in 2017. Shanghai, a major city centre for trade and business, continues to thrive. Shanghai Pudong International Airport (PVG), the world’s 3rd busiest air cargo airport experienced an increase of 11.2% in volumes. The airport has moved up to second rank in terms of international freight volumes in 2017 after an increase of 15.2% year-over-year in volumes.

The world’s largest air cargo hub continued to be Hong Kong (HKG), with a robust increase of 9.4%. This was followed by Memphis (MEM, +0.3%), which was the only cargo hub to show a modest increase among the top 20 busiest airports. The airport is home to FedEx, a major express package delivery firm. Increased competition among express delivery companies has become a reality especially due to the inroads made by Amazon, a major e-commerce firm. The company occupies strategic airports in North America such as Cincinnati/Northern Kentucky International Airport (CVG), located in the Midwest for its operations. Even though Amazon’s air cargo facilities will not be operational until 2020, the airport is among the fastest growing in the world in terms of air cargo volumes. CVG’s freight volumes grew by 27.3% in 2017. In Asia, Alibaba also continues to seize opportunities at regional hubs. The online retail giant centers its logistical operations at airports in China and recently Malaysia.

The reliability factor and the efficiency guarantee associated with express parcel deliveries that are generated from online purchases are an important driver in the upward surge in volumes shipped by air. Moreover, there is no doubt that a temporary substitution effect away from ocean cargo in 2016 and 2017, as a result of marine industry consolidations and bankruptcies, also helped to boost air cargo volumes over the short-term.

ATL is the world’s busiest airport for aircraft movements, ahead of ORD. Both airports experienced a decline of 2.1% and 0.7% respectively. The top 20 airports inched up by only 0.5% year-over-year in 2017 as compared to 2016. Though there has been weaker growth in aircraft movements especially in certain North American and European markets following the Great Recession, this is consistent with the move toward consolidated operations and a curbing of capacity by aircraft operators to increase aircraft load factors and improve yields. Adoption of larger aircraft especially for long-haul operations has also contributed to this phenomenon especially among Middle Eastern and Asian airlines.