Montreal, 25 March 2021 – Airports Council International (ACI) World has published its sixth assessment analyzing the economic impact of the COVID-19 pandemic, its effects on the global airport business, and the path to recovery.

A year ago, on 11 March 2020, the World Health Organization (WHO) declared the COVID-19 outbreak a pandemic. Since then, daily life across the globe has changed. Air transport has remained one of the hardest-hit global industries since the very beginning of the crisis. The ongoing COVID-19 pandemic has resulted in a full-scale global transportation crisis. It became quickly evident that it would evolve in a crisis like no others bringing the industry into survival mode, impaired by the loss of traffic and revenues.

It is clear that the impact of this crisis reaches way beyond aviation. Since the COVID-19 outbreak started, more than 2.7 million people have died worldwide due this virus. Researchers have recently estimated that the world has lost 20.5 million years of life because of premature COVID-19 deaths, and this number will just continue to increase.

Along with the human tragedy, the crisis has also resulted in dramatic damage to the global economy, trade, and mobility. Practically all aspects of economic and social activity were, and are still, disrupted.

The health, safety and wellbeing of passengers and staff is the aviation industry’s number one priority. Airports have introduced many new health and biosafety measures to help ensure the health and safety of passengers, and that airport customer experience reflects their changing expectations and addresses their concerns.

Airports and airlines are united in the call for governments to partner with the industry to prepare to restart global connectivity when the epidemiological situation allows, and the unprecedented global vaccination effort offers a beacon of hope that a return to normality is a possibility in the near future.

Since the first vaccine dose was administered in late 2020, more than 450 million doses have been administered across more than 130 countries. The possibility that summer vacations abroad may happen this year is more likely than ever.

Many industry surveys have shown that “vacation deprivation” combined with an upsurge in confidence in air travel provided by vaccination and safety measures should result in the number of people traveling outside of their countries will start this spring and significantly increase by mid-year.

One of the keys to supporting a sustained recovery will be the establishment of an interoperable health data trust framework to facilitate safe border reopening and cross-border travel. As such, ACI is supportive of any system which will allow testing and vaccination data to be shared consistently, effectively and in a way that protects the personal data of those that use it.

Despite positive signs and prospects for recovery, COVID-19 remains an existential crisis for airports, airlines and their commercial partners. In this context, the current document seeks to highlight some key figures in terms of the impact of the COVID-19 pandemic on airport traffic and revenues and pathways to recovery.

1. COVID-19 crisis had an unprecedented impact on airport traffic

Last year marked the end of a decade of consistent growth in global passenger traffic. The ongoing COVID-19 pandemic brought airports around the world to a virtual halt in the second quarter of 2020, resulting in airport traffic —and revenue —losses across all regions. While many countries have since then started to gradually reopen many parts of their economy, many states were confronted with subsequent waves of infections and several jurisdictions opted for the re-imposition of partial lockdowns.

Countries like France, Poland, Canada, India, and Chile had to increase or re-instate partial lockdowns in an effort to control the spread of a second, third or even fourth wave of infection. Even though most countries have moved away from all-encompassing lockdowns and are now trying to limit the infections with targeted and less disruptive restrictions, most jurisdictions have retained either partially or totally restrictive regulations pertaining to international travel including self-quarantine on arrival.

In this context, ACI World has produced the latest estimates regarding impact on passenger traffic. 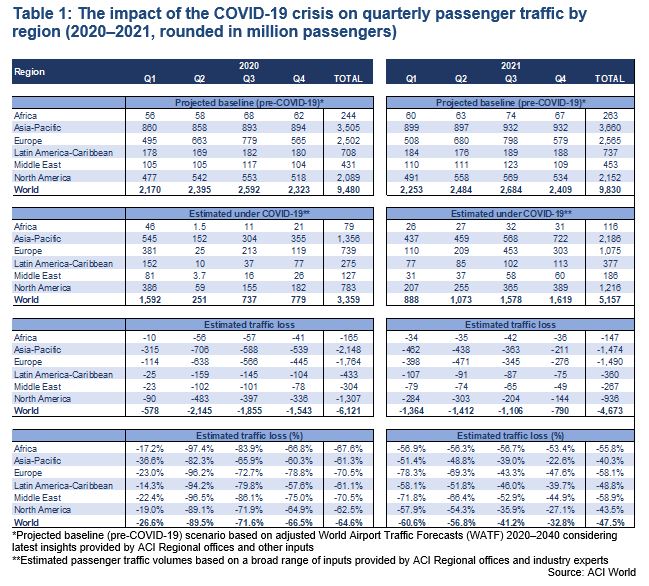 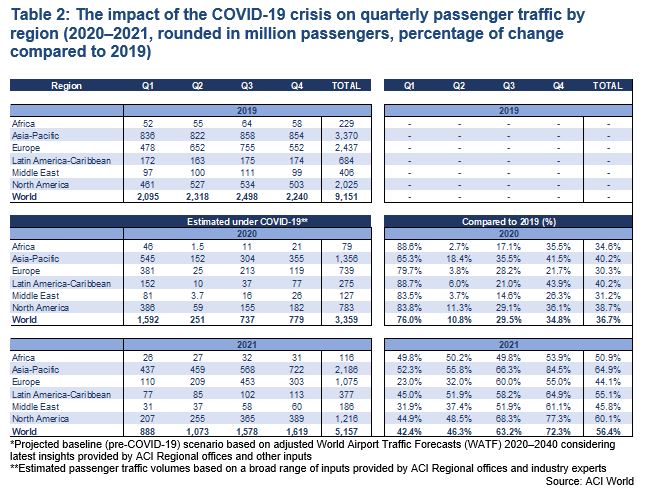 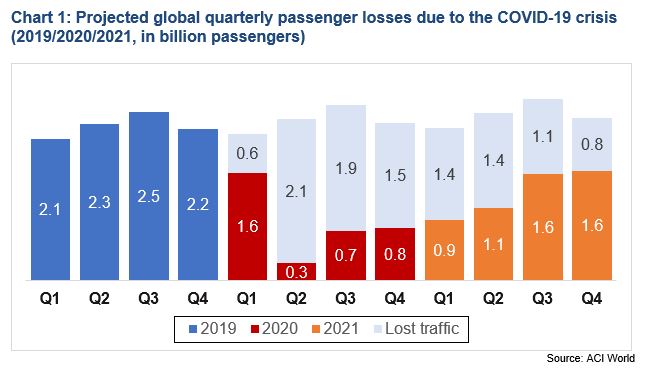 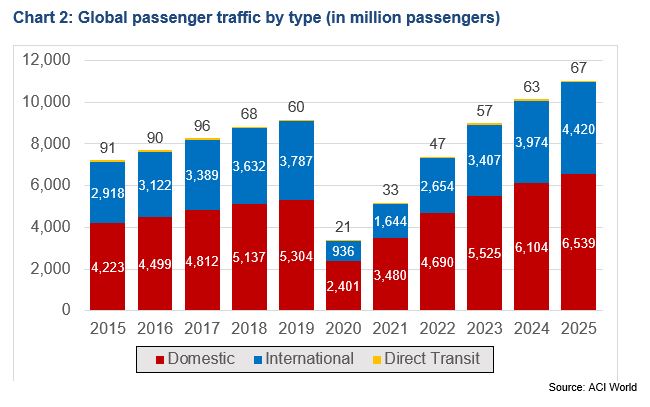 Air traffic is the very lifeblood of the airport business.

Airports generate more than 95% of all revenue from two operating sources: aeronautical and non-aeronautical services.

As traffic declines, airports’ ability to collect those charges decreases proportionally. With little flexibility in operating expenditures coupled with capital costs that are largely fixed, the current crisis represents an unprecedented challenge for the airport industry’s financial viability.

In September 2020, the Air Transport Action Group (ATAG), a global association that represents all sectors of the air transport industry, estimated that the COVID-19 crisis will result in the loss of 46 million aviation-supported jobs (-52.5%) as well as a reduction of $1.8 trillion USD in economic activity supported by aviation (-51.5%) (Aviation: Benefits Beyond Borders, ATAG 2020).

The current assessment assumes constant airport revenues on a per-passenger basis, even though preliminary evidence suggests that unit revenues may both increase or decrease depending on a combination of airport-specific factors.

Every airport has a unique portfolio of non-aeronautical activities, but as a rule of thumb, a higher proportion of passenger-related activities, such as retail or food and beverage concessions, lead to a steeper reduction in commercial revenues, while higher reliance on real estate income and rents acts as a cushion in times of crisis.

In this context, ACI World forecasts the following related to airport revenues: 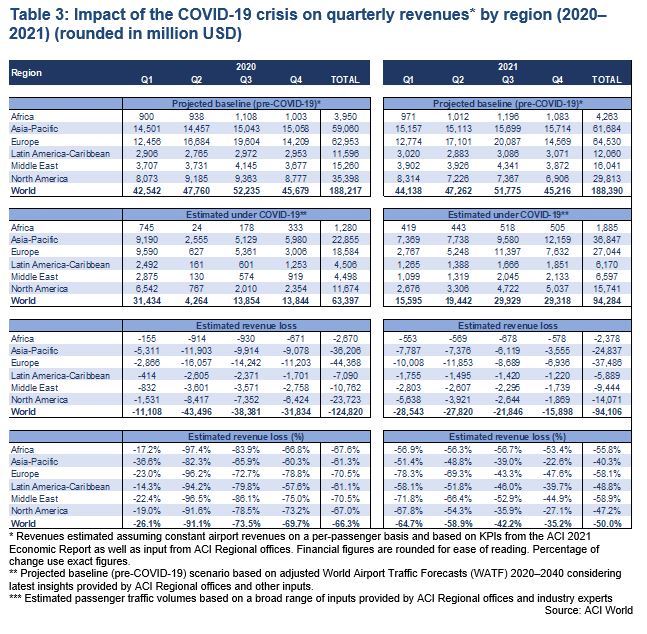 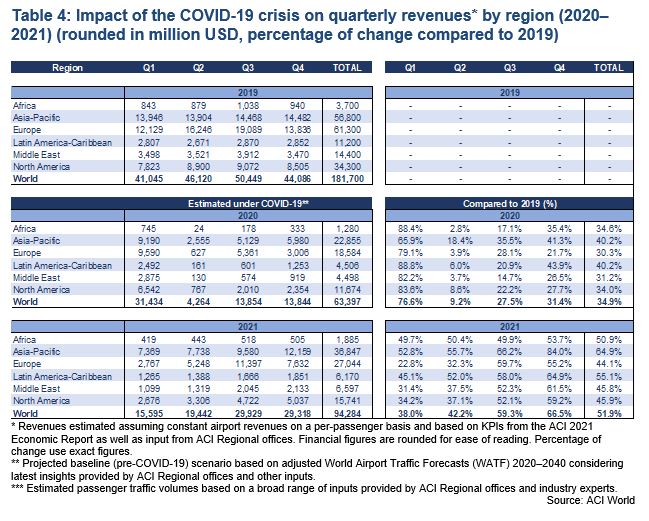 With the biggest vaccination campaign in history underway, we were seeing some positive signs and prospects for recovery. Both travellers and industry stakeholders are eager to resume traveling. Many industry experts forecast a surge in travel for the second half of 2021. Some are even referring to this potential increase as a “post-war like surge” in travel.

Much uncertainty still surrounds the recovery of the aviation industry, however, and projecting the path to recovery at this point is an exercise requiring prudence. Three scenarios are used to look at the potential recovery trajectory using the following assumptions.

The three scenarios use the following assumptions.

WATF 2020–2040: Developed in December 2020 and published in January of 2021, the WATF 2020–2040 was based on the assumptions of effective vaccines largely distributed in the second half of 2021 in addition to an enthusiasm from passengers to start flying again and a reasonable airlines fleet recovery. This scenario remains achievable but contingent to the ability of governments to contain the spread of new variants of the virus.

Pessimistic: Effective vaccines in 2021 but complex distribution in many emerging and developing countries and/or limited vaccine supply. Fear of traveling still present amongst passengers, coupled with prolonged economic downturn and slow airline fleet recovery. Third and fourth waves of infections are likely and could spread to multiple regions.

Under those assumptions, ACI World forecast the following related to the recovery of airport passenger traffic: 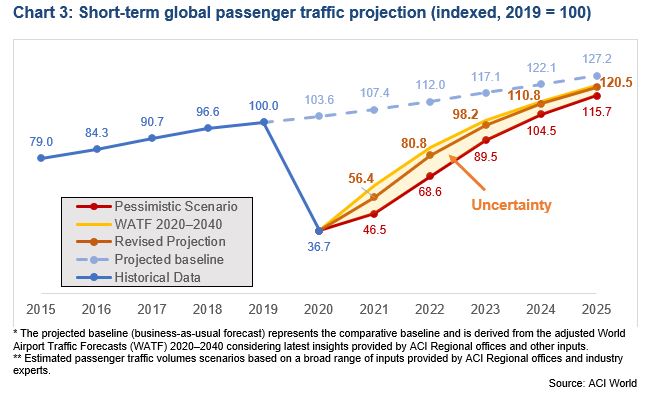