This was a slight improvement compared to the -91.3% year-over-year result in May and the second consecutive month with a marginal progress.

Global passenger traffic continued to decline, falling by another six percentage points compared to the prior month to -58.5% for the first six months of 2020. The 12-month rolling average for the global industry continued to move further into negative territories and was recorded at -27.3% by the end of June.

Air freight continued to be less impacted by the effect of the pandemic compared to the passenger market. Global air freight volumes saw improvement in June with year-over-year volumes showing a decline of -11.4% in June compared to a decline of -17.9% in May resulting in a -12.3% drop for the first six months of 2020. The global 12-month rolling average continued however it downward trend to reach a -7.3% drop by the end of the June.

“In the early days of the crisis, there were predictions that June would be the turning point with the recovery of the aviation industry beginning” ACI World Director General Luis Felipe de Oliveira said. “In fact, June results shows only a slow recovery in domestic markets in China and the United States while the international passenger segment continued to be practically non-existent, heavily affecting the financial results of the airports and postponing the recovery.

“While we noted some signs for optimism in June, the industry has remained on the ground for much longer than anticipated. In addition to the recovery taking longer than previously expected, uncertainty persists for the aviation industry.

“The recovery of air travel is crucial in the wider global economic recovery but, to succeed, it will need passengers to have confidence in the industry’s focus on their health and welfare and for governments to pursue harmonized, proportionate, evidence-based health measures.

“Unilateral national measures, especially a quarantine requirement for instance, is damaging to both the industry and passenger confidence and ACI has urged governments to follow a robust and consistent protocol for testing which should be implemented only when necessary and as an alternative to broad-brush requirements for quarantine.”

All regional markets posted improved global passenger traffic in June compared to May but – except for Asia-Pacific and North America – all other regions posted declines above -90%. The recovery of the domestic traffic in North America and Asia-Pacific helped them to record significantly better global traffic volumes in June with decline of -76.9% and -81.2% respectively compared to -82.5% and -90.3% in May.

International passenger traffic continued to be virtually halted for a third consecutive month with all regions recording decline above -95% year-over-year for June. The 12-month rolling average for the international segment was recorded at -29.6% and -64.5% for the first six months of 2020.

Besides Asia-Pacific and North America, domestic passenger markets continued to be severely impacted by the pandemic. Africa remains the most effected region with a year-over-year decline of -94.3% in June while Asia-Pacific, North America and now Europe show signs of improvement with decreases of -63.2%, -78.1% and -81.1% respectively. Latin America-Caribbean improved in June compare to May but remains severely impacted with decline of -88.3% of its domestic passenger market.

All regions apart from North America recorded significant losses in June with Latin America-Caribbean posting a drop of -28.6%, Africa at -27.0%, and Middle East at -26.3% while Asia-Pacific and Europe recorded lesser losses with decreases of -16.0% and -15.6% respectively. North America saw its total air freight volume to come back in positive territories with and increase of 3.9% in June compare to June 2019 mostly thanks to its strong domestic market (+11.7%) that compensated for the losses of -6.4% of its International freight market.

The international air freight markets losses were eased in June with a decline of -15.2% year-over-year compared to -19.6% in May. Domestic freight volumes also improved and are now at only -2.4% of June 2019 volumes mostly due to the strong performance of North America domestic market which recorded and increase of 11.7% in June compared to last year.

1. Stay up to date with ACI World’s COVID-19 communications through its dedicated news hub.

3. Airports Council International (ACI), the trade association of the world’s airports, was founded in 1991 with the objective of fostering cooperation among its member airports and other partners in world aviation, including the International Civil Aviation Organization, the International Air Transport Association and the Civil Air Navigation Services Organization. In representing the best interests of airports during key phases of policy development, ACI makes a significant contribution toward ensuring a global air transport system that is safe, secure, customer-centric and environmentally sustainable. As of January 2020, ACI serves 668 members, operating 1979 airports in 176 countries. 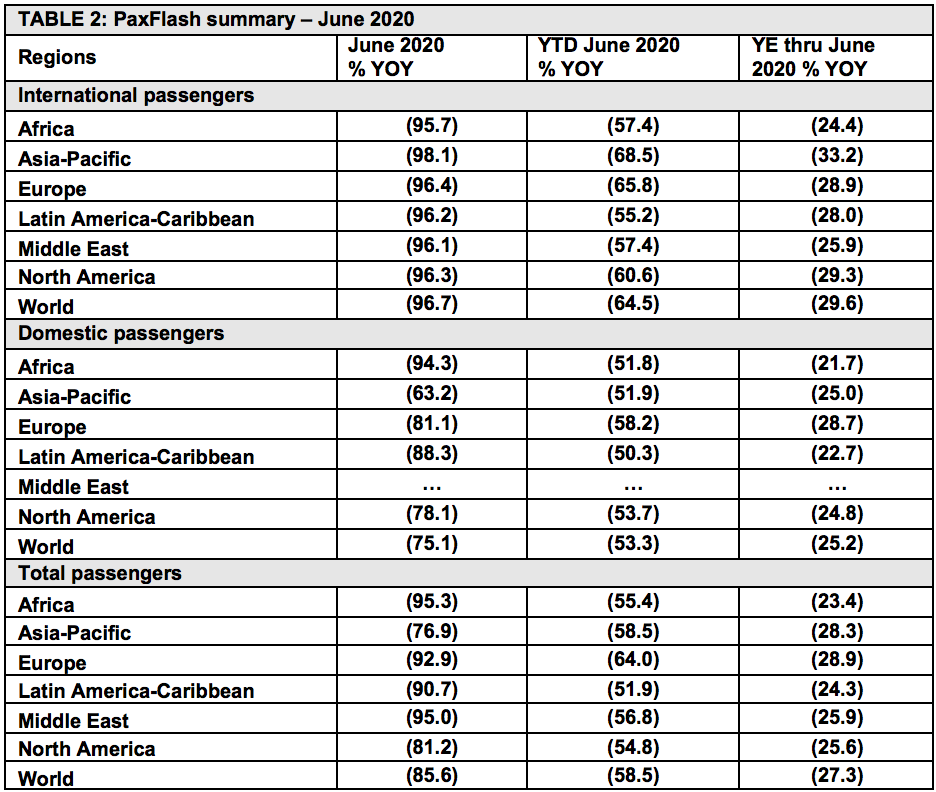 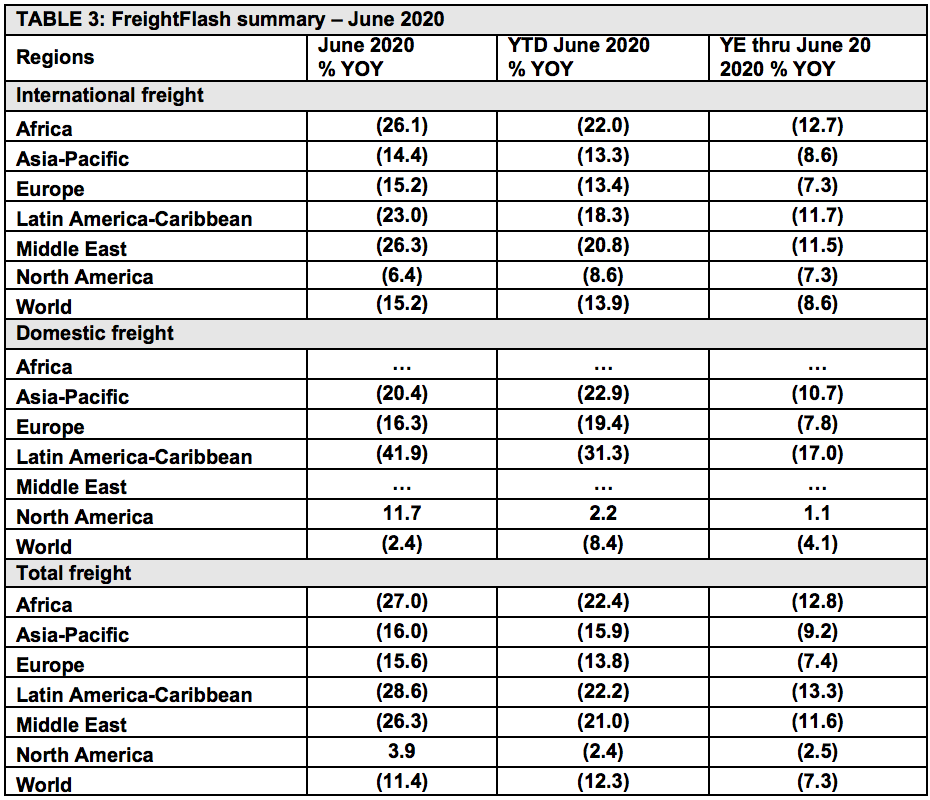