Montreal, 31 July 2020 – Airports Council International (ACI) World data has revealed that global passenger traffic declined by -91.3% year-over-year in May as a result of the ongoing COVID-19 pandemic.

This is slightly above the worst decline of global passenger numbers in the history of the aviation industry of -94.4% which was recorded the previous month in April.

Global passenger traffic continued its dramatic decline, falling more than 10 percentage points compared to the prior month to -52.5% for the first five months of 2020. The 12-month rolling average for the global industry is also continuing with the downward trend and recorded -19.3% by the end of May.

As in previous months, the effect of the COVID-19 pandemic on the air freight industry was not as significant in May when compared to the passenger market. Global air freight volumes posted slightly better results in May compared to April with a decline of -17.9% compared to May 2019 resulting in a -12.8% drop for the first five months of 2020. The global 12-month rolling average continued to move further into negative territory at -6.7% by the end of the month.

“After a devastating month of April for the aviation industry when global air travel came to a virtual halt, data for May revealed a tiny sign of a recovery driven by the domestic markets in China and the United States,” ACI World Director General Luis Felipe de Oliveira said.

“In the Asia-Pacific and North American regions, there were signs for optimism with the data showing some early improvement in domestic passenger traffic, but international traffic continued to be practically non-existent in May.

“As in previous months, global air freight volumes have not been affected to the same extent as passenger traffic and showed signs of a slight upward curve but, with most of the passenger fleet still grounded, capacity was dramatically reduced.

“Airports are important engines of growth and the recovery of this sector will be a significant driver of the global economic recovery. but this will only be sustained if passengers, staff, and the public have confidence in air travel.

Besides North America and Asia-Pacific, all other regional markets posted declines higher than -95% of their global passenger traffic. The start of a slow recovery of the domestic traffic helped North America and Asia-Pacific to post slightly better figures with decreases of -90.3% and -82.5% respectively. International passenger traffic continues to be virtually halted with all regions recording decline above -98% for a second consecutive month.

Global international and domestic markets posted unprecedented declines for a second month in a row, falling by -98.6% and -85.3%, respectively. The 12-month rolling average for the international segment was recorded at -20.2% and the domestic segment at -18.5%.

Domestic passenger markets remain severely affected by the ongoing crisis, but North America and Asia-Pacific have shown signs of a slow recovery. Decline are however still significant. North America posting a -88.8% decline while Asia Pacific recorded a -73.2% drop in domestic passengers. Other regions all recorded declines above -90% in May.

The COVID-19 outbreak continues to heavily impact all major freight markets except for North America, but small gains started to emerge in May when compared to the previous month. Globally, air freight volumes were reduced by almost a fifth in May, with a drop of -17.9% compared to May 2019.

Substantial losses were recorded in Africa (-38.3%), Latin America-Caribbean (-34.6%), and Middle East (-38.2%) while Asia-Pacific (-21.5%) and Europe (-18.7%) recorded lesser but still sizeable volume losses. North America, recorded a less significant drop of – 4.6% in total freight volumes alleviated by a robust domestic freight market that recorded an increase of +0.1% compared to a substantial loss of -11.0% for its International freight market.

The international air freight market’s negative trend has soothed in May with a loss of -19.6% compared to the previous month’s decrease of -26.4%. Domestic freight volumes followed a similar path and posted a slight improvement to – 13.6% in May compared to -13.8% in April. Year-to-date air freight figures for May, as well as the 12-month rolling average, continued their negative trend and are now at -12.3% and – 6.7%, respectively. 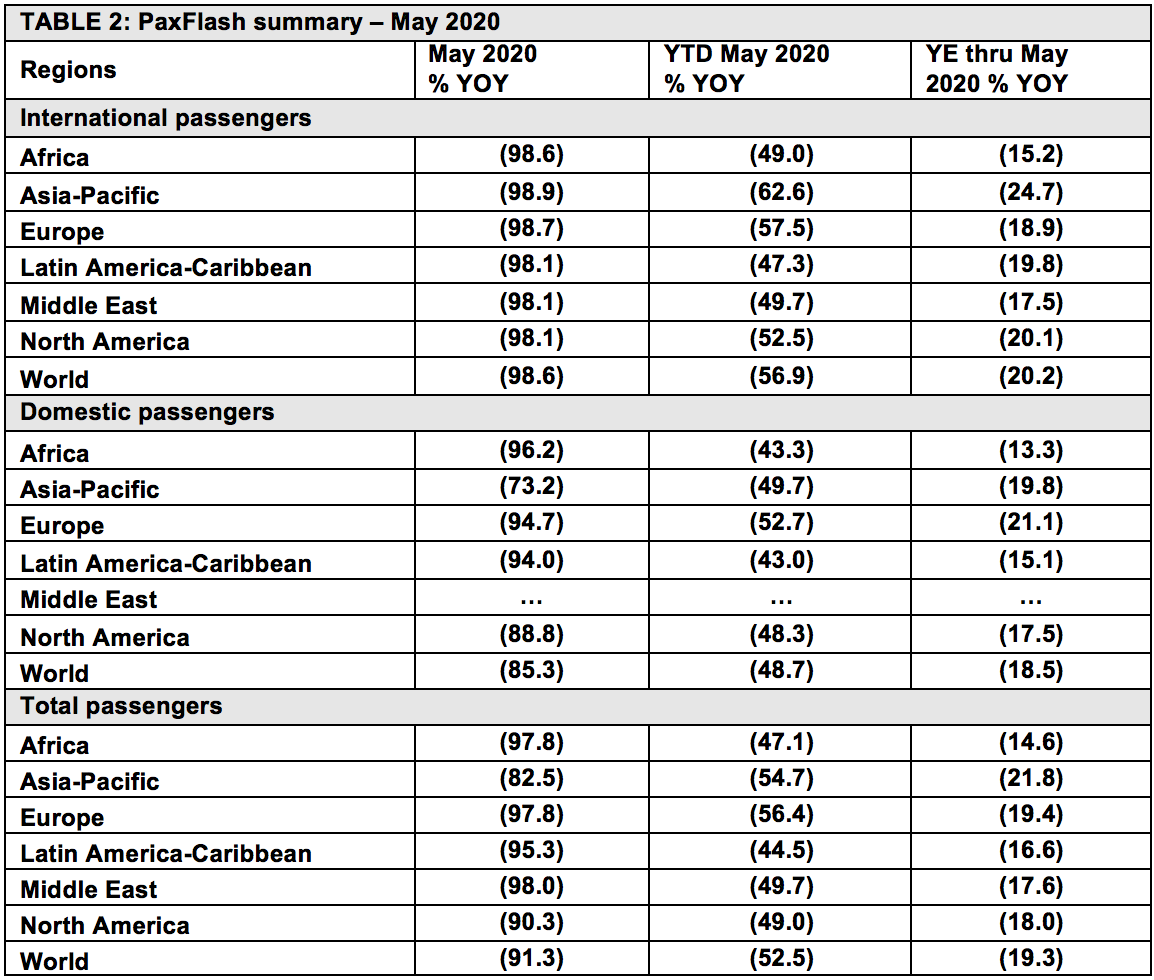 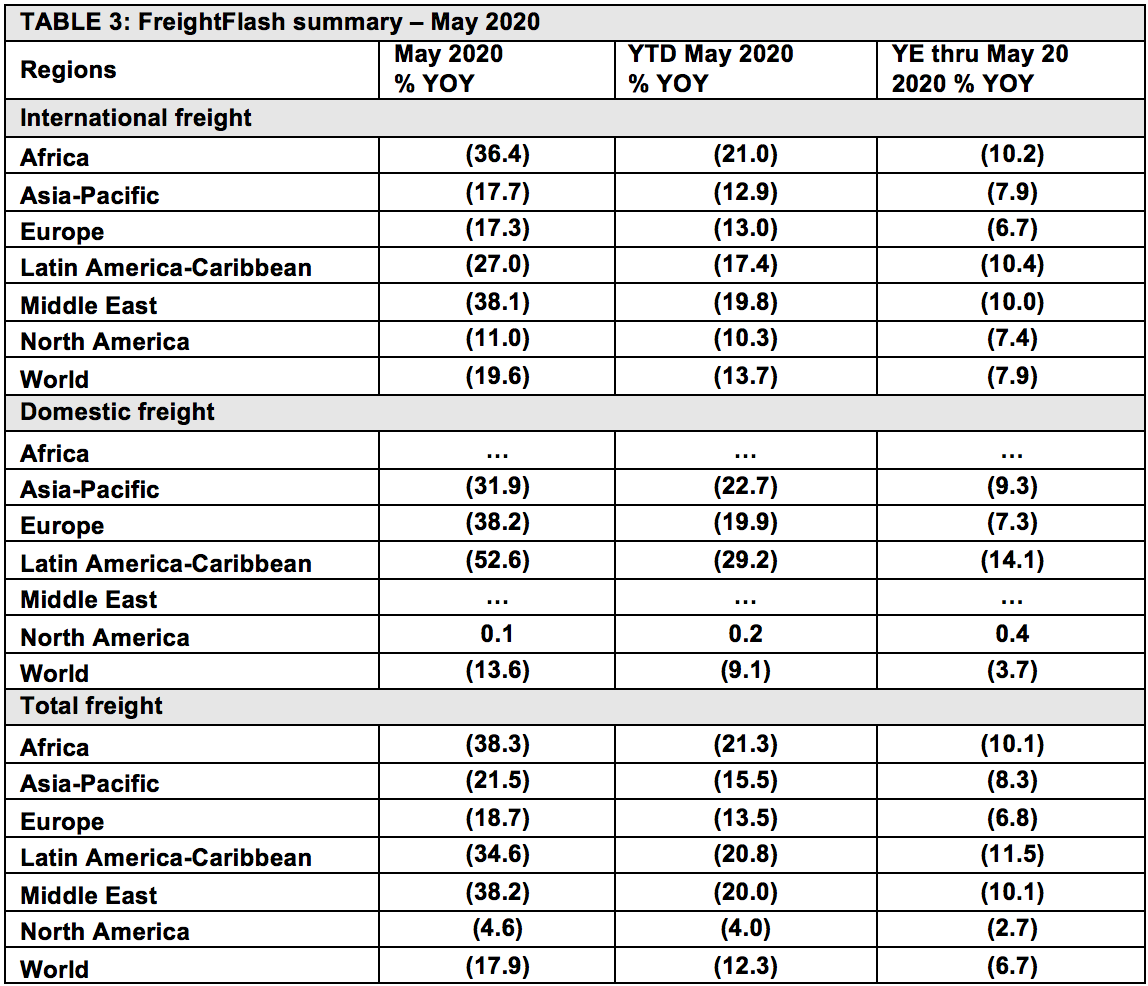