The dataset provides an illustration of a healthy aviation industry in 2019. In 2019, the world’s airports accommodated 9.1 billion passengers, 120 million metric tonnes of cargo, and more than 102 million aircraft movements.

This year’s WATR dataset contains the most comprehensive data coverage ever collected by ACI World. It includes coverage of 2,565 airports in 180 countries worldwide.

“The airports industry was experiencing a period of sustained passenger traffic growth in 2019 but, despite this consistent growth, we are now facing the worst crisis the industry has ever confronted, with crippling losses in passenger traffic and revenues due to the impact of the COVID-19 pandemic,” ACI World Director General Luis Felipe de Oliveira said. “We are, however, positive about the future of the industry because the connectivity we provide and the benefits for business and tourism represent a crucial part of the global economic recovery.

“The aviation industry directly generates 11 million jobs and around 60% of this workforce is at airports which provides the employment, social benefits and economic development for the communities we serve.

“In 2019, global air service growth remained consistent and resilient but the continuing impact of protectionism and trade wars on international air transport services was looming as the main challenge to growth in the short term. No one could have predicted that a global pandemic would bring the aviation industry to a standstill.

“Airports in some regions are making tentative steps towards recovery – in cooperation with airlines and their partners in the aviation ecosystem – but a recovery to the levels of success seen in of 2019 will be a long and difficult journey.

“Aviation is a key driver of local, regional and national economies, and direct government financial relief and assistance is urgently needed to protect operations, safeguard jobs, and support the industry’s recovery.

The dataset shows that, as regards passenger traffic, aviation’s centre of gravity was continuing to shift eastward in 2019. Most of the world’s fastest-growing large airports were in Asia – eight of the 30 fastest-growing airports with more than 15 million passengers were located in just two countries: China and Vietnam.

While airports handled close to 120 million tonnes of air cargo in 2019, the market experienced its worst year since the Great Recession recording a loss of -2.2% year-over-year. Trade tensions and new trade restrictions such as import tariffs affecting global supply chains as well as softer business and consumer confidence contributed in part to air cargo struggles in 2019.

“Cargo continues to represent a significant component of the total value of global trade as aviation transports high value goods and perishables,” Luis Felipe de Oliveira said. “Now, during the pandemic, airports are playing an even more important role, supporting cargo operations and providing goods and services for the health of the people and communities we serve.”

Overall, aircraft movements increased +1.7% in 2019 to more than 100 million movements. Global estimates show that there were, on average, 115 passengers per movement in 2019, which represents a year-over-year increase of +1.8%. 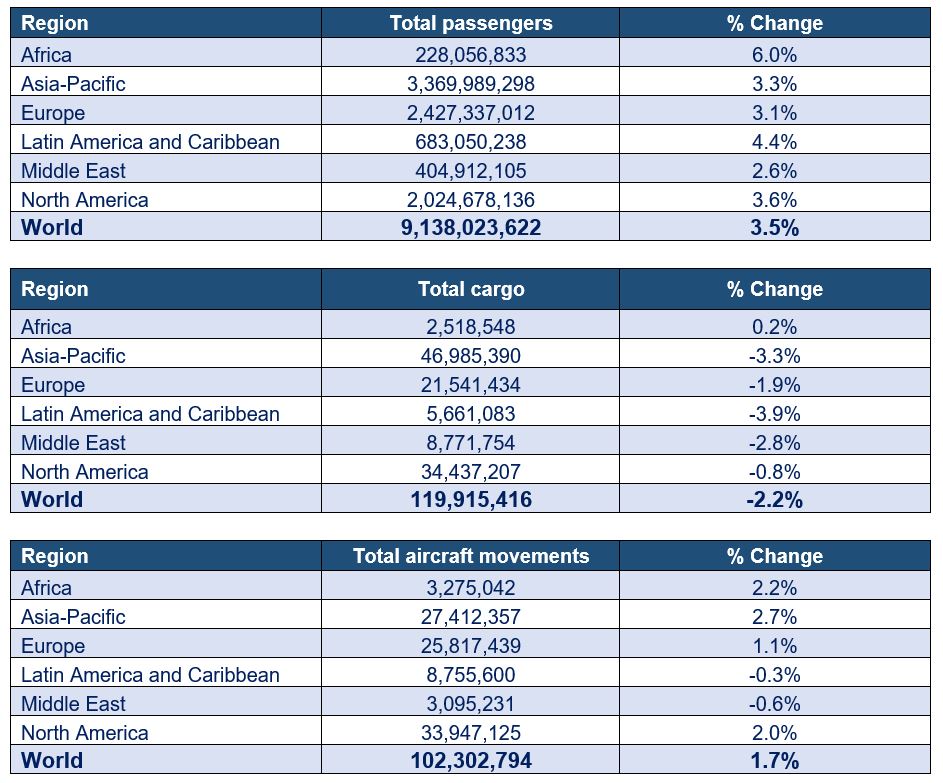