Financial assistance and relief is needed to underpin industry recovery

Montreal, 3 July 2020 – Airports Council International (ACI) World data has revealed that global passenger traffic declined by an unprecedented -94.4% year-over-year in April as a result of the unfolding COVID-19 pandemic. This followed an already dramatic drop of -55.9% in March, representing the worst decline of global passenger numbers in the history of the aviation industry.

Global passenger traffic experienced an overall drop of -41.8% for the first four months of 2020 with the 12-month rolling average for the global industry continuing to decline – it was recorded at -11.3% by the end of April, without signs of consistent recovery in the future months.

The effect on the air freight industry was still not yet as significant in April when compared to the passenger market. Global air freight volumes declined by -22.6% compared to April 2019 resulting in a -10.8% drop for the first four months of 2020. The global 12-month rolling average continued its negative trend to sit at -5.3% by the end of the month.

In the face of these losses, airports in some regions are now embarking on the first steps in restarting operations and make plans for a sustained, long term recovery. To underpin this recovery, ACI World has said that financial assistance and relief is needed to safeguard essential operations and protect millions of jobs generated by the airport industry and all sectors in the ecosystem. Airports are key generators of sustainable economic development and the impact in the communities they serve have been catastrophic.

“April was devastating for the aviation industry as global air travel almost came to a complete halt as national governments made unilateral decisions to implement strict confinement measures in the second week to contain the COVID-19 outbreak heavily affecting the movement of passengers,” ACI World Director General Luis Felipe de Oliveira said. “Coordinated actions must be planned in supporting the industry restart to avoid the lack of coordination we faced as the restrictions were first applied on travel around the world

“As in previous months, global air freight volumes have not been affected to the same extent as passenger traffic. Recently converted passenger aircraft into temporary freighters helped the cargo industry to move time-sensitive shipments and vital supplies, including urgent medical supplies, and goods to support the global economy.

“There were some early signs in April was the lowest point of the crisis and the beginnings of recovery could be seen in April’s figures for the Asia-Pacific, but the recovery remains uncertain.

“Airports, like other industry sectors, need urgent relief and assistance to help them as they begin to restart operations, to navigate the far-reaching economic ramifications of the crisis, and help lay the foundation of a balanced recovery. Any policies supporting the reduction of income from airports or a blanket slots waiver will damage the ability of airports to lead the industry recovery which includes several sectors working within the airports ecosystem.

“Airports continue to face high fixed costs, rising costs related to health measures at airports, and the challenge of creeping increases in the cost of capital. ACI World believes Government assistance is needed to address these costs, to help safeguard essential operations, and protect millions of jobs.

“Indeed, ACI and IATA recently called for the cost of any health measures that are required to be borne by governments.”

Global international and domestic markets posted unprecedented declines falling by -98.9% and -90.7%, respectively. The 12-month rolling average for the international segment was recorded at -11.4% and the domestic sector at -11.1%.

All major regional markets posted declines above -95% of their global passenger traffic, except for Asia-Pacific, where the domestic segment started to show a fragile sign of recovery. Globally, Asia-Pacific recorded a -87.7% decline compared to last year.

International passenger traffic almost came to a halt with all regions recording decline above -98%.

Domestic passenger markets were also severely affected by the ongoing crisis. North America, the second largest domestic market in the world, was hit hard with a loss of -95% of its traffic volume. In contrast, the start of a recovery in the Chinese domestic market, as well as in other countries like Australia, helped Asia-Pacific to record the lowest but still very significant decline of -81.0% in April compared to the prior year.

The impact of the COVID-19 outbreak was severe across all major freight markets except for North America, thanks to a robust domestic freight market. Globally, air freight volumes were reduced by almost a quarter in April, with a drop of -22.6% compared to April 2019.

Significant losses were recorded in Latin America-Caribbean (-44.5%), Africa (-45.8), and Middle East (-47.6%). Asia-Pacific (-26.0%) and Europe (-26.5%) are in line with global volume losses. North America, on the other hand, recorded a less significant drop of -4.5% in total freight volumes mitigated by an increase in domestic traffic of +3.3%. North America’s international freight market, however, continues to show signs of weakness by falling -16.0% for the month of April.

The international air freight market continued to move deeper into negative territory in April with a loss of -26.4% compared to the of the previous month’s decrease of -15.7% in March. For the fourth consecutive month, domestic freight continued its downward trend reaching -13.8%. As a result, year-to-date air freight figures for April, as well as the 12-month rolling average, posted significant declines at -10.8% and -5.3%, respectively. 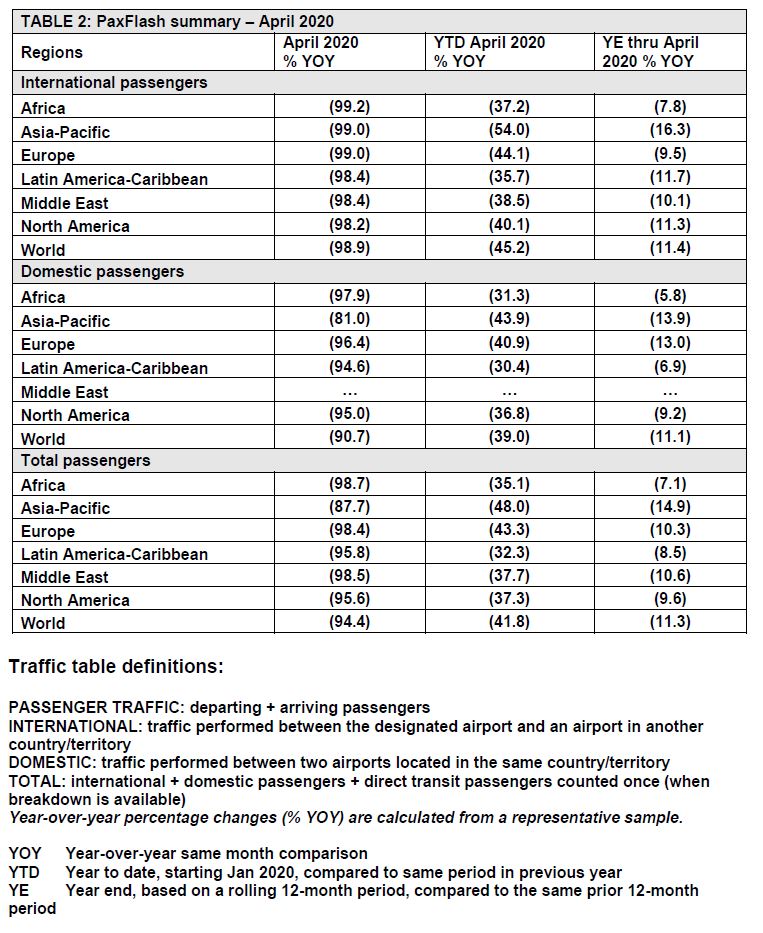 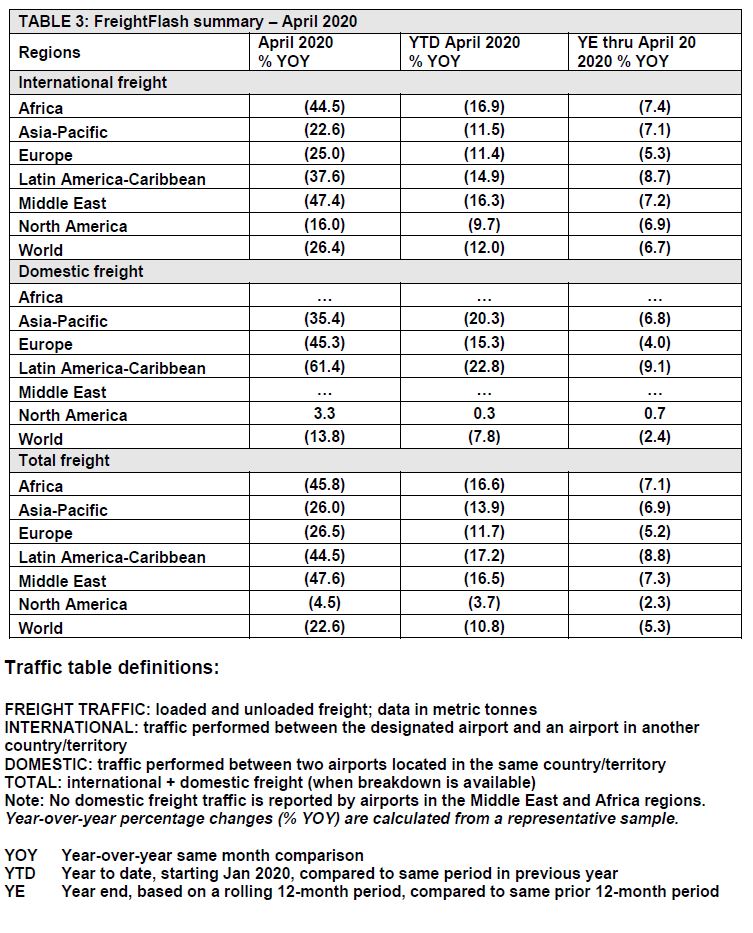