Montreal, 5 June 2020 – Airports Council International (ACI) World reports that global passenger traffic declined by -55.9% year-over-year by the end of March as a result of the unfolding COVID-19 pandemic. This followed a drop of -10.7% in February.

Global passenger traffic experienced an overall drop of -22.7% for the first quarter of 2020. The 12-month rolling average for the global industry entered negative territory, recorded at -3.1% by month’s end.

The effect on the freight industry were not yet as significant in March, with global volumes declining by -14.4% compared to March 2019 and resulting in a -6.9% drop for the first quarter of 2020. The global 12-month rolling average continued to be negative at -3.8% by the end of the month.

“The second week of March was a turning point for the reaction to the COVID-19 pandemic as national governments implemented strict confinement measures which brought the industry to a virtual halt,” ACI World Director General Angela Gittens said.

“While the crisis’s impact on passenger traffic was mostly in the Asia-Pacific in February, March figures showed its spread across the world, affecting both domestic and international markets.

“Global freight volumes have not been affected to the same extent as passenger traffic. The need to move time-sensitive shipments and vital supplies, including urgent medical supplies, and goods to support the global economy, helped the freight industry avoid the level of declines in demand experienced by the passenger traffic segment.”

Global international and domestic markets posted unprecedented declines falling by -62.4% and -50.6% respectively. The 12-month rolling average for the international segment was recorded at -2.6% and the domestic segment at -3.4%.

Among major regional markets, Asia-Pacific continues to be the most impacted with declines of -77.6% in March for its international market and -54.4% to its domestic market. The Middle East recorded a loss of -58.6%.

North America and Europe were also badly affected by the ongoing crisis losing more than half of their international traffic in March (-50.4% and 60.1% respectively). Those significant losses brought the 12-month rolling averages to -7.7% for Asia-Pacific, -1.1% for North America and -1.8% for Europe.

Africa’s gains in the first two months of 2020 were erased by significant losses in March (-46.0%) bringing its total passengers’ figures for the first quarter to -11.1%. Latin America-Caribbean’s good performance in the beginning of the year was offset by a loss of -41.1% in March compared to the prior year.

The international freight market moved significantly into negative territory in March with a loss of -15.7% compared to the slight gain of +0.4% in February. For the third consecutive month, domestic freight continued its downward trend reaching -11.1% for the month down from -2.4% in February and -4.4% in January. As a result, total freight figures for March as well as the 12-month rolling average posted significant declines at -14.4% and -3.8% respectively.

The impact of the COVID-19 pandemic has started to appear in all major freight markets. The global double-digit decline posted in March was mostly driven by Asia-Pacific (-17.2%) and Europe (-16.4%). North America, on the other hand, recorded a less significant drop of -6.6% in total freight volumes mitigated by a relatively modest decrease in its domestic traffic of -1.6%. North America’s international freight market, however, showed signs of weakness in falling by -13.8% for the month of March. 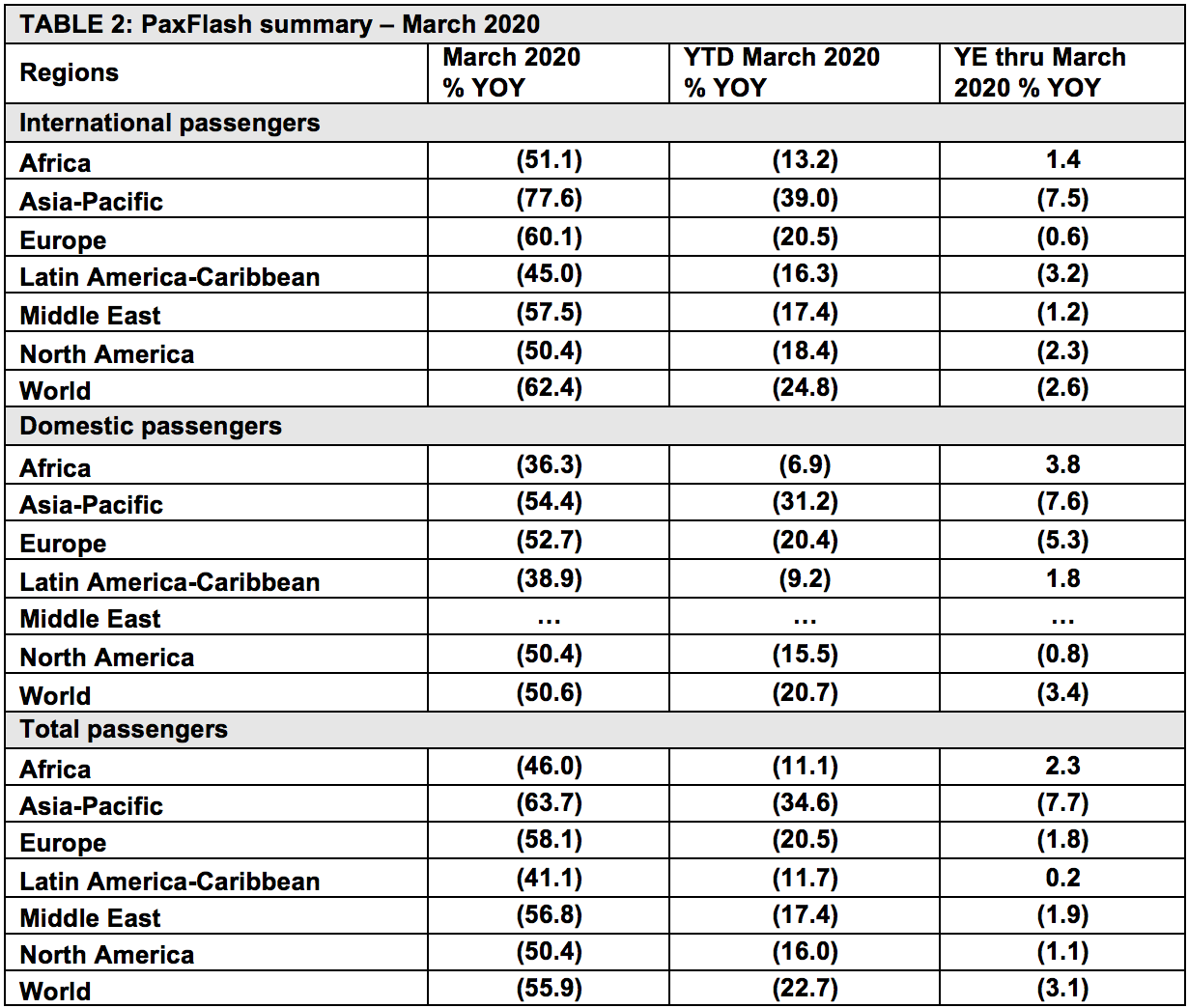 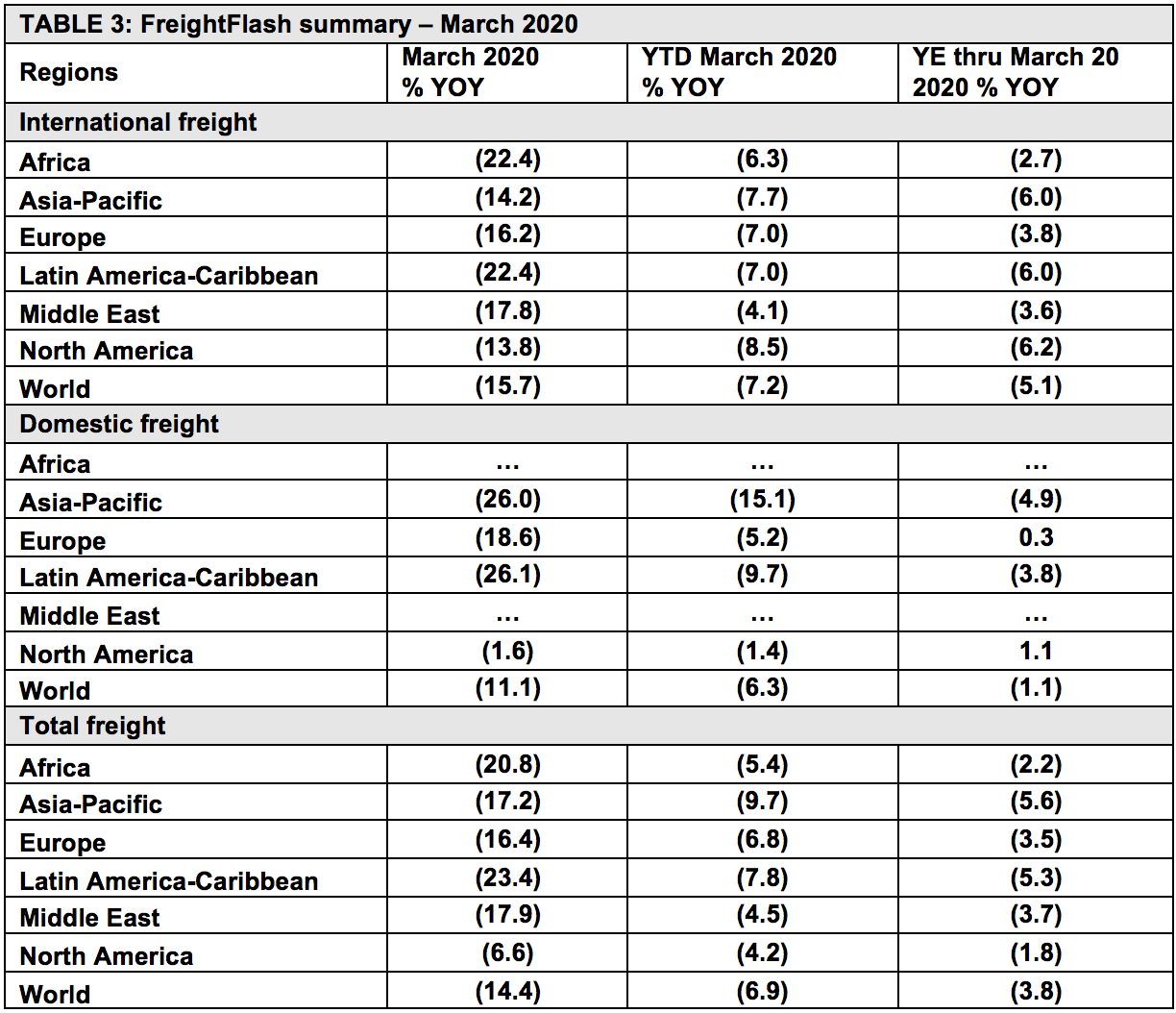