Economic impact assessment of COVID-19 on the airport business

Montreal, 5 May 2020 – The ongoing COVID-19 pandemic has resulted in a full-scale transportation crisis with the imposition of travel restrictions and suspension of flights in a global effort to contain the spread of the virus. Aviation has been brought to a virtual halt and the industry is in survival mode, crippled by the loss of traffic and revenues.

The unique feature of the ongoing crisis is the fact that both the supply and the demand sides of the equation are suppressed. On one hand, most flights are suspended, and travel is severely restricted while, on the other hand, air transport demand, particularly the passenger segment, has collapsed. The latter is a result of an idiosyncratic combination of economic and behavioural factors. The deteriorating macroeconomic situation and loss of income is added to by consumer concern that they may be susceptible to contracting the virus if they fly. Either and both conditions lead to avoidance or postponement of travel plans.

According to the recently released report from the World Tourism Organization (UNWTO), the United Nations’ agency for tourism, as of end of April, 100% of destinations now have restrictions in place. As well, 83% have had COVID-19-related restrictions in place for at least four weeks previous. More specifically, the analysis based on 217 destinations worldwide reveals the following:

Chart 1 shows three key types of travel restrictions on a global scale due to COVID-19. 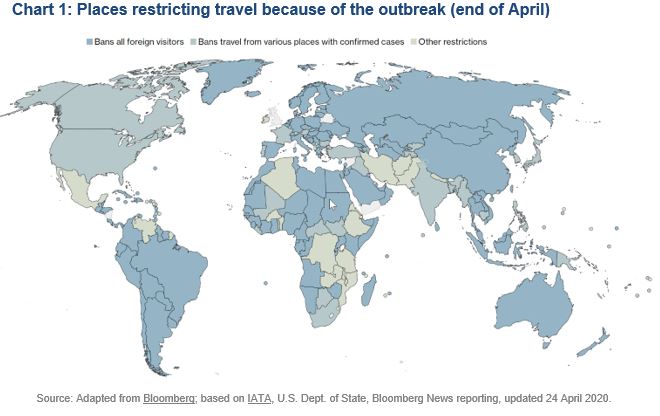 At the airport level, the ICAO Global COVID-19 Airport Status reveals the list of restricted airports and those airports that are fully closed to commercial air services.

The recent figures from the International Monetary Fund (IMF) published in the April 2020 Update of the World Economic Outlook (WEO) illustrate the economic fallout, with an estimated decline in Gross Domestic Product (GDP) of at least 3 percentage points on a global scale.

The estimates also suggest that the brunt of the decline in global output will be concentrated in the advanced economies, though emerging markets and developing economies will not be immune to the economic ramifications (-6.1 and -1 percentage points respectively). See Table 1, below.

Nevertheless, the aggregate economic figures tend to mask the catastrophic situation in air transportation. As classified by consulting companies and rating agencies, air transport is one of the hardest-hit industries by the decline in revenues and stock price of its leading companies.

This third economic impact assessment takes an evidence-based approach in portraying the current status of the industry in terms of passenger traffic and revenues taking into account the latest data collected from world’s airports and an array of other inputs from ACI regional offices and industry experts. 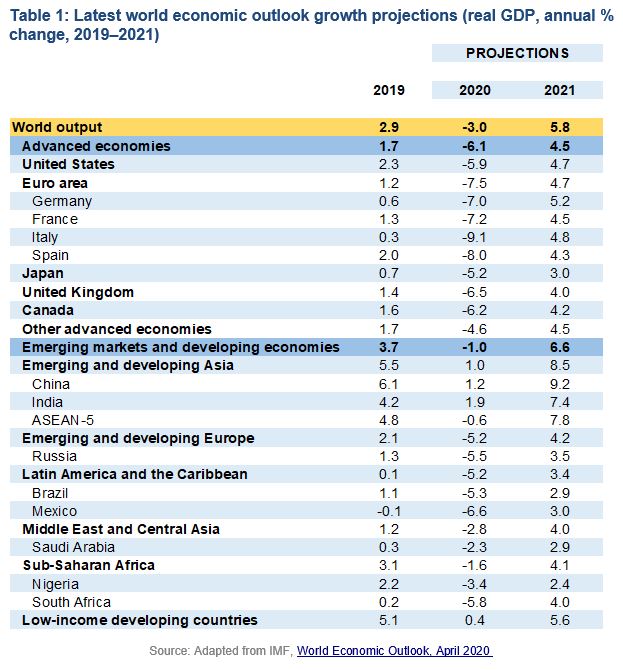 Even though traffic growth started showing signs of a slowdown, it was a natural reflection of the late stage of the business cycle, characterized by moderating economic growth, falling corporate profits, slowing sales and growing inventories. In the beginning of the year, the world’s leading economy — the United States — documented 126 consecutive months of growth, the longest economic expansion in its history. As such, further moderation in the global economy and consequently air transport demand was expected in response to overheated markets.

Nevertheless, ACI had forecasted that global passenger traffic would reach the 9.5 billion passenger mark in 2020, reflective of a +4.6% forecasted growth year-over-year.

The global passenger traffic forecast had been slashed to 9.3 billion passengers, equivalent of +1.6% growth year-over-year, however. As the COVID-19 outbreak started to unfold in Asia-Pacific from the beginning of the year, continued in Europe, and eventually spread across the globe affecting practically all countries and aviation markets, it became clear this year that such volume of traffic is unattainable.

However, the second week of March came as a game changer, whereby an overwhelming majority of national governments implemented strict confinement measures which eventually resulted in what the IMF later characterized as the “Great Lockdown”—the worst economic downturn since the Great Depression.

The most comprehensive traffic figures collected from the world’s airports demonstrate that the COVID-19 impact on aviation was rapid, as global passenger traffic grew by just +2% in January 2020, down from +3.7% a month prior and below the average growth rate recorded in the preceding six months (+2.6%). Decreased traffic volumes were more apparent in the Asia-Pacific region at -1.5%.

The passenger traffic decline in February was even more pronounced, as Asia-Pacific witnessed a substantial traffic loss of –38.4%. Consequently, the world’s airports recorded a combined decline of -10.7%. As the COVID-19 outbreak had been rapidly progressing in other regions, the imposition of travel restrictions and national lockdowns brought aviation to a virtual standstill by the end of March.

On a global scale, passenger traffic declined by -56.8% in the month of March year-over-year and by -58.6% as compared to the previously projected volumes under a pre-COVID-19 baseline. In the first three months of 2020, passenger traffic showed a decline of -28.4% versus previously projected volumes and by -26.2% year-over-year as compared to 2019. The steepest reductions were recorded in Asia-Pacific, Middle East and Europe of -38.9%, -28.1% and -22.4% respectively.

The second quarter started to reveal even grimmer situation for air transport and consequently, the resultant impact on airports.

The second quarter was truly unprecedented: 17,000 wide bodies, narrow bodies and regional jets, or about two-thirds (64%) of the global fleet, remained on the ground.

From an air traffic management perspective, traffic in most regions declined by more than -80%, with regional movement declines varying from a -90% decline in South America to a -56% decrease in North America—testament to the higher resilience of domestic traffic in light of severe restrictions on international flights.

Nevertheless, even these figures do not represent the complete picture of the ongoing calamity in air transport as many airlines continue flying near-empty aircraft.

As for airports, passenger traffic volumes declined by 90% in April on a global scale, ranging from -97% in Europe to -70% in Asia-Pacific. Assuming only slight improvements in aviation activity with slow and expected gradual removal of travel restrictions in few aviation markets as we approach the summer months, the estimated passenger traffic volume decline is expected to dive further.

This is illustrated in Chart 2 and Table 2 below. On a global scale, airports are expected to lose more than 2 billion passengers in the second quarter of 2020 alone and 4.7 billion for the whole of 2020. In all six regions, the decline exceeds -84% from the projected baseline in the second quarter, and goes beyond -90% in the Middle East, Latin America-Caribbean and Europe. 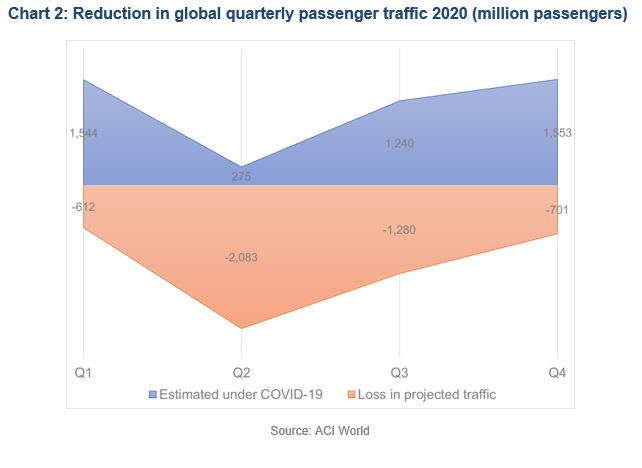 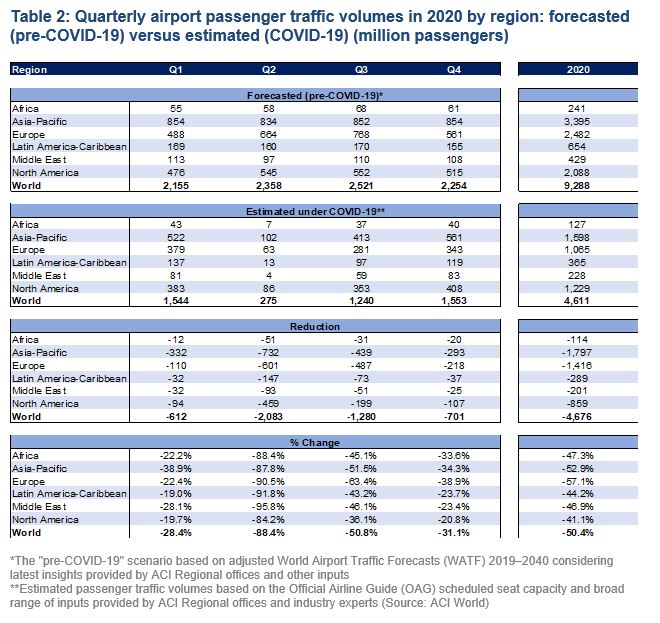 Even though the state of aviation under COVID-19 differs from one country to another and different regions are affected to varying degrees, two patterns play a major role:

Evidence suggests that aviation markets with a significant share of domestic operations, which are often characterized by vast geography and sizable populations, are more resilient in the face of the ongoing health crisis.

China and the United States exemplify this pattern, as both countries continue to display a modest number of domestic flights. The major international aviation markets, on the other hand, demonstrate in general much deeper declines in traffic volumes. 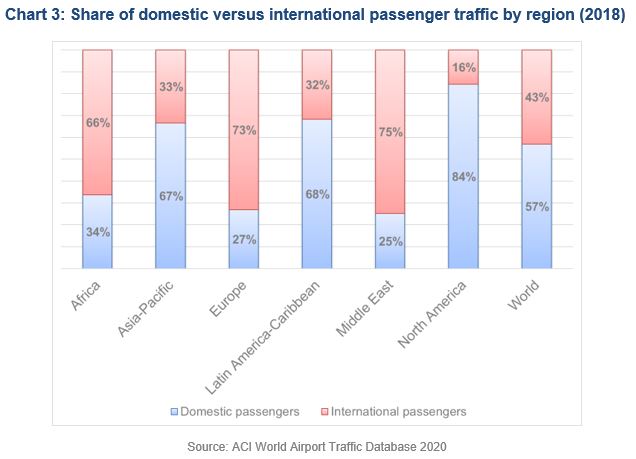 As for seasonality patterns, these differ from one region to another, but two regions sit on the opposing ends of the spectrum. In Europe, monthly passenger traffic variations reflect the mainstream holiday period from May to September and movements from north to south. Asia-Pacific, on the other hand, is known for a relatively stable seasonality pattern and most major airports show negligible seasonal variations.

As the COVID-19 continues to unfold in Europe and North America, which are the second and third largest aviation markets respectively and are tightly interrelated with transatlantic routes, there is an additional downside risk to the recovery.

A prolonged health crisis may translate into a “lost summer” for the European airports, particularly those in the Mediterranean countries as well as the airports in the Central and Northern Europe. Airports in North America and the Caribbean are also likely to suffer from hampered demand for international vacations, from the outbound and inbound traffic perspective, respectively.

Seasonal airports that had economic challenges even during normal times may lose a higher share of annual passenger traffic.

Chart 4 illustrates higher exposure of Europe to seasonality and hence a higher potential impact of COVID-19 on the year-end traffic results. 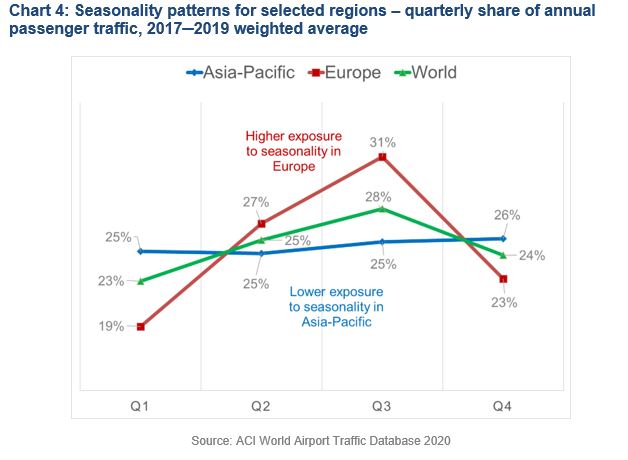 Both revenue streams are vital to support the operation and sustainable development of airports.

They are used to recover the large capital costs incurred by airports as the airport industry is highly asset-intensive, as well as operating expenses and especially staff expenses.

Revenue channels are paralyzed by the unprecedented reductions in aviation and commercial activity.

The fall in the number of passengers and flights has resulted in reduced revenues from airport charges (landing and parking charges paid by airlines for instance, and passenger service charges and security charges paid by passengers).

Non-aeronautical sources of revenue usually provide diversification of airport income streams and serve as an additional cushion during economic downturns.

In a similar way, revenues from commercial activities have plummeted forcing many outlets to shut down.

Airports are, at the same time, taking all possible measures to preserve financial stability. They are reducing, to a minimum, variable costs by closing portions of infrastructure, furloughing staff, and postponing capital expenditure.

These difficult decisions represent serious impacts for the communities that airports serve. They are not taken lightly but are necessary in response to the crisis.

As can be seen in Table 3, the reduction of revenues from the projected baseline is likely to reach -90% on a global level in the second quarter of 2020.

Europe is expected to be the hardest-hit region as it may lose close to $37 billion (figures in US Dollars) in revenues or more than 60%, followed by Asia-Pacific with $29.4 billion or -59%. 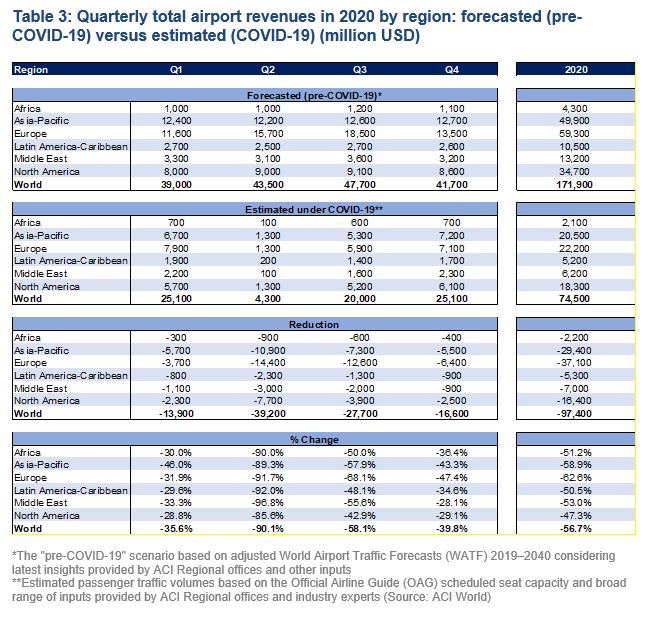 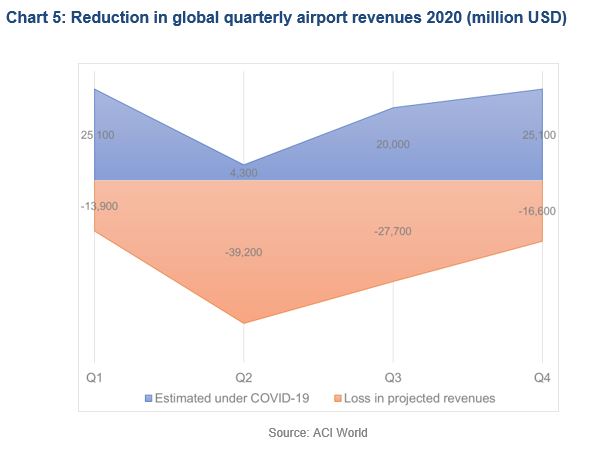 The main limitation of such methodology is that is does not consider additional factors affecting traffic volumes in parallel with COVID-19, such as macroeconomic ramifications of the ongoing crisis, changes in consumer behaviour and other structural shifts. As such, a fraction of the traffic and revenues losses can be accounted for factors either completely unrelated to COVID-19 or induced by COVID-19.