Freight market showed some signs of recovery by year’s end

While the figure marked a positive end to 2019 after a challenging year for the air transport industry, it comes as the effects of the ongoing COVID-19 outbreak start to appear in traffic results in 2020.

Based on a preliminary sample of major commercial airports data tell us that airports experienced +3.4% growth in total passenger traffic, continuing a moderation trend compared to 2018’s +6.4%.

The freight industry’s preliminary end-of-year results stood at -2.5%, close to six percentage points below the +3.4% figure posted in 2018. While a slow recovery in freight volumes had begun in the last three months of the year, that uptrend will be affected by the ongoing global public health emergency.

“Though a recovery for the freight industry was starting to emerge in the later part of the year, we now face a health crisis that could stifle the uptrend and lead us into another volatile year in 2020.

“The developing situation may not be a momentary shock to the air transport industry; rather it has the potential to produce a significant shift in this year’s global economic growth trend.”ACI collects and analyses data from a significant sample of airports that provide regular reports on month-by-month passenger and air freight statistics; this forms part of the world’s most comprehensive source for airport data.

North America and Asia-Pacific both departed from the moderating trend of prior months in December, gaining +6.4% and +6.0% respectively on a year-over year basis, with the regions’ international and domestic segments both performing well. The two regional markets remained in line with the world average for full-year growth, at +3.4% and +3.0% respectively.

Europe’s performance was more tempered in December, gaining +2.8% on a year-over-year basis and ending the year at +3.2%. The region’s domestic market dragged down its monthly results, declining for the sixth consecutive month, at -1.8% in December and reaching -0.2% for 2019.

In emerging regional markets, Africa continued to perform particularly well. Its December growth rate reached +6.0%, close to its preliminary year-end figure of +6.7%. Both its domestic and international segments have been growing at a similar rate in 2019, ending the year with +6.8% and +6.5% respectively.

The Middle East gained +4.6% in December, bringing its year-end result to +3.3%. Latin America-Caribbean, its domestic market offsetting weak performance in its international segment, grew by +3.1% during the month, ending the year with +3.7% growth.

December figures, on a year-over-year basis, were relatively encouraging for the freight industry. Domestic freight saw a surge of six percentage points during the month, reaching +4.5% on a year-over-year basis. The segment’s year-end results reached +1.3%. International freight remained in the negative during the month, posting a -2.1% decline. The year-end results for the segment stood at -4.1%.

Though Asia-Pacific posted a +1.4% gain in December, its preliminary year-end results remained quite far below other major markets, at -4.3%. Europe followed at +0.6% for the month, its end-of-year figure reaching -2.4%.

North America posted +0.2% in December and ended the year with -0.5%, supported by its strong domestic market. Though the region’s growth trend has been volatile in the last six months, it has remained the best -performing major market in 2019.

In emerging markets, December was a rather difficult month. The Middle East declined by -4.5% over December 2018, reaching -2.8% for the whole of 2019. Africa declined by -4.7%, bringing its year-end result to -0.2%. Latin America-Caribbean suffered a particularly strong downtick in December, at -5.5%, due to a weakening international market. The region’s year-end result stood at -3.5%.

“The month’s figures may be showing the calm before the storm,” Angela Gittens said. “Though forecasts on global economic growth in 2020 had originally predicted a recovery from 2019’s weaker performance, the sudden shock represented by the COVID-19 outbreak could stifle that recovery and prolong the period of downward pressure on the air freight industry.” 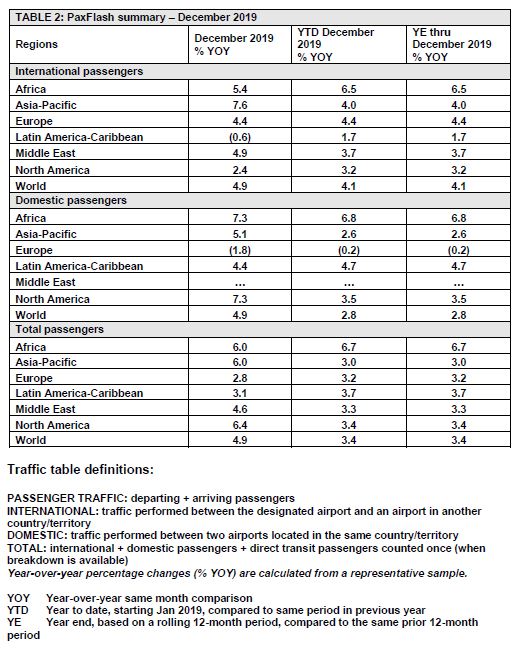 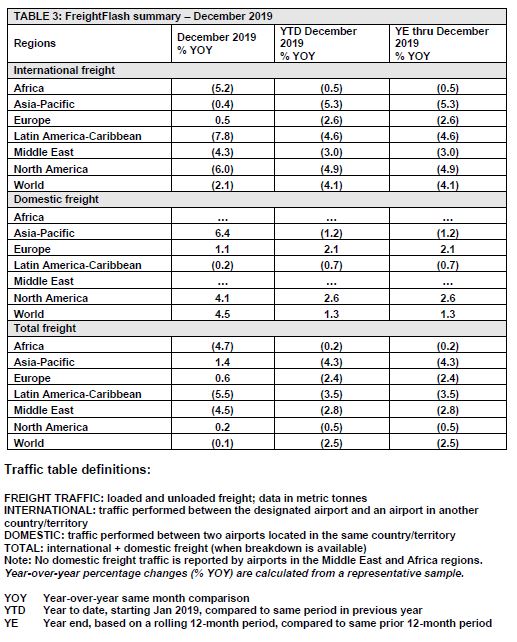