This compares to October’s figures of +2.3%, leading the industry towards a gradual decrease in growth rates in 2019. The results are a continuation of a moderation trend that started in July, with November year-to-date growth standing at +3%.

The freight industry’s difficulties lessened somewhat in November, with global volumes only declining by -2%, up from a -2.9% drop in October. November’s year-to-date change stands at -3%, with seemingly no chance left of returning to positive territory before the end of the year.

“We expect global passenger traffic growth to hover around +3% for 2019, compared to +6.4% in 2018,” ACI World Director General Angela Gittens said. “The year has been particularly difficult for air freight, with the industry gaining around +3% last year and trending towards -3% for 2019, a drop of 6 percentage points.

“Considering the shock to the global economy generated by the multiple trade tensions flaring up, it is fair to say the situation could have been much worse. Current forecasts suggest that world economic growth should remain moderate in 2020, but still show an acceleration compared to 2019’s slowdown.”ACI collects and analyses data from a significant sample of airports that provide regular reports on passenger and air freight volumes, forming part of the world’s most comprehensive source for airport data.

The international passenger market continued to outpace the domestic market in November, gaining +2.7% on a year-over-year basis, while domestic traffic slowed to +1.2%. Year-to-date growth for the two segments currently stand at +4.1% and +2.3% respectively.

The Asia-Pacific region gained +2.4% in November compared to the previous year, bringing its year-to-date results to +2.3%. A sudden increase in domestic traffic fueled most of that growth, the segment gaining +2.7%, raising its year-to-date to +1.5% in 2019.

The most significant portion of the moderation experienced by the domestic segment in November was due to North America’s market slowing down to a mere +0.1%, in line with its total passenger market results. Year-to-date growth for the region was still relatively robust at +3.2%, however.

November results showed a slight easing in the current downturn affecting the air freight industry. Total freight volumes fell by -2% in November, up from -2.9% in October. The results brought year-to-date decline to -3%, with only one month of data left to compile in 2019. The international segment saw a particularly large uptick, only falling by -1.8% on a year-over-year basis, compared to October’s -4.5%. The resulting year-to-date figure went sideways, however, standing at -4.4%.

Domestic freight was a drag on the improvements generated by the international segment, dropping significantly in November. The former declined by -2.5% during the month, bringing its year-to-date figure to +0.4%. Unless that drop in domestic freight volumes reverses in December, the chances of the segment following the international segment in posting declining volumes for 2019 is quite high.

Europe remained in negative territory in November, with volumes falling by -0.2%, bringing year-to-date growth to -2.5%. The year-to-date figure was mostly in line with the region’s international freight market, which represents most of its market, and which stands at -2.7%.

Asia-Pacific posted a decline of -1.5% in November, after a much more difficult month of October (-4%). Year-to-date results are still at -5.1%, having fallen much more than the other major regional markets in 2019.

Here again, North America posted the lowest growth figure among major markets. The region’s total freight volumes fell by -4% during the month, to reach -0.8% on a year-to-date basis. Still, end-of-year growth for the region should remain much higher than its regional peers.

The Middle East’s freight volumes fell by -1% in November, while Latin America-Caribbean declined by -2%. The two freight markets remained in comparable territory on a year-to-date basis, however, at -2.9% and -3.3% respectively.

Africa, despite the success of its passenger market, suffered a substantial decline in November, falling by -4.5%. The region remained the only market with a positive year-to-date result, at +0.2% with only December left to go. The region started 2019 with particularly strong numbers, but akin to North America, July marked a trend change for its freight market. 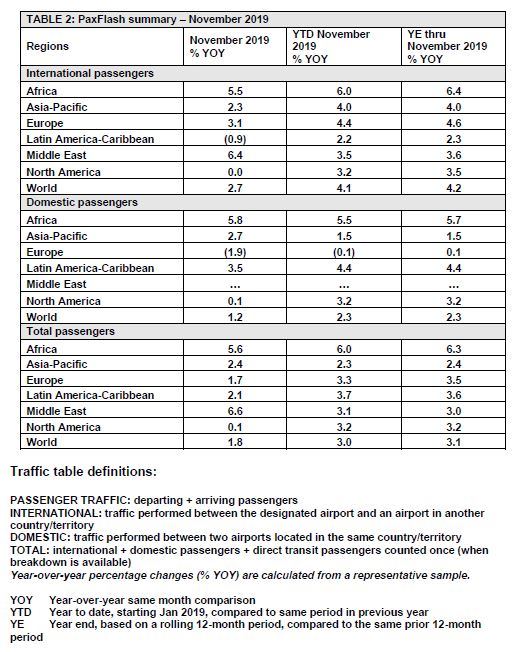 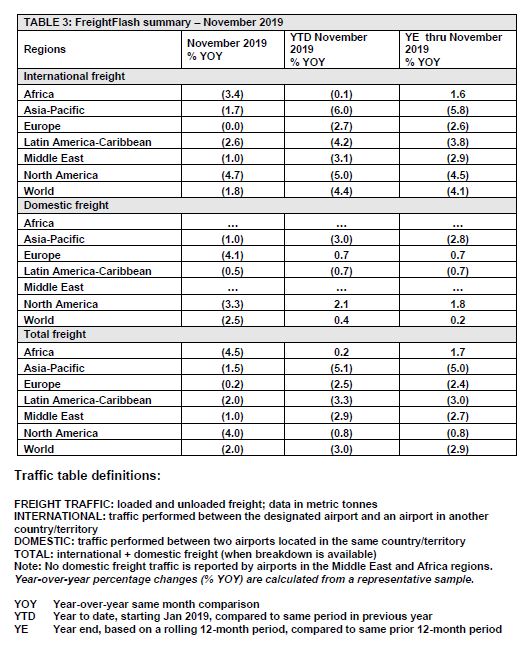