Domestic freight remains in positive territory despite the industry slowdown

The figure remained in line with the moderation pattern observed since June, since which growth rates for the industry have hovered between +2% and +3%. Year-to-date growth was recorded as +3% with only two months left to examine in 2019.

Against a global economic backdrop that remains quite challenging, the decline in the global air freight industry continued in October, falling by -2.9% on a year-over-year basis. This was a slight improvement over September’s figure of -4% and was quite close to the industry’s year-to-date result which stands at -3%.

“A weakened freight industry and a moderation in passenger traffic growth was recorded in October which was mostly a continuation of the general trend in 2019,” ACI World Director General Angela Gittens said. “The domestic freight market managed a slight recovery but with the volatile trade environment still present in the global stage, end-of-year results could go either way.

“The possibility of a decline in total freight volumes by year’s end, due primarily to  international freight performance, however, is fairly assured.

North America was once-again the best-performing major market in October, posting a +3.2% year-over-year growth rate. Its year-to-date stood at +3.5%, in line with its domestic market’s +3.5%, which has remained relatively strong in a context where global growth is only +2.1%.

Europe only gained +2% during the period, just below its September’s +2.1% figure. The region’s year-to-date growth stood at +3.4%, driven by a particularly resilient international passenger segment.

Following the general trend for most of 2019, Asia-Pacific performed the worst of the three major markets. It grew +1.1% on a year-over-year basis in October, maintaining its +1.7% year-to-date growth with two months left to the year. The region’s domestic market, with strong links to its major markets such as China, India and Japan, only gained +0.2% during the month. Now standing at +0.4% on a year-to-date basis, the segment is vulnerable to fall into negative territory by the end of the year.

Africa continued to post robust gains in October. Although the month’s +5.2% was slower than September’s +6.7%, continuing a downtrend started a few months back, its year-to-date growth remains at +6.9%, and should once again be the top-ranking region for growth in 2019.

October figures showed a slight improvement over September for the freight industry, with the domestic segment posting positive growth during the period. Global freight volumes declined by -2.9% but the domestic market reached +0.7% on a year-over-year basis, maintaining year-to-date results in the positive, at +0.6%. As with September, Europe experienced the least significant decline among the major markets in October. The region’s freight volumes declined by -1.4%, bringing its year-to-date figure to -2.7%.

In line with the global downtrend, Africa, the Middle East and Latin America-Caribbean all posted declines in October. The results were less severe than in September for the first two, however, with these regions declining by -3.4% and -4% respectively. Latin America-Caribbean performed much worse, losing -8% on a year-over-year basis. By the end of the month, all of these regions stood at a negative rate for the first ten months of the year; Africa reached -0.2%, while the two other regions were both at -3.1%. 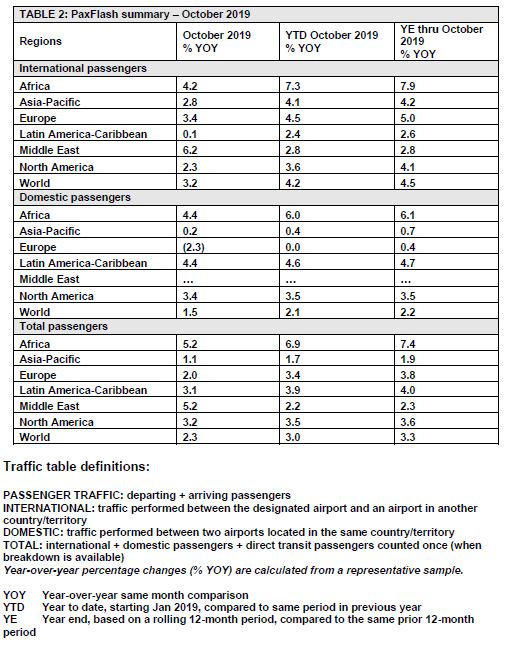 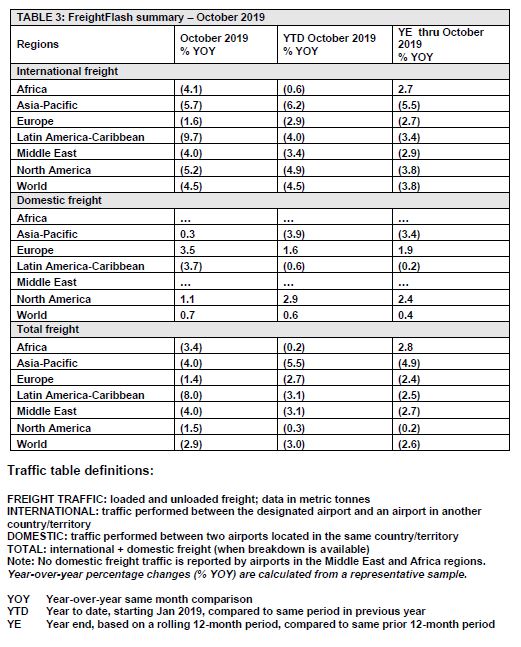