Growth in passenger market shows signs of stabilizing in September

Growth in passenger market shows signs of stabilizing in September

Montreal, 25 November 2019 – The global passenger market grew by +2.6% in September, showing signs of stabilizing after a particularly challenging 2019.

The general outlook for the air freight industry remained negative, with global volumes declining by -4.2% in September. The year-to-date figure stood at -3.1% and, with only three months left in the year, global trade growth will be difficult to achieve.

“Global passenger traffic may end up stabilizing around a figure of +3% growth by the end of 2019 which, while a significant slowdown from 2018’s +6.4%, is still a solid performance given the current geopolitical environment,” ACI World Director General Angela Gittens said.

“Trade wars, a slowing global economy and increasing social unrest around the world have created a challenging backdrop for the air transport industry. Despite this, growth is expected to start recovering in 2020 and we can remain optimistic that the new year will bring an easing of tensions in international relations between major economies.

A somewhat stronger domestic market, led by a surge in North America, helped support growth in the global passenger market in September. The segment grew by +2.4%, after posting a weaker month of August (+1.4%). The international segment, which has been on a downtrend since the start of the year, remained the main driver for the industry, posting +2.9% on a year-over-year basis. Year-to-date figures for the two markets stood at +2.2% and +4.3% respectively.

North America was the best-performing major market in September, ending the month with a +3.7% year-over-year increase. The region was only slightly below Europe in year-to-date growth by the month’s end, standing at +3.4% for the first nine months of the year. The region’s domestic market had a particularly successful month of September, gaining +4.1% versus +2.5% in August. Its international segment has continued to slow down, however, posting +1.5% for the month. The two segments are now close to parity in year-to-date growth, with international passengers having increased by +3.6% for the first nine months of the year, and domestic passengers having gained +3.4%.

Europe and Asia-Pacific posted comparable growth figures during the month, at +2.1% and +2% respectively on a year-over-year basis. Europe’s gains up to the end of Q3 remained more than twice as high as Asia-Pacific’s, at +3.6% versus +1.7%. Though the chances of an end-of-year decline in the Asia-Pacific market remain quite slim, the effects of the economic slowdown and trade wars are quite apparent in the region.

Africa gained +6.7% during the period, partly on the strength of a growing domestic market. Year-to-date results stood at +7.3% for the region. With only three months left to the year and the closest competitor standing at +4.7%, the region is poised to experience the highest regional growth once again in 2019, after gaining +9.4% in 2018, ahead of Asia-Pacific’s +8.1%.

Latin America-Caribbean and the Middle East posted growth rates of +2.7% and +2.2% respectively in September, with year-to-date results reaching +4.7% and +2.4% respectively. Latin America-Caribbean has unfortunately joined the ranks of regions affected by rising political tensions, with unrest affecting both Chile and Bolivia. The events could have an impact on October and November figures for the industry, though their overall effect on the regional market should remain minimal.

The freight industry continued its particularly difficult 2019 run in September, with both international and domestic volumes posting comparable figures at -4.2% and -4% respectively. The international market remained the major loser of the global backdrop, standing at -4.7% on a year-to-date basis. The domestic market was still in the positive with three months left to the year, at +0.4%.

Of the major regional markets, Europe had the least significant decline in September, only falling by -2.4% on a year-over-year basis. Year-to-date results stood at -2.9%, driven almost entirely by the region’s international market.

North America posted negative growth for the second month in a row, at -4.8% for the month. Year-to-date results for the region had remained positive up until August, but have finally fallen below 0%, at -0.3%. Although the North American international freight market has been declining for some time, with a year-to-date figure now standing at -4.8%, its domestic market had remained resilient to the global economic backdrop until recently. It fell by -3.3% in September after moving sideways in August. With trade discussions with China still underway and diplomatic relationships between the U.S. and numerous international partners still under strain, the chances that the region’s freight market will fully recover by year’s end remain small.

Asia-Pacific’s freight volumes declined by -3.9% in September, results that are a slight improvement over August’s -6.8% fall, but still a decline. With the region suffering the brunt of the trade wars’ impacts due to their disruption of supply chains, and an ongoing political crisis in Hong Kong, 2019 will be a particularly difficult year for its freight industry.

Once again, Latin America-Caribbean, Africa and the Middle East all posted declines of more than -5% in September, at -5.5%, -6.4% and -6.7% respectively. Africa was the only region with a positive year-to-date figure by the month’s end, at +0.3%, but its downtrend remains quite strong and it may also fall below 0% in October. 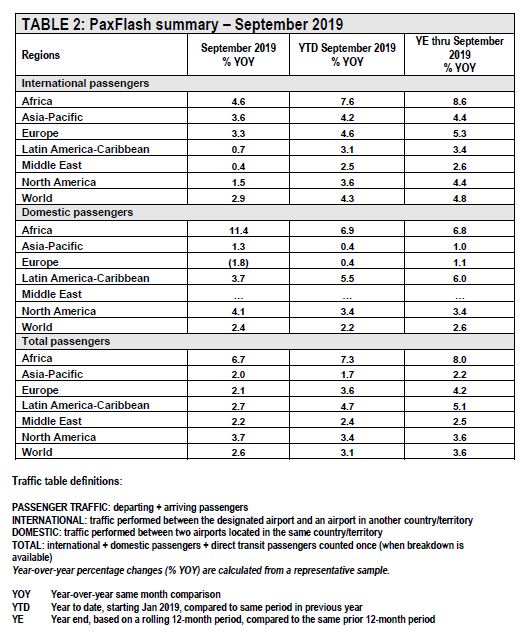 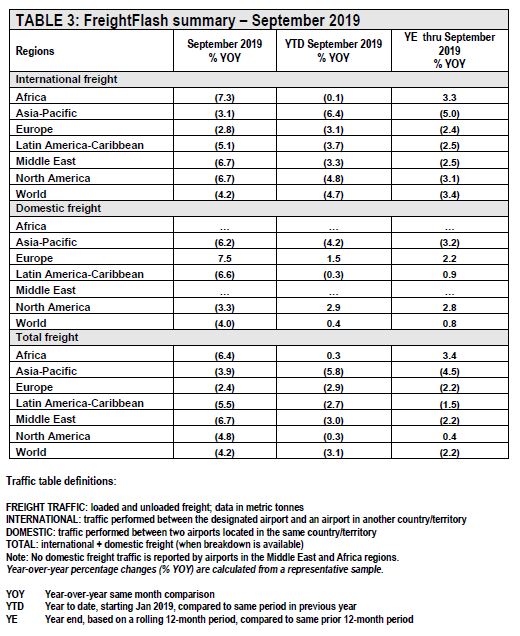