Montreal, 31 October 2019 – Airports Council International (ACI) World has found that global passenger traffic grew by a moderate +2.5% in August on a year-over-year basis which was a slight acceleration from July’s +2.3. The results brought year-to-date growth to +3.2%.

The freight industry continued to decline with global volumes falling by -5% in August on a year-over-year basis. The year-to-date figure is now -2.9% and the results marked a 10th consecutive month of negative growth.

“The industry’s overall growth has continued to suffer from downward pressure since the start of the year,” ACI World Director General Angela Gittens said. “Though the passenger market remained resilient to the downtrend for the first half of the year, it is starting to show the strains caused by the challenging global context.

“We remain optimistic that sound diplomatic and policy decisions will prevail providing better conditions for global growth but, with an ongoing economic slowdown and trade wars still prevalent, the outlook for the industry in 2019 remains challenging.

The global passenger market benefitted from a small uptick in August, gaining +2.5% on a year-over-year basis, from +2.3% in July. Its year-to-date results remained moderate, at +3.2%. The international market continued to drive much of the increase, gaining +3.6% during the month and reaching +4.5% on a year-to-date basis. The domestic market grew more slowly, at +1.4% for August and +2.1% since the start of the year.

Relatively subdued growth remained the trend in major markets, with Europe performing the best in August, gaining +2.9% on a year-over-year basis and reaching +3.8% on a year-to-date basis.

North America followed, gaining +2.4% during the month after a slower month of July (+1.9%). The region has grown by +3.4% since the start of the year, mostly on the strength of its domestic market, which is now showing signs of weakness.

Asia-Pacific grew by +1.6% in August, down from +2.4% in July. The region’s year-to-date results reached +1.8% at the end of the month, its lowest August results since 2009. Though the region’s international segment has showed more robust growth (+4.3% since the start of the year), its domestic market remains particularly subdued, now standing at +0.4% on a year-to-date basis.

After a short setback in May, the robust growth observed in Africa since the start of the year has continued. The region was the only market growing more than +3% on a year-over-year basis in August, at +6.6%. Its year-to-date reached +7.1%, close to 3 percentage points higher than the second-best performer, Latin America-Caribbean (+4.2%). The latter grew +2.8% during the month, with its domestic segment (+3.1%) outperforming its international market (+2.3%) slightly.

The Middle East performed similarly to Asia-Pacific in August, growing by +1.7%. Its year-to-date growth reached +2.0%. The situation in the Middle East has deteriorated in the last year, with rising tension between Iran and the U.S. and Saudi Arabia adding to the geopolitical strain caused by the blockade of Qatar by neighboring states.

The domestic air freight market, which had remained relatively robust in recent months despite the global macroeconomic headwinds, posted a decline in August. It lost -1.3%, down four percentage points from July’s +3.3%. Year-to-date results reached +0.9%, from +1.5% one month prior, with a fairly negative outlook for the rest of the year due to slowing manufacturing output. The international freight market continued its decline during the month, falling by -6.6% on a year-over-year basis. Year-to-date stood at -4.6% for the first eight months of the year.

North America, which has been the most successful major market in resisting the decline of the freight industry, fell by -3.2% in August. The decrease represented the region’s largest loss since February 2013 and was driven mostly by a sudden downtrend in its domestic market. While international freight in North America has remained negative in prior months (year-to-date stood at -4.6% by the end of August), the domestic market had mostly avoided the downturn. It neither grew nor declined during the month, data showing a result of 0%. Ongoing trade wars and general volatility in diplomatic relations should continue to drag on the region’s results for the coming months.

Europe fell by -3.7% in August, bringing year-to-date growth to -2.9%, still in line with the world average. Asia-Pacific continued its decline, falling by a substantial -6.8% during the month. The region’s air freight industry, which has suffered the brunt of the disruption in supply chains caused by the trade war between the U.S. and China, is now also affected by a trade and diplomatic spat between Japan and South Korea. Its year-to-date growth now stands at -5.9%, with four months left to the year and particularly slim chances to reclaim the lost ground before the year ends.

Latin America-Caribbean, the Middle East and Africa all posted declines of more than -5% in August, at -5.2%, -5.9% and -10.3% respectively. The latter, which had escaped the general downtrend for most of 2019, saw its year-to-date results fall to +0.7% during the period. Latin America-Caribbean reached -2.2% for the same time frame, and the Middle East followed with -3%. 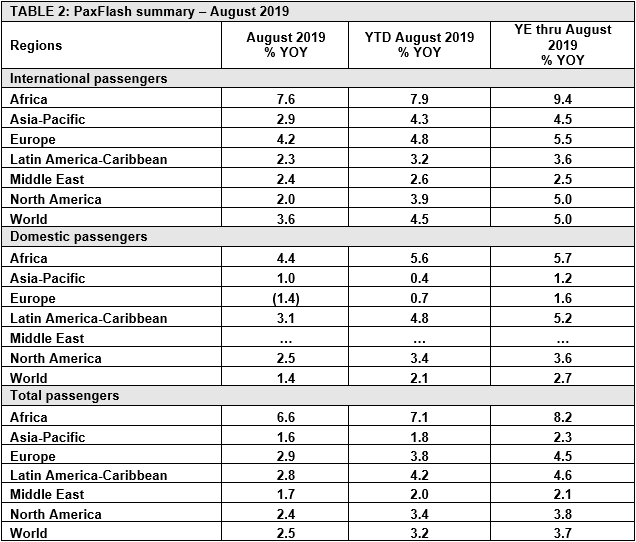 Year-over-year percentage changes (% YOY) are calculated from a representative sample. 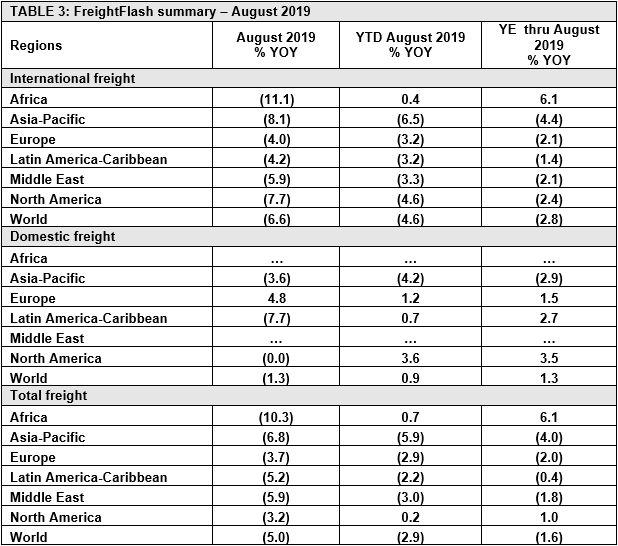 Note: No domestic freight traffic is reported by airports in the Middle East and Africa regions.

Year-over-year percentage changes (% YOY) are calculated from a representative sample.