Montreal, 24 September 2019 – Airports Council International (ACI) World has found that global passenger traffic grew by +2.3% in July on a year-over-year basis, marking a slowdown from June’s +3.9% and a continuation of the moderating trend observed since the start of 2019.

The results brought year-to-date growth to +3.4%, with five months left in the year. The freight industry showed a year-over-year decline of -2.1% in July and the year-to-date figure remained in the negative, at -2.8%.

“The possible regional impacts of trade and geopolitical tension could have a compounding effect on the aviation industry, even as the global economic slowdown depresses the freight market.

“Despite these challenges, we remain hopeful that material trends in the industry will prevent it from reaching particularly deep losses until the end of the year.”

While the international passenger market had helped prop up the global results in June, it slowed down substantially in July, posting +3.1% on a year-over-year basis, down from +5.7% a month prior. The segment’s year-to-date reached +4.6%, below its +5.2% 12-month rolling average but still strong given the global backdrop. The domestic market only gained +1.6% in July, standing at +2.5% since the start of the year.

Among the major regional passenger markets, Asia-Pacific performed the best during the month, gaining +2.4% on a year-over-year basis. The results were a shift in trend for the region, as it has been performing much slower than Europe and North America in the last months. Its year-to-date reached +2.2%, with its international passenger market (+4.3%) continuing to drive growth during a significant slowdown in the domestic market (+1.0% for the period).

Africa’s strong momentum remained in July, the region gaining +7.2% on a year-over-year basis, in line with its year-to-date growth of +7.2%, double the world average.

The domestic freight market rebounded in July, posting +3.3% after declining by -1.4% in June. The resulting year-to-date figure stood at +1.5% for the segment. International freight’s performance remained particularly weak, however. Year-over-year growth was down to -4.2% during the month, a less pronounced decrease than June’s -6.5%. Year-to-date stood at -4.5%, with five months left to the year and increasingly slim chances of posting industrywide gains by year’s end.

North America was once again an outlier in the major freight markets in July, gaining +0.8% during the month. The region’s year-to-date results reached +0.6%, now one percentage point below its 12-month rolling average. The region has certainly trended downwards in recent months.

Europe’s decline receded slightly in July, with losses of -1.6% against July 2018. Year-to-date results stood at -2.8%, in line with the world average. Asia-Pacific did not benefit from a reprieve during the month, however. It lost -5% on a year-over-year basis, remaining at -5.9% on a year-to-date basis.

Keeping with the trend present in the first half of the year, Africa joined North America as one of two regions for which freight growth remained positive in July. Year-over-year gains reached +4.9% in the region, with year-to-date standing at +2.2%. The region has been quite volatile in the last twelve months, with robust gains followed by declines. 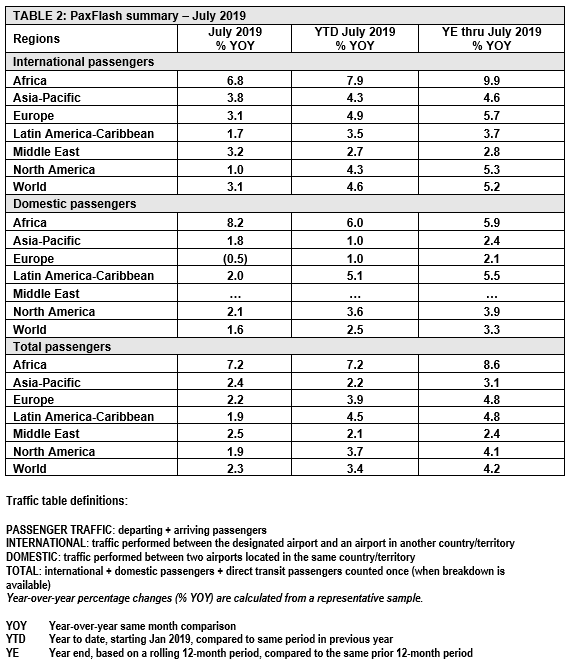 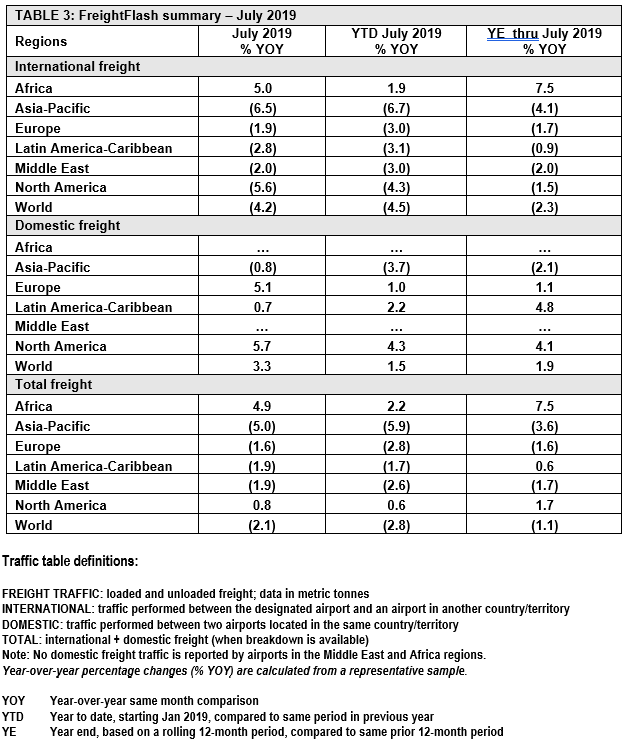