The global passenger market gained +3.1% in May, up from +2.9% in April, with a year-to-date growth figure of +3.6%. International traffic was the major contributor to this growth, but domestic passenger growth was also up against the previous year.

“Global passenger traffic has continued to grow with data for May showing an upswing in growth as compared to April,” ACI World Director General Angela Gittens said. “The global economy entered a period of slowdown during this time, however, which contributed to the continued weakening in the air freight industry.

“With economic tensions between Japan and South Korea flaring, and the United States standing firm on its protectionist trade practices, the air transport industry continues to face a challenging year.”

ACI collects and analyses data from a significant sample of airports that provide regular reports on month-by-month passenger and freight statistics; this forms part of the world’s most comprehensive source for airport data.

After a slower month in April (+0.6%), the domestic passenger market gained +2.7% in May on a year-over-year basis. Year-to-date growth rose to +2.9% for the segment. The international market grew +3.6% during the month, reaching +4.6% on a year-to-date basis.

North America’s passenger market grew +4.3% during the month, reaching +4.1% on a year-to-date basis. Both passenger segments in the region have been relatively robust, with international passenger traffic growing by +5.2% and domestic traffic gaining +3.9% for the first five months of the year.

Europe grew +3.1% in May, down from +4.8% in April. The region’s year-to-date result was equal to North America’s figures by the month’s end, at +4.1%. The impact of the international passenger market was significant for the region, growing at +5.2% versus +1.3% for the domestic segment on a year-to-date basis.

Asia-Pacific’s passenger market recovered in May, posting +1.8% after declining by -1% in April. The region’s year-to-date growth rate stood at +2.3%, the lowest of the three major regional markets. The slowdown was mostly driven by an ailing domestic market. After declining by -3.9% in April, it recovered enough to gain +0.6% in May. The segment’s year-to-date growth was +1.3% by the month’s end, three percentage points below its international market.

The Latin America-Caribbean region posted the highest year-over-year growth in May, at +6%. The region’s passenger market, along with Africa’s, has mostly been resisting the slowdown observed in the four other regions since the start of the year. Its year-to-date results stood at +5.6%. Africa’s recent success suffered a sudden shift during the month, its year-over-year growth falling to +0.8% after an +8% increase in April. Year-to-date growth remained robust, however, at +6.1%. The Middle East declined by -0.1% on a year-over-year basis in May, down more than three percentage points from April’s +3.3%. Its year-to-date stood at +1.6%, the lowest of all regions.

The international freight market continued to decline in May, losing -5.1% on a year-over-year basis. Year-to-date results reached -4.7% by the month’s end, down from -4.4% in April. The domestic market remained in the positive, with a +2.4% gain in May and growth of +1.8% since the start of the year.

North America was the only regional market posting positive growth during the month, gaining +0.4% on the strength of its domestic market, which grew by +4.4% on a year-over-year basis. Despite this apparent resilience to the early stages of a global slowdown, the region’s year-to-date freight market was only up +0.7% after five months of the year.

Latin America-Caribbean and Africa were down -2.4% and -2.9% respectively on a year-over-year basis in May. The Middle East was down -4%. Unlike most of its regional peers, Africa’s year-to-date results remained positive by the month’s end, at +1.7%, but was still trending down significantly since the start of the year. Latin America-Caribbean and the Middle East stood at -1.1% and -1.8% respectively. 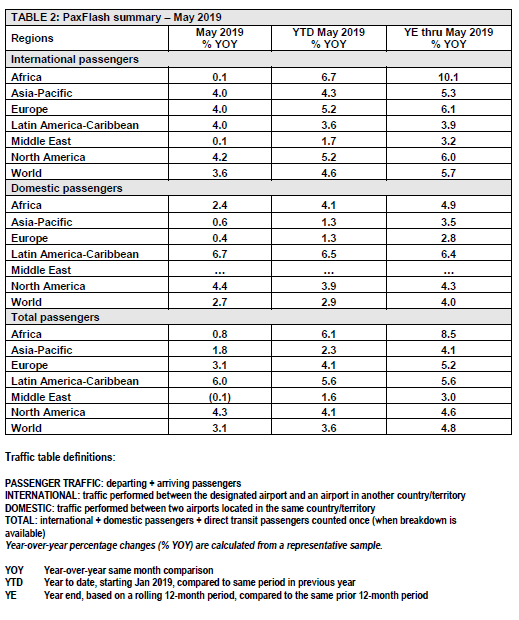 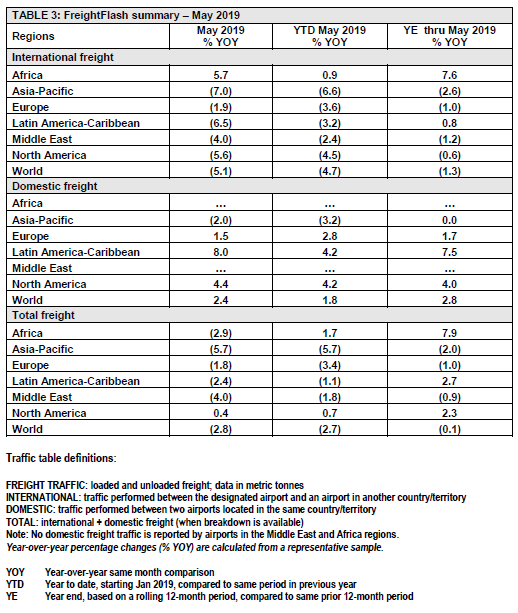