The global air freight market – which almost returned a positive growth result in March – fell again in April with a decline of -3.6%. The year-to-date result for the industry now stands at -2.6%.

On the other hand, global passenger figures remained positive in April, growing by +2.9% on a year-over-year basis. Year-to-date growth now stands at +3.5%.

“With trade conflicts between the United States and its major partners remaining unresolved, and geopolitical tensions in the Middle East flaring up again, the indications are that 2019 could be a difficult year for the air freight market,” ACI World Director General Angela Gittens said. “The global backdrop remains weak for both emerging and advanced economies and it remains uncertain whether trade tensions can be resolved and whether key macroeconomic indicators such as consumption and direct investment will regain momentum before the end of the year.

ACI collects and analyses data from a significant sample of airports that provide regular reports on month-by-month passenger and freight statistics; this forms part of the world’s most comprehensive source for airport data.

Of the major markets, Europe gained the most during the month, with a +4.8% increase in total passenger volume. This increase was driven by the region’s international segment, which gained +6.7% against a decline of -0.9% for its domestic counterpart. The region stood at +4.6% on a year-to-date basis.

North America also performed comparatively strongly given the global backdrop of uncertainty, gaining +3.5% in April, and standing at +3.9% on a year-to-date basis. The region’s international market gained +7% during the month for a gain of +5.6% for the first four months of the year.

While the Asia-Pacific year-to-date growth result is positive at +1.8%, total passenger volume fell -1% in April. The region’s domestic segment drove much of this decline, losing -3.9% against April 2018. Given the usual strength of the region’s air transport market, this represents a major shift. The slowdown has been particularly pronounced since the start of the year and has affected most major markets in the region. China’s domestic market has remained relatively resilient to this trend until now. The country’s economy has slowed down and indications are that this regional trend may continue throughout the year.

Africa, benefiting from several tailwinds, such as the recovery of tourism in North Africa, rising oil prices and the launch of the Single African Air Transport Market, performed well in April, bringing its year-to-date growth rate to +7.4%. The region, once subject to significant volatility, has grown consistently above 6% in the last 7 months. Latin America-Caribbean followed a similar trend, growing by +5.4% since the start of the year.

The Middle East trailed behind, with a gain of +1.2% for the period. This was still an improvement over March figures, however, when the region had been the only passenger market to post figures in the negative (-0.3%).

After temporarily recovering some ground in March by slowing its decline, international freight once again posted a significant loss in April, losing -6.6% on a year-over-year basis. The year-to-date figure stands at -4.4%, more than one percentage point below its result for the first quarter of 2019. Continuing the general trend for the last months, domestic freight – mostly driven by activity in North America – remained positive, at +3.8% for April and at +1.5% on a year-to-date basis.

Of the major regional markets, only North America posted growth in April, gaining +1.4% and standing at +0.7% on a year-to-date basis. The region’s international freight was still down for 2019, however, at -4.2% for the four first months of the year.

Freight volume in Africa, which has been the most consistent source of freight growth in 2019, grew +6.8% during the month. Though its year-to-date figure of +3.6% remains moderate, it still stands more than 6 percentage points above the global industry’s year-to-date growth rate of +2.6%. 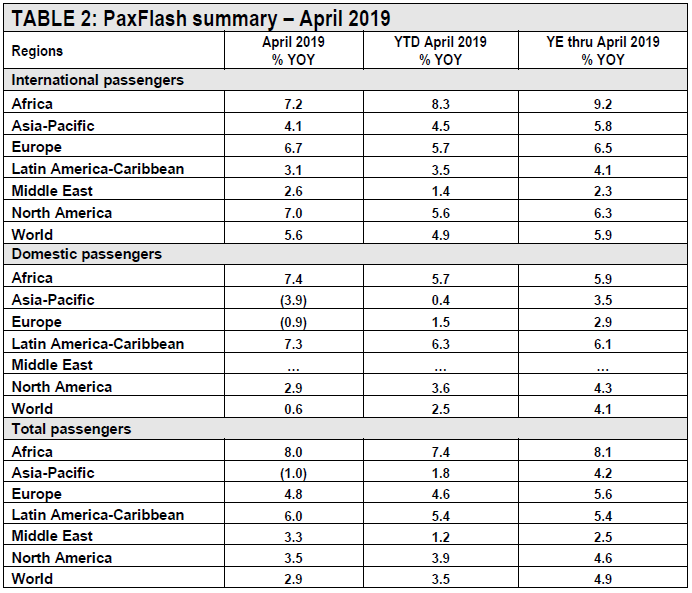 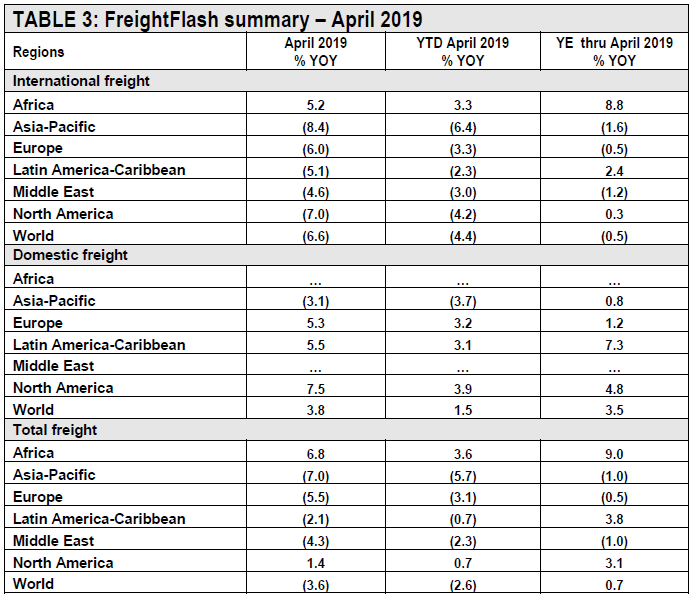