Montreal, 24 May 2019 – Airports Council International (ACI) World has today revealed that the air freight industry continued to decline in March, losing 1% on a year-over-year basis and finishing the first quarter of 2019 with a 2.1% decline in volumes.

While the passenger market continued to post positive figures in March, ending the quarter with 4.1% growth at the global level, this was below the industry’s +5.3% 12-month rolling average.

“A sudden reignition of the trade war between the United States and China, as well as increasing tensions with Iran, are starting to put significant pressure on the air freight industry which is already affected by the volatility in the global economy,” ACI World Director General Angela Gittens said.

“Passenger traffic has remained comparatively resilient but the slight moderation in growth has continued since it emerged in mid-2018.”

The international passenger market experienced a slowdown in traffic in March, growing by 3.9% on a year-over-year basis, compared to 4.8% in February. End-of-quarter growth stood at 4.8%. The domestic market gained some momentum, rising by 3.4% compared to 3.1% last month. Its Q1 2019 growth rate remained below the international segment, at 3.7%.

North America grew by 4.6% in March, ending the quarter with 4.1% gain on a year-to-date basis. Both domestic and international markets fared well during the period, posting 4.4% and 4.6% respectively.

Europe was close behind with 4% on a year-over-year basis, though its Q1 result was higher, at 4.5%. The region’s international passenger market slowed down compared to February, posting 4.4% in March against 5.9% for the month prior. The segment’s Q1 results were more than twice that of the domestic segment, at 5.3% versus 2.5%.

Asia-Pacific, which has been the largest engine of growth for the industry in recent years, is showing the effects of global headwinds. The region grew 2% in March, with end-of-quarter results reaching 3.4% on a year-to-date basis. The international passenger market propped up those results in March, at 3.4%, while the domestic market only gained 1.3%.

The Middle East was the only region without growth in March, declining by 0.3%, but Q1 results remained above zero, with a 1.1% gain over the period. A continuation of ongoing geopolitical trends – the Qatari diplomatic crisis and tensions between major regional players and some Western nations – is having an impact on the region’s traffic.

In March, international freight regained some of its momentum from its 6.7% decline in February, only falling 1.3%. Q1 2019 results for the segment remained in the negative, at -3.2% against 2018. Domestic freight fared better, standing at 0.1% for the quarter due to the strength of the North American market (+0.5%).

Of the major regional markets, only Europe posted growth in March, gaining 0.4%. End-of-quarter growth remained in the negative, at -1.5%, driven down by falling international freight.

North America barely entered a decline in March, losing 0.1% against last year. Q1 results remained positive, at 0.8% despite losses (-1.8% for the period) in international freight.

Asia-Pacific’s air transport sector has been under pressure from the ongoing trade war with the United States and resulting disruptions in a number of industries’ supply chains. Air freight declined 3.3% in March, and Q1 2019 results stood at -5.5%. Both domestic and international freight posted similarly negative figures in the region.

Latin America-Caribbean freight traffic also declined in March, by 1.5%. The region’s end-of-quarter result was -0.9%. Africa and the Middle East were the only regions with  freight growth in March, gaining 1.5% and 2.1% respectively. 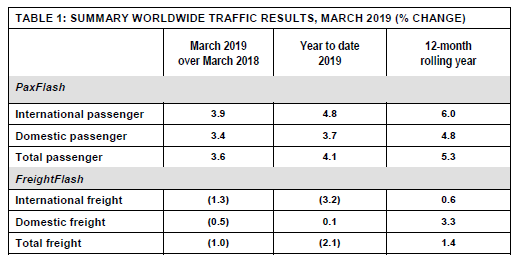 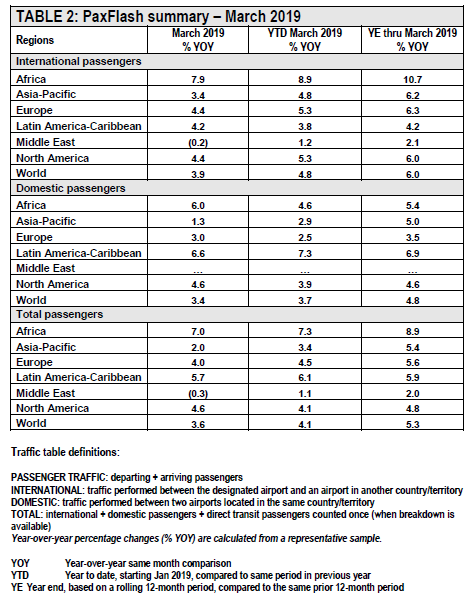 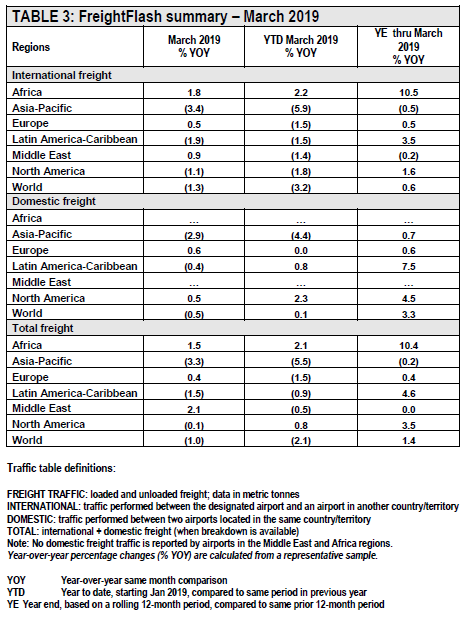