Following a weaker result in December in which industry volumes fell 1.5%, the air freight market inched down by 0.1% in January.

“Global passenger traffic growth remained robust in January but below the 12-months rolling average for the industry of 5.8%,” ACI World Director General Angela Gittens said. “Global air freight continued to decline, but at a slower rate and this needs to be seen in the context of last year’s growth and the current market conditions.

“Twelve months ago, the air freight industry grew 8% which was a particularly successful month, and this set a higher benchmark for January this year. Given the increased use of tariffs, continuing tensions, and resulting supply chain shocks, air freight volumes have shown some resilience in that they did not fall further.”

International passenger volume remained a stronger growth driver than domestic passenger volume, at 6.7% and 5.2% respectively. After lagging slightly behind other major regional markets in the latter half of 2018, Asia-Pacific grew the most in January, posting 5.6% growth. As with 2018, the Lunar New Year fell in February this year, with limited impact on the first month of the year as a result. The 12-month rolling average for the region stood at 6.6%, with both international (7.3%) and domestic (6.2%) segments performing strongly.

North America and Europe posted similar figures in January, at 4.5% and 4.2% respectively. Both regions had higher growth in international passengers than domestic (6.1% versus 5.6%), with Europe’s domestic market recording +0.9% growth but falling behind its international segment significantly.

Africa and Latin America posted moderating figures in January. Africa was driven by its international market and gained 5.9% during the month, with a 12-month rolling average standing at 10.1%. Latin America’s results were driven by its domestic market and reached 5.3% in January, more in line with its 5.7% figure for the last twelve months.

The Middle East continued its subdued gains due to regional tensions, growing by 1.7% against a 2.2% 12-month rolling average.

Domestic freight recovered from its slowdown in January, gaining 4.7% year-over-year and leaving its 12-month rolling average at 4.2%. The industry’s international segment declined even more during the period, however, posting -2.2% compared to -1.7% in December. The two trends countervailed each other resulting in the air freight market inching down by 0.1% in January.

All other regions posted declines in total freight. Asia-Pacific declined 1.7% against January 2018, while Europe declined 2.2%. The two regions’ 12-month rolling averages stood at 1.3% and 1.2% respectively, by the month’s end, with Asia-Pacific’s domestic freight (3.2%) propping up the region’s overall results slightly.

Africa suffered significant volatility but remained in positive territory for the last twelve months; it declined by 1.2% in January. Along with Latin America-Caribbean (7%), Africa maintained a strong 12-month rolling average at 11.4%. The Middle East declined 1.8% during the month on a year-over-year basis, and was the only region with a combined growth of less than 1% in the last twelve months. By January’s end, its 12-months rolling average stood at 0%. 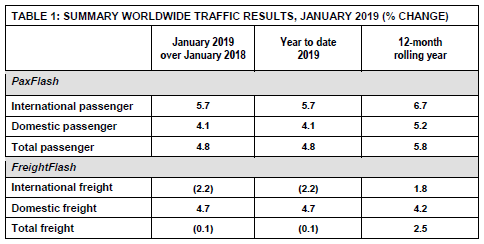 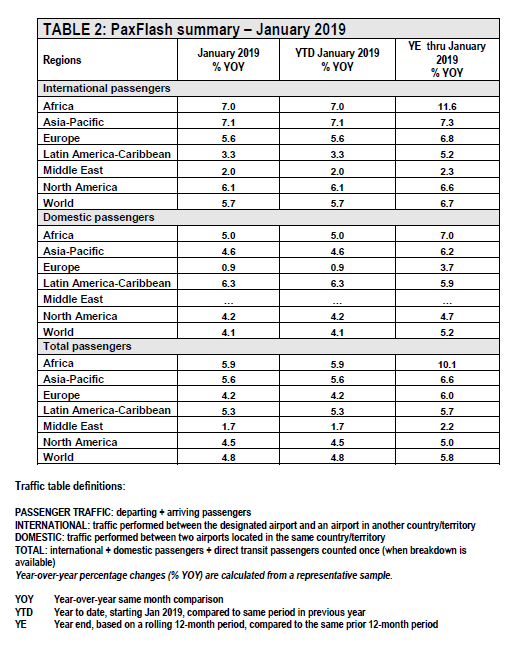 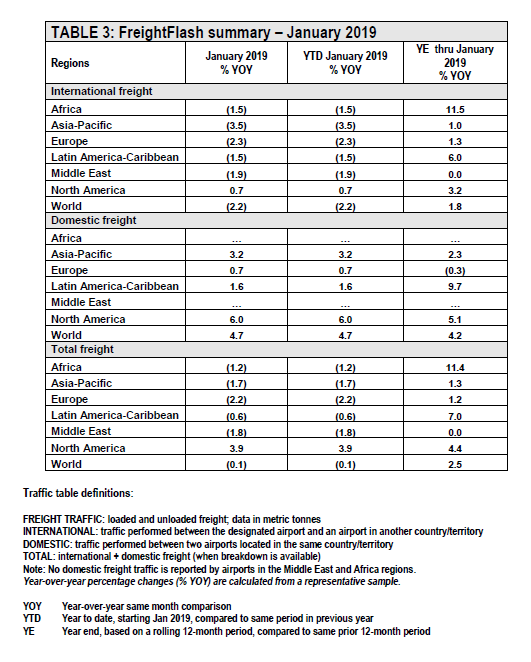