Global passenger traffic grew by 4.8% but this year-over-year figure was below the preliminary year-end result of 5.9%, continuing a moderation trend started in the latter half of 2018.

In the global air freight market, global year-over-year volumes fell 1.5% when compared to December 2017 which meant the year-end growth figure for 2018 was 3.3%.

“While global passenger traffic growth has moderated and is not of the same magnitude as in 2017, it has remained fairly robust overall for most of 2018,” ACI World Director General Angela Gittens said. “The decline in freight need also to be examined in the context of the increasing geopolitical instability and ongoing protectionism that has affected global traffic and trade.

“Industry performance in 2019 remains very uncertain as trade wars persist, the United Kingdom continues to work to exit the European Union, and relationships in key markets in the Middle East and China threaten to cast a pall on the global outlook.”

The international passenger market continued to outperform its domestic counterpart in December, posting 6.3% growth on a year-over-year basis. The domestic segment showed higher volatility, with 3.8% in year-over-year growth.

In the major regional markets, Europe’s success continued, posting 6.3% growth for the month. As with the global industry, the region’s growth was mainly fueled by the strength of its international segment, which grew 7.6% in December. Its domestic market stood at more moderate levels, with 3.1%. North America and Asia-Pacific posted comparable growth rates, at 3.9% and 3.8% respectively on a year-over-year basis. Here again, international passengers fueled the major part of industry growth in both regions.

Africa posted the highest growth rate of all regions in December, with 9.8%. Latin America-Caribbean followed with a 6.3% increase, the only region having benefited from an upsurge during the month. The Middle East, still experiencing the effects of multiple geopolitical challenges, grew by 2% in December.

Nearly all regions posted declines in freight volumes in December, bringing year-over-year growth to -1.5% during the month. Here again, Africa bucked the trend, growing by 18.7% for the period. No segment posted robust results, with the international market losing 1.7% and the domestic market 1%.

In line with the importance of domestic freight in its market, North America weathered the storm better than Europe and Asia-Pacific. The former declined by 1.2% in December, against losses of 2.5% for the two other regions.

Latin America-Caribbean and the Middle East declined by 0.8% and 0.9% respectively. Though this marked a continuation of a challenging trend for the Middle East in 2018, it was a major shift for the former. 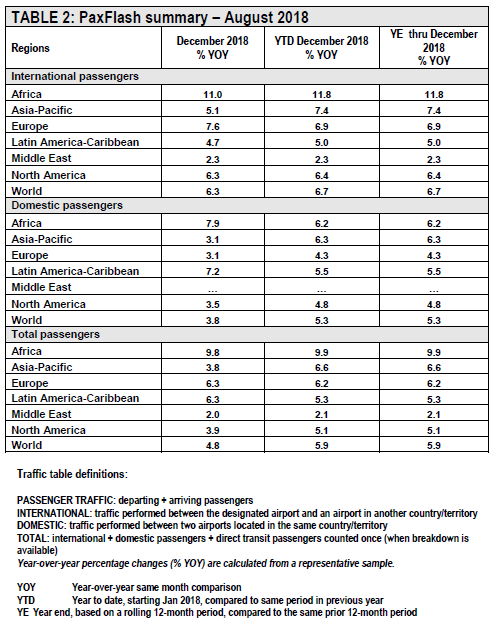 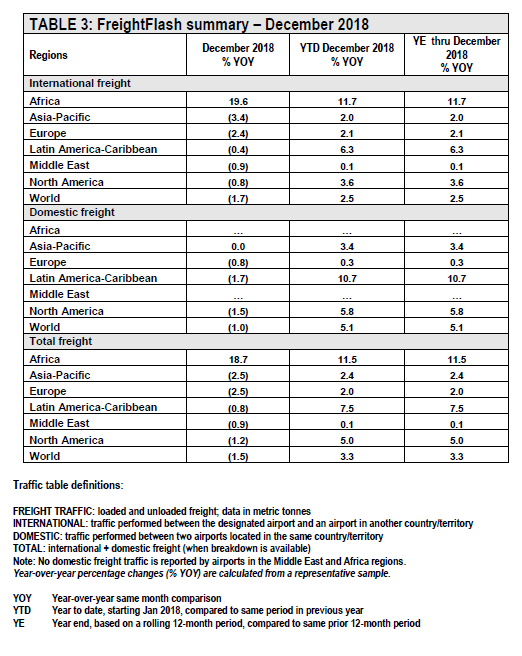 1. Airports Council International (ACI), the trade association of the world’s airports, was founded in 1991 with the objective of fostering cooperation among its member airports and other partners in world aviation, including the International Civil Aviation Organization, the International Air Transport Association and the Civil Air Navigation Services Organization. In representing the best interests of airports during key phases of policy development, ACI makes a significant contribution toward ensuring a global air transport system that is safe, secure, efficient and environmentally sustainable. As of January 2019, ACI serves 646 members, operating 1,960 airports in 176 countries.