Montreal, 23 January 2019 – Airports Council International (ACI) Word found that, despite small monthly fluctuations, the general passenger traffic growth trend between August and November in 2018 was quite stable, hovering between 5% and 5.5%. ACI recorded a 5.0% increase in global passenger traffic in November as the year drew towards its conclusion.

Air freight volumes showed significant volatility during the period August to November with year-over-year figures ranging from 3.7% in October to -0.3% in November. The gains produced by the industry in the first half of 2018 have been moderating since, with year-to-date growth reaching 3.6% in November.

“Following the strong results in 2017 during which passenger growth was recorded at 7.5%, it looks as if the industry will record similarly robust but moderating results in 2018,” said Angela Gittens, Director General of ACI World. “By the end of November, the year-to-date result for passenger traffic was recorded at 6%. As regards freight, volatility in the market between August and November shows that the trade war between the world’s two largest economies has certainly tested the industry this year and the final impact on global supply chains remaining uncertain.

“The outlook for the industry’s performance this year remains uncertain. The United States’ federal government is suffering from a partial shutdown, China’s diplomatic relationships are under tension with several major Western countries, the United Kingdom’s withdrawal from the European Union is still being negotiated, and geopolitical tensions are high in the Middle East, with the Qatar crisis remaining unresolved, all of which could have a significant impact on passenger and traffic growth in 2019.”

In August, passenger traffic grew by 5.4% on a year-over-year basis. Both domestic and international segments performed comparably, at 5.2% and 5.6% respectively. Although regional heterogeneity was present, with figures ranging from 3.7% (for Latin America-Caribbean) to 7% (for Africa), most regions performed well during the period, standing close to the global industry figure.

The trend in September remained similar to August’s, although the Middle East under-performed slightly, posting a 1.6% growth figure for its total passenger traffic compared to the global industry’s 5.1%. Both international and domestic segments of the industry produced comparable results, with 5.5% and 4.8% respectively on a year-over-year basis. The month marked a moderation in Asia-Pacific’s results, its passenger traffic gaining 3.4% versus 6.5% in August.

The international market gained over the domestic market in October, with the global industry posting 6.6% and 4.6% for the two segments on a year-over-year basis. Total industry growth reached 5.5% during the month. Europe performed particularly well compared to the two other major regional markets, posting 6.8% in total traffic growth, at least 2 percentage points above Asia-Pacific (4.8%) and North America (3.6%).

November’s global passenger traffic trend saw a continuation of October’s shift in favor of the international market; it grew by 6.8% on a year-over-year basis, compared to 3.9% for the domestic market. The global result was in line with prior months, gaining 5%.

Year-to-date figures were closer for the two segments, with the international market having grown 6.7% over the year, compared to 5.4% for the domestic market. Nearly all regions had robust year-to-date growth rates, with only the Middle East (2.1%) hovering below 5%. Asia-Pacific, despite showing a moderation in growth rates in the last four months, stood at 6.8% (from 8% in August). Europe and North America’s year-to-date have been remarkably stable for the last months, at 6.2% and 5.1% respectively by November’s end.

August freight figures were held up mostly by the domestic segment, which grew at 5% on a year-over-year basis compared to the international segment’s 1.2%. Total freight gained 2.3% during the month. The divergent growth between Asia-Pacific and North American markets, which had started to show in June of this year, continued during the month, with the two regions growing by 1.9% and 5.1% respectively on a year-over-year basis. Europe barely avoided going into negative territory in August, posting 0.1% growth for the month.

September’s freight results showed a substantial moderation, reaching 1.6% growth on a year-over-year basis, in line with the volatility that’s characterized this year’s freight market. Asia-Pacific lost 1.1% during the month, with Europe gaining 0.8% and North America continuing its robust growth at 4%. Here again, global domestic freight propped up the industry’s figures with +3%, compensating for a 0.9% increase in the international segment.

The air freight market gained back some lost momentum in October, growing by 3.7% on a year-over-year basis. As with August and September, Asia-Pacific (2.6%) and Europe (1.9%) under-performed compared to North America (6.4%) during the month. The global industry’s domestic segment contributed the larger portion of the period’s increase, gaining 6.6%. The international segment reached 2.4%, an improvement over the four prior months.

In November 2018, the global air freight industry posted a decline for the first time since February 2016, losing 0.3% against a year prior. Both market segments had weak performance, with international freight losing 0.6% and the domestic segment gaining 0.3%. North America posted a 0.9% increase in total freight during the period, a significant shift from prior months for the region. Europe and Asia-Pacific declined on a year-over-year basis, posting -1% and -2.1% respectively.

Despite the volatility and moderation of the last months, year-to-date figures remain robust for the air freight industry. Total freight is set to grow by at least 3% by year’s end (currently at 3.6%), with domestic freight hovering around 5%. International freight is standing at 3%, with the trend suggesting it could stand around 2.7% by year’s end. Considering the events taking place in 2018, these figures do point to the industry’s impressive resilience to shocks.

1. Airports Council International (ACI), the trade association of the world’s airports, was founded in 1991 with the objective of fostering cooperation among its member airports and other partners in world aviation, including the International Civil Aviation Organization, the International Air Transport Association and the Civil Air Navigation Services Organization. In representing the best interests of airports during key phases of policy development, ACI makes a significant contribution toward ensuring a global air transport system that is safe, secure, efficient and environmentally sustainable. As of January 2019, ACI serves 646 members, operating 1,960 airports in 176 countries. 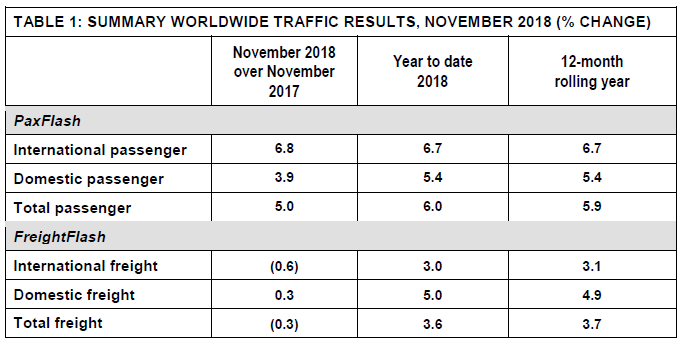 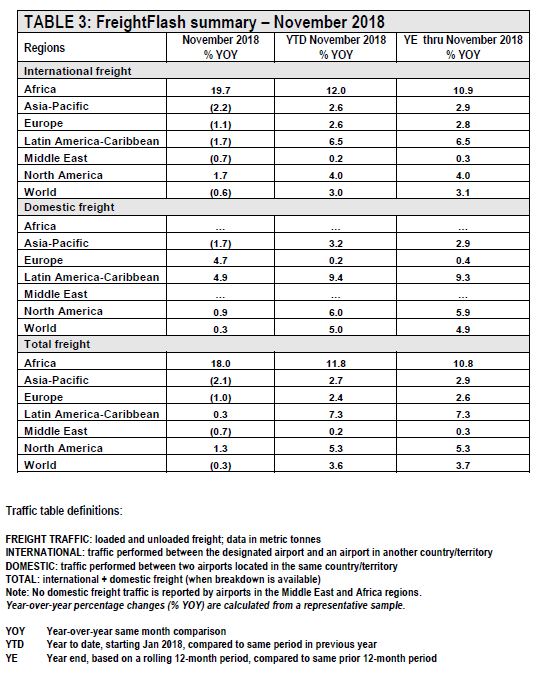