Niclas Svenningsen, who heads the Climate Neutral Now initiative at the United Nations Framework Convention on Climate Change (UNFCCC) Secretariat in Bonn, Germany commented “Following the conclusions of the IPCC Special Report and COP24, the need to address the escalating threat of Climate change is ever more urgent – that means all hands on deck. This isn’t a time for cynicism – it is a time for raising awareness and driving collaborative action. The airport industry’s work through the Airport Carbon Accreditation programme is an example of global private sector engagement in climate action – now with 259 airports on board. 167 of those are actively reducing their emissions, 102 of them have also engaged others on the airport site to get involved and 49 are running carbon neutral airport operations. I invite people to find out more about their local airport’s involvement and ambitions – mobility is a fundamental part of life, so let’s try to make it as efficient & ecological as possible.”

The latest airport operator to become carbon neutral is Aeroporto di Napoli in Italy. After gradually making its way through the different levels of Airport Carbon Accreditation, demonstrating the CO2 reduction it has made on-site and the engagement of aviation partners, it has invested in Gold Standard offsets to address its remaining residual emissions.

Armando Brunini, CEO of Aeroporto di Napoli said “Running an airport is a complex business – there are lots of stakeholders and many collaborations and partnerships that need to be fostered and maintained, if real efficiency gains are to be achieved. Our journey to this moment – from initially mapping our carbon emission sources, to reducing our emissions, engaging other companies on the airport site to get involved and now becoming carbon neutral – have benefited from the framework, guidance and rigour of the Airport Carbon Accreditation programme. We in the airport business compete with each other on so many fronts: attracting airlines to set up new routes, attracting passengers, being the first to embrace the latest innovation and more. With Climate change now an urgent priority, it’s only fitting that we should seek to exceed expectations on this too – as a way of motivating even more climate action within the airport industry and the wider air transport sector.”

Airports recently successfully moved up to Level 2 ‘Reduction’ include Noumea la Tontouta (New Caledonia), Salahah Airport (Oman) as well as Dinard Bretagne and Rennes Bretagne (France) as these airports progressed from moving mapping their carbon emissions, to actively reducing them.

In the Americas Kelowna International Airport, Pisco Airport and Salvador Bahia International all became accredited for the first time at Level 1 Mapping.

To reduce their carbon emissions, airport operators need to consider the full extent of the emissions sources under their direct control. Investment in more energy efficient lighting, heating, switching to hybrid or electric ground vehicles, onsite renewables, energy management tools and employee behavioural change all have a part to play. The possibilities become even more diverse when airport operators engage other stakeholders on the airport site as well (Level 3 of the programme), with initiatives such as Airport-Collaborative Decision-Making (A-CDM), Continuous Descent Operations and Time-Based Separation lowering airline-associated carbon emissions and better intermodal access and electric or hybrid taxis offering passengers cleaner transport solutions to/from the airport.

Carbon neutral airports at Level 3+ of the programme have to provide evidence of undertaking all the actions required by the programme (mapping their emisisons, reducing them and engaging others on the airport site), before investing in responsible carbon offsets. The 44 carbon neutral airports during Year 9 of the programme (May 2017 to May 2018) offset 672,000 tonnes of CO2 in residual emissions. To help airport operators select high quality offsets, a dedicated guidance document on offsetting has just been released by the Airport Carbon Accreditation programme. 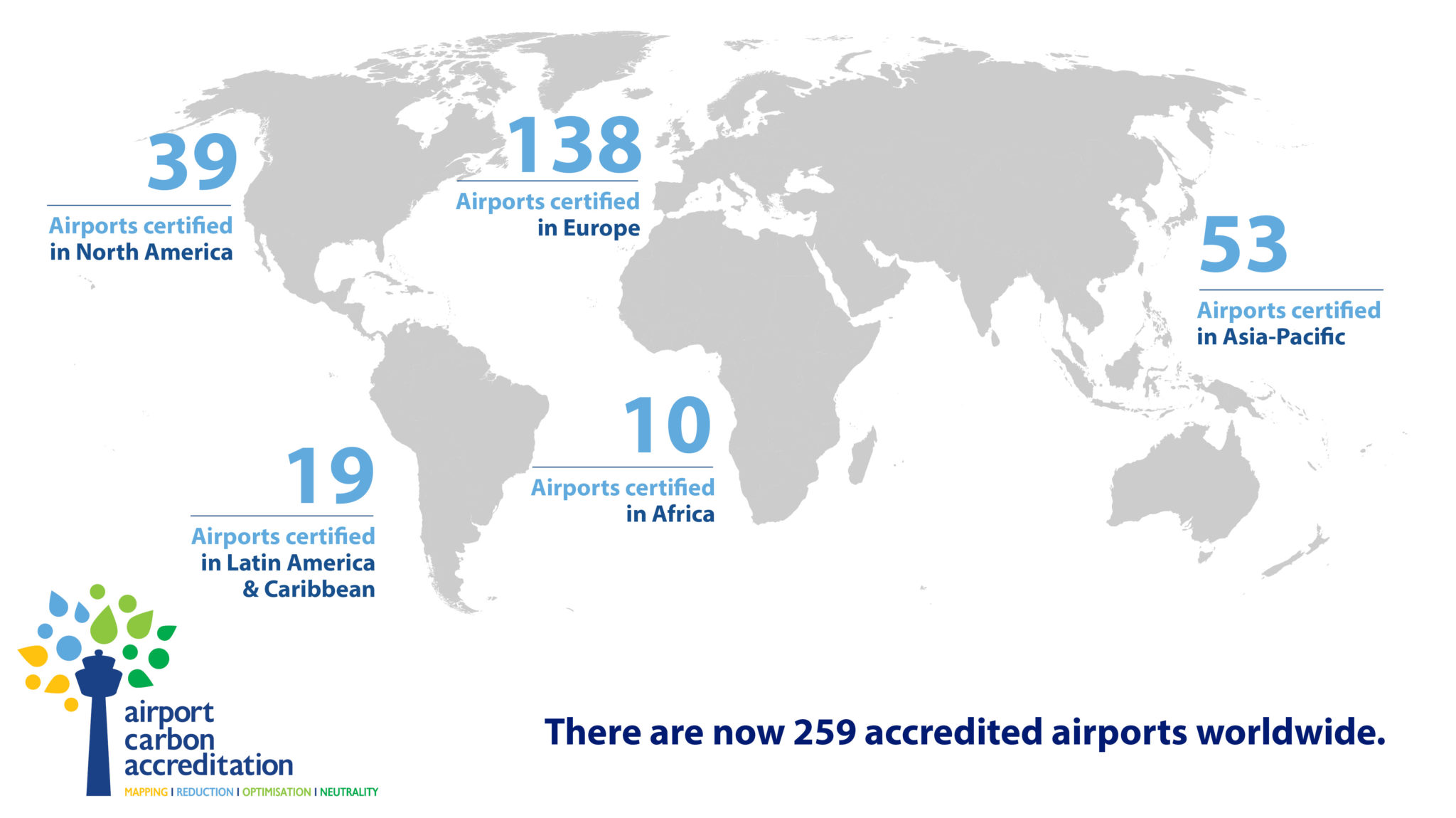 Full details of Year 9 (May 2017 to May 2018) are available in the Annual Report available to download.

¹The programme is administered by leading consultancy WSP. It accredits the airports under the programme, provides administrative and secretariat services and advises applicant airports through the accreditation process.

WSP is one of the world’s leading engineering professional services firms. WSP are technical experts and strategic advisors, and provide services to transform the built environment and restore the natural one, in areas including environmental and climate remediation, urban and transport planning, sustainable transport networks and strategies, airport sustainability, carbon management and energy planning and management.

Find out which airports are certified and their level of certification.