Montreal, 21 November 2018 – Data analysed and published by Airports Council International (ACI) World has found a 5.4% increase in global passenger traffic on a year-on-year basis in July.

Year-to-date growth for the industry’s passenger market reached 6.4% during the period, down from 6.6% in June, following a slight moderation trend which started at the end of the first quarter of the year.

Freight volumes benefitted from a small uptrend in July, growing by 3.2% compared to June’s 2.3%. Year-to-date figure growth for the global industry reached 4.5% during the period, from 4.8% at the end of the second quarter of this year.

“The global aviation industry achieved particularly strong results in 2017.  Although 2018 figures up to July remain robust, achieving similar results may prove difficult this year”, said Angela Gittens, Director General, ACI World. “Furthermore, it is clear that trade tensions around the world are starting to take their toll on global exports.

“International passenger traffic, which had been benefitting from a significant upsurge since the start of the year, slowed down in July. This brought the segment’s growth rate closer to the results posted by the domestic market. .”

Passenger traffic grew at a robust rate, with the international market reaching 5.8% and its domestic counterpart reaching 5.1%. Year-to-date figures stood at 7% and 5.8% respectively by July’s end.

The major markets of Asia-Pacific, Europe and North America all posted comparable figures for total passenger traffic during the period, increasing by 5.9%, 5.1% and 5% respectively. Despite the close results for July, Asia-Pacific maintained its lead against the two other regions on a year-to-date basis, reaching 8.2%, against 6.4% for Europe and 5.2% for North America.

North America’s performance remained robust given its mature market status. The region’s slight slow-down was driven almost entirely by its international passenger market, which dropped from a 7.3% growth figure in June to 4% in July.

The Middle East’s passenger market, seemingly heading for an annual decline up to June, has been picking up speed since then. The region posted a 6.9% increase in July, after a surprisingly high 8.5% one month prior. The two strong months boosted its year-to-date growth to 1.7% by the end of the month, from -0.8% in May.

Finally, Latin America’s momentum recovered in July with growth of 4.8% on a year-over-year basis, after posting a fairly slow month of June (having posted 2.7%). Faced with a cycle of macroeconomic shocks in large economies such as Brazil and Argentina, the region has been growing at a particularly middling rate in the last two years.

Global air freight trends seemed to be tracking the evolving trade context around the United States in July, with international freight continuing its slow-down to 3.9% growth on a year-to-date basis, from 4.4% in June. At the same time, domestic freight performed relatively well during the period, gaining 7% on a year-over-year basis and boosting its year-to-date figure to 5.8%. This partially balanced the slow-down in international trade, but in the long-run could not fully offset the economic impacts of a declining international freight market, which represents roughly twice the size of the domestic segment.

Of the three major regional markets, North America’s total freight volumes fared the best in July (4.1%), followed by Europe (2.9%) and Asia-Pacific (2.5%). Year-to-date figures for all three markets have been slowly but steadily decreasing since Q1. North America stood at 5.4% at the end of the period, with Asia-Pacific reaching 4.1% and Europe 3.5%.

After a sharp drop to 1.7% growth in June, North America posted a 4.1% increase in July. As could be expected given the current state of international trade relations, the entire upswing was driven by growth in domestic freight, which increased by 7.7% during the month on a year-over-year basis. International freight, on the other hand, declined by 1%.

Turkey’s recovering market (+12.9%) and Belgium’s burgeoning cargo industry (+14.6%) remained the main drivers of Europe’s growth in July, while other major markets sustained subdued or even negative growth on a year-to-date basis.

Latin America performed relatively well in July, increasing 4.6% on a year-over-year basis, only behind Africa for the period. As with the latter, the air freight market seems on track to post substantial gains in 2018, with year-to-date reaching 9.7%.

Africa’s freight figures slowed down in July, after benefiting from a surge of close to 18% in June. The region posted 6.2% growth during the period, with year-to-date figures remaining above double-digits at 11.6%.

In line with its passenger traffic, the Middle East’s freight market rebounded in July, after posting a decline of 1.2% in June. Year-over-year growth reached 3.2%, keeping the region’s year-to-date figure above the zero percent mark, at 0.7%. It had reached 0.2% in June. As has been the case since the start of the year, the region’s outlook remained uncertain by the end of July. 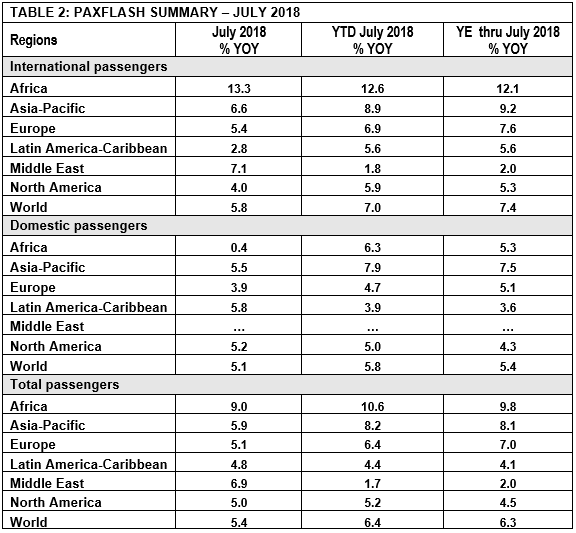 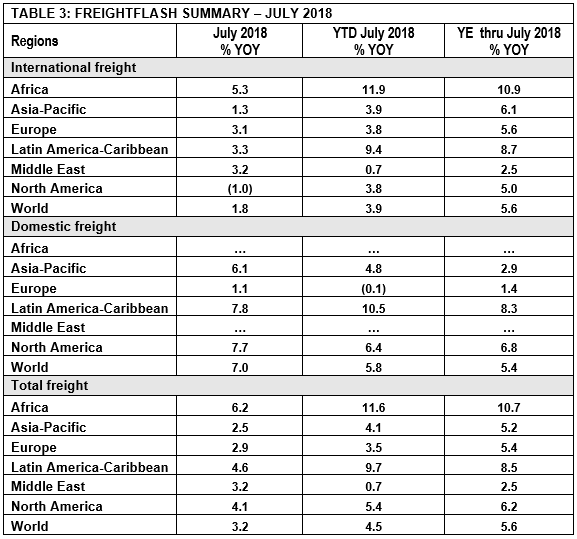