While this was close to one percentage point below its year-to-date growth figure, it remains a robust demonstration of resilience considering the global climate of increasing geopolitical tension.

ACI’s month-by-month passenger and freight statistics are based on a significant sample of airports that provide regular reports and form part of the world’s most comprehensive source for airport data.

Freight volumes picked up speed during the month despite comparing to a particularly favourable May 2017, reaching +5.1% year-over-year, close to their +5.3% year-to-date figures. Outlook for global air freight is currently mixed, with trade tensions and inflation up in May, but freight demand remaining robust in the near term.

“The air transport sector has shown remarkable resilience to the tense climate that has descended over international relations and trade,” said Angela Gittens, Director General, ACI World. “Tensions include the ongoing Qatari blockade and the political challenges facing major Western powers including Brexit negotiations in Europe, and the shifting approach to international relations in the United States.

“The link between aviation and global macroeconomic conditions, however, remains strong, so a prolonged period of diplomatic and market instability could dampen the industry’s outlook for the near future.”

All three major regional markets grew at a similar pace in May, with Asia-Pacific growing by 6.3%, Europe by 6.2% and North America by 5.6%. Asia-Pacific’s year-to-date numbers reached 8.2% during the period, a slight slowdown from its frequent double-digit growth in 2017. The region’s two passenger markets have been growing significantly, with international passengers reaching +9.0% in May on a year-to-date basis, 1.1 percentage point above domestic passengers. The region’s passenger traffic figures showed higher disparity this month, with India, China and South Korea posting +13.3%, +8.3% and +8.1% respectively, while Australia and Japan posted more subdued figures of +2.8% and +2.3% respectively.

In Europe, growth was almost entirely driven by the international segment, which reached +7.6% on a year-over-year basis, compared to its domestic segment’s +2%. The region’s year-to-date growth figure has been trending downwards very slightly in recent months after a particularly strong year 2017 and stood at +6.7% at the end of May. A number of advanced but more peripheral economies grew by double digit figures during the period, with Iceland posting an impressive +26.5%, followed by Greece (+18.9%), Hungary (+13.5%), and Finland (+11.2%). Ireland was close behind, posting 9.8%, nearly double the country’s year-to-date growth rate. The Russian Federation and Turkey, still on a recovery path, grew by 9.4% and 8.0% respectively. The positive pull of the European periphery may be one of the developing trends in 2018.

North America followed with +5.6%, up from its 5.1% year-to-date and +4.2% 12-months rolling average. Although this could suggest a rising trend line, current macroeconomic outlook for the United States remains mixed for the second half of the year, with the national-level effects of the recent tax cuts having run much of their course, and trade pressure crystallizing its impact on a growing number of industries and the jobs they support.

Out of the six ACI regions, Africa posted the highest growth rate for the period, with +7.9% on a year over year basis. The region has been growing at a robust rate in the last 7 months, with major economies such as Nigeria and Egypt, recovering from macroeconomic shocks, which stood at 28.8% and 20.5% respectively on a year-to-date basis. The region’s success is distributed unequally, however; while Nigeria and Egypt are posting recovery-boosted figures, Morocco and Algeria both declined in May, with -2.3% and -7.6% respectively on a year-over-year basis.

Latin America-Caribbean grew at a more moderate 4.1% in May, up from its year-over-year growth of 3.0% in April. The region’s international segment pulled the general growth figure upward, standing at 5.7% on a year-over-year basis. The region’s passenger market, like Africa’s, has been beset by macroeconomic shocks, leading to mixed results at the country-level. In May, Peru (+12%), Chile (+9%) and Mexico (+7.9%) contributed a significant portion of the region’s year-over-year growth, with markets such as Argentina (+3.9%), Brazil (+2.8%) and Colombia (-0.3%) experiencing slowdowns.

May was a difficult month for Middle Eastern airports, with the Qatari blockade close to entering its second year on 5 June and showing few signs of moving towards a resolution. The region’s passenger traffic has been suffering from slowdowns since tensions erupted and travel restrictions were enacted and has been trending downwards ever since. Apart from a short reprieve in March, where passenger traffic grew on a year-over-year basis, the region’s figures have been in the negative for all of 2018 up to this point. Although a number of major airports in the affected countries have seen their traffic figures degrade, Hamad International Airport (DOH) once again suffered the brunt of the impacts, its total passengers falling by 23.6% during the month on a year-over-year basis, and its year-to-date reaching -14.8%.

Freight volumes continued on an upward curve in May, reaching +5.1% on a year-over-year basis, from +4.5% in April and +2.4% in March. May’s results were just below year-to-date figures, which stood at +5.3%. For context, March and May 2017 figures were particularly high, with almost all regions reaching double-digit growth, leading to relatively slower figures this year. The domestic segment, particularly through North America’s high figures, drove a significant portion of that growth. It posted +8.6% for the period, compared to +3.6% for the international market. On a year-to-date basis, international freight has been growing at a slower speed than domestic freight this year, a change of pace from 2017.

North America and Latin America-Caribbean performed particularly well during the period, both reaching +8.6% on a year-over-year basis. North America’s figures showed solid gains for both Canada and the United States, with 14.3% and 8.5% respectively on a year-over-year basis. The United States freight market was still going strong in May, with a year-to-date figure standing at +6.9%. These numbers were mostly driven by domestic freight, which gained 11.3% in May, compared to 4.6% for the international segment. At the airport level, Miami (MIA) and Memphis (MEM) benefitted from strong growth rates, with 9.0% and 8.7% respectively.

As with passenger traffic, Chile and Mexico contributed a significant portion of growth to the Latin America-Caribbean’s freight market in May. The former posted +36.6% on a year-over year-basis, with its year-to-date growth reaching +21.1%. Mexico posted +10.3%, pushing its year-to-date to +9.5%. Chile’s Santiago airport (SCL), which suffered a slowdown in freight traffic in the first quarter of 2017, has managed to recover the loss since and has been growing at double-digit figures in the last six months. The airport posted an increase of 38.0% in freight volumes in May on a year-over-year basis.

Affected by 2017 numbers, Europe’s freight market suffered a relative slowdown during May, posting +1.3% after growing by 4.6% in April and 0.9% in March. Although year-to-date figures remain in moderate growth territory with 4% at the end of May, the region’s 12-months rolling average has been trending downwards in 2018.

As with Europe, Asia-Pacific’s growth, though still robust at +4.8% on a year-to-date basis, has been middling in recent months, its 12-months rolling average reaching +6.3% in May. Year-over-year growth in freight volumes in the region’s major markets was relatively homogeneous, with figures ranging from +6.1% for India, to +3.1% for South Korea. Chinese Taipei (+5.0%), Hong Kong (+4.7%), China (+4.4%) and Japan (+3.6%) all fell between this range. Asia-Pacific’s major air freight markets remain vulnerable to incoming tariffs from the United States through their consumer electronics exports. As such, this more moderate growth may remain for most of 2018.

The Middle East, where the freight market had long sustained growth despite local geopolitical tensions, fell for the second month this year, posting -0.9% for the month of May. Its year-to-date numbers stood at +0.4%, with a rolling 12-month average of +3.1%, which has been steadily declining. The slowdown was mainly due to the United Arab Emirates, the largest freight market in the region, which fell by 5.4% during the month, bringing its year-to-date figures to -4.4%. Qatar’s Hamad International Airport (DOH), despite the blockade, managed to grow by 4.6% on a year-over-year basis. The airport’s year-to-date figures stood at 8.4% at the end of May.

Africa, though remaining the smallest freight market of the six ACI regions, has been growing at a strong rate in the last year. May figures stood at +13.5%, pushing year-to-date figures to +11.4%. This is partly due to recovering figures in Nigeria and Egypt, which represent a major part of the region’s freight market and grew substantially during the month. Nigeria’s year-to-date figures stood at +10.2% in May. Egypt, which has been oscillating between declines and low growth rates in recent months, achieved +19.1% growth for the month on a year-over-year basis, pushing up its year-to-date to +1.0%.

“The air transport sector has shown remarkable resilience to the tense climate that looms over international relations and trade,” said Angela Gittens, Director General, ACI World. “Economic and political pendulums continue to move in opposite directions. On the one hand, historically low unemployment rates in the US and the European union have helped power consumer confidence and the propensity to travel by air in such markets. Moreover, the presence of the low-cost business model among carriers coupled with historically low jet fuel prices, have certainly acted as catalysts to stimulate air transport demand through lower fare offerings on certain market segments. Finally, the flourishing middle class in populous countries such as India and China have certainly helped to boost traffic especially in their respective domestic markets.”

Gittens added, “At the same time, we must be cognizant of the downside risks. For instance, the full impact of the erected tariff walls set by major economies such as the US and China is yet to play out before our eyes. Trade wars could potentially have a recessionary consequence on the global economy thereby jeopardizing advances in air transport demand.”

1. Airports Council International (ACI), the trade association of the world’s airports, was founded in 1991 with the objective of fostering cooperation among its member airports and other partners in world aviation, including the International Civil Aviation Organization, the International Air Transport Association and the Civil Air Navigation Services Organization. In representing the best interests of airports during key phases of policy development, ACI makes a significant contribution toward ensuring a global air transport system that is safe, secure, efficient and environmentally sustainable. As of January 2018, ACI serves 641 members operating 1953 airports in 176 countries.

2. PaxFlash and FreightFlash statistics are based on a significant sample of airports that provide regular monthly reports to ACI. They represent approximately 60% of total passenger traffic and 70% of total freight traffic worldwide. Commentary, tables and charts are based on preliminary data submitted by participating airports and are therefore subject to change. ACI’s Economics division is committed to building a valid, reliable, and the world’s most comprehensive source for airport statistics database. A formalised data collection procedure is in place to meet its data quality standards regarding timeliness, and also consistency, completeness, comparability, accuracy, and transparency.

3. Regional results and trend graphics are provided below. 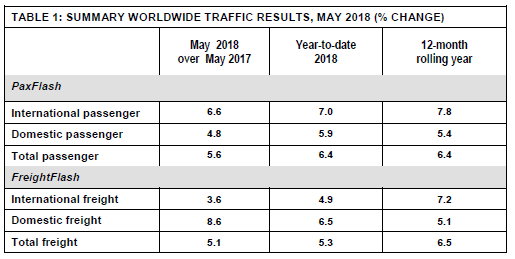 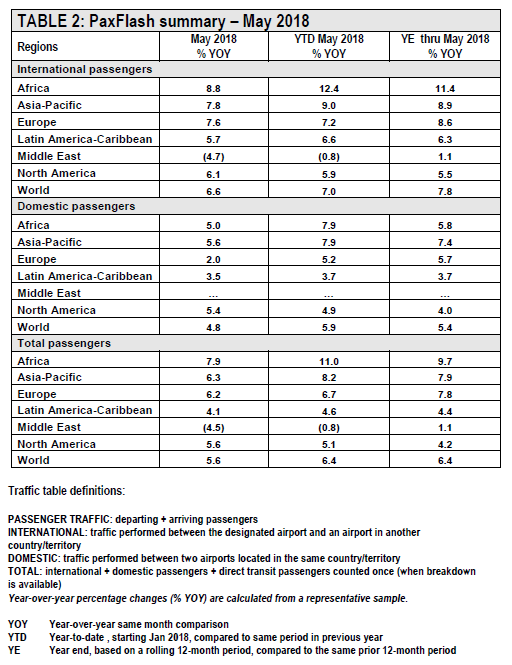 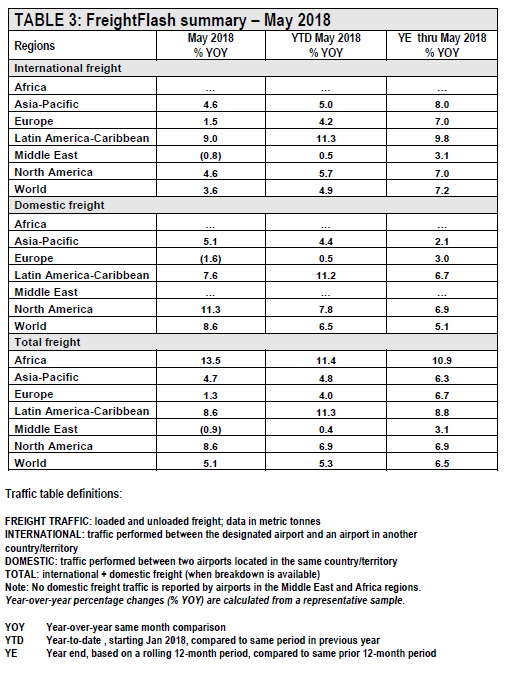