Although growth in passenger traffic remains robust, the month of April marked a slight departure from the recent months’ high growth levels mainly due to the timing of this year’s Easter period.

ACI’s month-by-month passenger and freight statistics are based on a significant sample of airports that provide regular reports and form part of one of the world’s most comprehensive sources for airport data.

“While passenger traffic has continued to follow the strong growth trend already established in 2018, we have seen the growth of freight volumes showing some signs of recovery from earlier in the year,” said Angela Gittens, ACI World Director General. “Breaking with a general trend observed over the last year, domestic traffic was the major contributor to global growth in April with international traffic slowing.

“International freight was the main driver of the bounce in volumes in April, following a slower month of March, with the market showing some resilience in the face of the growing risk of increased protectionism trade wars. Although the 12-month rolling average remained strong at 7.1%, it appears the high growth trend observed throughout most of 2017 is starting to subside.”

The global figure for domestic traffic reached 7.1% year-over-year for the month, bringing its year-to-date to 6.2%. International passenger traffic moderated to 4.9% for April, from 10.5% in March. In terms of total passenger traffic, Asia-Pacific and Africa both benefitted from high growth, with 9.9% and 9.0% respectively on a year-over-year basis. Most major Asia-Pacific markets posted solid growth during the period, with India, once again, leading the group, growing by 20.4% year-over-year. The country has recently been growing at a particularly fast rate, its 12-months rolling average now standing at 16%, from 14.3% in March. New Delhi’s Indira Gandhi International Airport’s (DEL) sustained growth brought its year-over-year figure to +16.8% in April. Bangalore’s Kempegowda International Airport’s (BLR) passenger traffic grew at an impressive pace of 46.1% during the same period,  , with its year-to-date figure reaching more than 30.%. The expansion was mostly driven by the airport’s domestic market, which represented 86.5% of its traffic in April. Indonesia and China also reached double-digit growth in April, with 13.5% and 11.8% respectively. Korea and Japan followed fairly closely, posting 9.2% and 7.0% respectively.

In Africa, Nigeria continued the recovery started in the second half of 2017, posting 36% year-over-year growth in April. The country has been fast reclaiming the ground lost during its economic crisis, with its year-to-date reaching 33.% and 12-months rolling average at 10.7%, and increasing. In Northern Africa, both Egypt and Morocco posted solid figures, reaching 13.3% and 9.6% respectively. Also recovering from a period of crisis, Egypt’s 12-months rolling average reached 16.0% in April.

Europe and North America’s passenger markets both grew at 5.0% year-over-year in April. Unequal growth patterns re-emerged in Europe, with several major markets such as Spain (2.8%), France (0.8%) and Germany (0.4%) posting subdued figures. These results were affected by the timing of Easter 2017, which came relatively late and boosted April figures last year. Following that trend, and against a backdrop of particularly difficult European Union exit negotiations, the United Kingdom posted -1.6% for the month on a year-over-year basis, with London’s Heathrow (LHR) and Gatwick (LGW) declining by 2.2% and 1.4% respectively. Europe’s peripheral markets continued their expansion, however, with countries such as Ukraine, Poland, Hungary, and Finland all growing by double-digit figures on both a year-over-year basis and year-to-date basis. Turkey and the Russian Federation also continued their recovery, with 14.2% and 11.6% respectively on a year-over-year basis.

North America’s passenger market was supported by the United States’ robust domestic segment in April, which reached +5.5% from +4.4% in March on a year-over-year basis. Latin America-Caribbean grew at 3.0% on a year-over-year basis during the period, with Mexico and Argentina experiencing relatively robust growth (8.8% and 6.9% respectively) despite complex internal situations. Chile, although having benefitted from a strong Q1 2018, saw a decline in April, posting -0.8%. The country’s year-to-date numbers were still strong, standing at +12.0%.

The Middle East posted traffic declines for the month of April, reaching -2.4% on a year-over-year basis. The region’s passenger traffic has been suffering from ongoing political crises affecting a number of countries, slowly bringing its growth trend downward. The Qatar diplomatic crisis, which started on 5 June of 2017, is still ongoing, dragging on the traffic flows of most countries on the Arabian Peninsula. The region’s year-to-date figures for total passengers reached 0.3% in April, and the slowdown is set to continue through the end of Q2.

Freight volumes regained momentum in April, following a slower month of March. International freight was the main driver of both shifts, representing around 70% of the global market. The segment’s year-over-year figure rose to 4.9% during the month, up from 1.9% in March.

Europe and Asia-Pacific both accelerated in April, after suffering from slowdowns in March for overall freight volumes. On a year-over-year basis, Europe posted 4.6% growth, up from 0.9% one month prior, while Asia-Pacific posted 4.2%, up from 1.0%. Europe’s freight growth was driven almost exclusively by its international segment, which represents more than 90% of the region’s volumes, and reached 4.8% during the period. As with its passenger market, the region displayed an unequal growth pattern for freight; while Belgium grew by 15.7% due to the success of Liège Airport (LGG). The Netherlands posted a 6.3% decline, with Amsterdam-Schiphol (AMS) falling by a similar figure. France, Luxembourg and Italy all posted depressed figures, at -2.9%, -1.2% and 0.5% respectively on a year-over-year basis. Meanwhile, Spain grew by 18.4%, reaching 16.7% on a 12-months rolling average basis. Freight volumes at Madrid-Barajas airport (MAD), the country’s major hub accounting for 53% of volumes in 2016, increased by 15.7% in April. Since May 2017, the airport’s freight market has benefitted from double-digit expansion in all but one month, where it grew by 9.8%.

Asia-Pacific, on the other hand, displayed more homogeneous growth patterns. Of its major air freight markets, all but Thailand (9.0%) and South Korea (0.4%) posted year-over-year figures between 2.0% and 6.0%. India (5.7%), Hong Kong (5.0%), China (4.9%), and Singapore (4.5%) all posted fairly strong growth. Taiwan and Japan, with 3.3% and 2.2% respectively, trailed behind slightly. Although the figures signal recovered momentum after a slower month of March, they may also hide a shift in freight trends for the region, which had been growing at a particularly fast rate until February 2018. April year-to-date figures stood at 4.7%, with a 12-months rolling average of 6.8%. While secular trends in global trade and economic activity remain positive, trade tensions and tariff wars may result in an adverse impact to the region’s air freight industry in the coming months.

North America has already started to experience more subdued growth in April as year-over-year-volumes slowed down to 3.7% year-over-year. This comes after a strong run leading to a +7.1% figure on a 12-month rolling average basis. Geopolitical tensions related to trade have recently escalated into import tariffs between a number of major economies and the United States, which may lead to a substantial slowdown in the coming months.

The Middle East’s freight market had, until March, proven relatively resilient to the geopolitical tensions which loom over its passenger market. Volumes declined by 2.1% in March, however, and the market’s 12-months rolling average is currently slipping, having reached 4.1% in April, down 0.2 percentage points after posting an increase of 2.6% year-over-year during the month. Given the general trends observed in the industry, a gradual slowdown may be in the region’s future in the coming months.

Latin America-Caribbean and Africa, the two smallest freight markets of the six ACI traffic regions, grew the fastest in April, at 12.5% and 9.9% respectively. The two regions have benefitted from a strong early 2018, with both year-to-date freight figures reaching double digits, at 11.7% and 10.7% respectively. These gains were driven mostly by rising international freight volumes, however, and may leave their markets vulnerable to global trade shocks.

1.Airports Council International (ACI), the trade association of the world’s airports, was founded in 1991 with the objective of fostering cooperation among its member airports and other partners in world aviation, including the International Civil Aviation Organization, the International Air Transport Association and the Civil Air Navigation Services Organization. In representing the best interests of airports during key phases of policy development, ACI makes a significant contribution toward ensuring a global air transport system that is safe, secure, efficient and environmentally sustainable. As of January 2018, ACI serves 641 members operating 1953 airports in 176 countries.

2. PaxFlash and FreightFlash statistics are based on a significant sample of airports that provide regular monthly reports to ACI. They represent approximately 60% of total passenger traffic and 70% of total freight traffic worldwide. Commentary, tables and charts are based on preliminary data submitted by participating airports and are therefore subject to change. ACI’s Economics division is committed to building a valid, reliable, and the world’s most comprehensive source for airport statistics database. A formalised data collection procedure is in place to meet its data quality standards regarding timeliness, and also consistency, completeness, comparability, accuracy, and transparency.

3. Regional results and trend graphics are provided below. 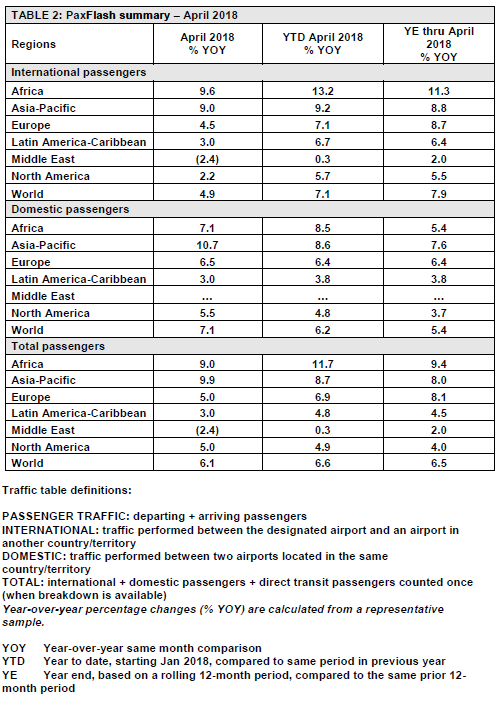 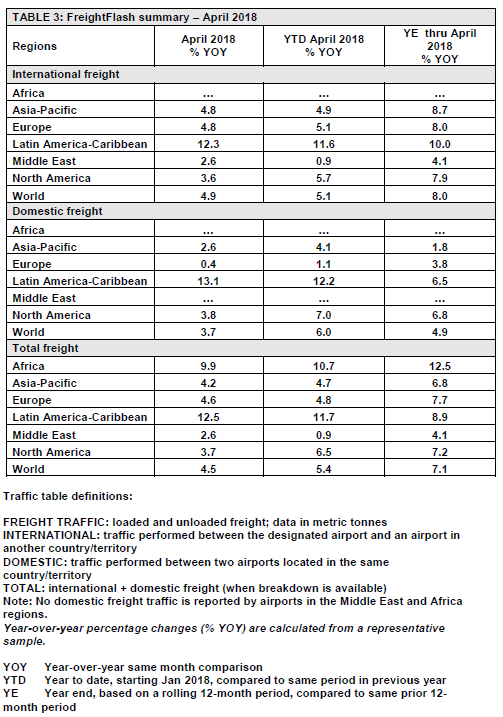