Montreal, 15 June 2018 – On the eve of the 28th  ACI EUROPE/World General Assembly, Congress & Exhibition hosted by Brussels Airport, Airports Council International (ACI) World has found that sound economic conditions in the first quarter of 2018 have helped bolster air transport demand. Passenger traffic grew 6.7% year-on-year for the first quarter and by 8.1% year-on-year for the month of March.

While gains in air freight volumes slowed in March, growing by only 2.4% year-on-year, accumulated volumes for the first three months jumped up by 5.5% as compared to the previous year.

“The strong start to 2018 illustrated the strong and clear link between aviation and trade and strong economic conditions,” said Angela Gittens, Director General, ACI World, “Healthy labor markets and rising consumer and business confidence are part and parcel of strong air transport and airport sector. An open approach to trade is also key to a burgeoning air freight sector, however. Even with the great strides that have been achieved in air transport demand across the world’s airports, the risk of adverse trade relationships among major economies still looms as a potential challenge.”

The major aviation markets of the Asia-Pacific region not only achieved high growth in passenger throughput year over year but were also the largest contributor to global growth in air transport demand. For the Region, passenger traffic increased by 8.2% for the first quarter of 2018. China, the leading market in Asia, boasted over 35% of the region’s passenger traffic. Guangzhou (CAN), the third busiest airport in China and one of the fastest growing hubs in the world, grew by 6.4% in the first quarter. India continued to capitalize on its strong appetite for air travel. Bangalore (BLR), New Delhi (DEL) and Mumbai (BOM) grew by double digit proportions at 33.1%, 14.7% and 11.4% respectively for the first quarter.

In Korea, Incheon (ICN), also continued to make headway. The airport’s passenger traffic grew by 10% in the first quarter of 2018. Route segments from Incheon to Japanese destinations represent some the busiest in the world and continue to grow.

The Middle East achieved one if its weakest growth rates since 2001.In the first quarter of 2018, passenger traffic grew only modestly, by 1.2%. The repercussions from the ongoing political strife among states in the Gulf Cooperation Council (GCC) have taken their toll on the region’s aviation market. Dubai International (DXB) grew by a slim 1.1% in the first quarter. Its competitor Abu Dhabi (AUH), declined by 10.7%. Doha (DOH), the Qatari hub also declined by 10.8% for the first three months of 2018. On the other hand, both Kuwait City (KWI) and Israeli hub Tel-Aviv (TLV) achieved a sharp increase that was just shy of 20% for the first three months of 2018.

European airports continued to achieve record gains in passenger traffic well above historical average annual growth rates, which are estimated at 4% per annum since the year 2000. The first quarter of 2018 saw passenger traffic jump up by 7.7% year-over-year. Capitalizing on both a strong hub airline and low-cost carrier (LCC) expansions, Frankfurt, now in fifth position in the region, grew by 10% in the first quarter while Amsterdam-Schiphol (AMS), in fourth position, expanded by 8.2%.

After a period of high tension that left passenger traffic in a weakened state starting in 2016, Istanbul-Atatürk (IST), led the pack with passenger growth of 21.5% on a year-to-date basis in March. Paris (CDG), grew at 4.6% while London Heathrow (LHR) remained in the top position, but continued to grow at the slower pace,3.1%.

Turning to Latin-America-Caribbean, after a lackluster year in 2017, many aviation markets experienced a resurgence with a gain of 5.4% in passenger numbers for the first quarter. Passenger traffic in Brazil rose in tandem with this recovery. São Paulo (GRU) achieved growth of 3.5% in the first quarter. Mexico experienced 9.6% growth across the country’s airports. Mexico City (MEX) had quarterly growth of 7.2% and. Guadalajara (GDL) rocketed up 16.1% during the same quarter. Major commercial airports in Argentina, Chile and Peru registered growth of 11.0%, 15.6% and 10.9% respectively.

Colombia on the other hand, showed some weakness as passenger traffic experienced a decrease (-0.35%) in passenger throughput in the first quarter.

North America continued to achieve growth rates well above its mature market status. Spanning almost two decades, average annualized growth rates have hovered in the realm of 1%. Thus, a growth rate of 4.8% for the first quarter of 2018 is indicative of the resurgence and strength of the United States aviation market. Major Canadian airports saw passenger traffic grow by 6.5% whereas airports in the United States observed an increase of 4.7%. Los Angeles (LAX) continued to make headway, growing by 6% in the first quarter. Similarly, Toronto (YYZ), on a year-to-date basis grew by 6.5% in total passengers and 7.8% for international passenger traffic. San Francisco (SFO), also experienced strong growth of 8.5%. Capitalizing on the spring break period, both Fort Lauderdale (FLL) and Orlando (MCO) observed robust growth on year-to-date basis to March posting growth of 9.6% and 8.7% respectively.

The Asia-Pacific region saw volumes increase by 4.8% in the first quarter. China, the region’s largest market, saw its major freight hubs grow by 6% year-over-year. Hong Kong (HKG), the world’s busiest air freight hub, achieved growth of 4.3%. The second and third busiest airports in the region, Shanghai (PVG) and Incheon (ICN), experienced modest growth of 2.7% and 2.2% respectively for the first quarter. Japan, the second largest aviation market after China, saw volumes inch up by 1.6% across its major airports.

The Middle East region experienced no gains in freight volumes for the first quarter of 2018. Air freight volumes across its major airports saw a decline of 5.6% in the first quarter. Dubai (DXB) experienced a decline of 3.2%, whereas Dubai World Central (DWC), a sister airport with growing air freight traffic, grew by 8.8% on a year-to-date basis. The sharpest decline by a UAE airport was observed by Abu Dhabi (AUH) with an overall contraction of 24.8%. Doha (DOH), a Qatari hub and the second busiest airport in the region, experienced an increase of 9.5% in the first quarter.

Air freight volumes for Europe as a whole grew by 4.7% for the first three months. Growth remains heterogeneous across the region. Frankfurt (FRA), Paris (CDG) and Amsterdam (AMS) experienced declines of 0.8%, 1% and 2.1% respectively. Heathrow (LHR) grew by 4.3% while Leipzig (LEJ) had a double-digit increase of 11.3%. Istanbul (IST) stands out among this pack with a massive increase of 25.1% on a year-to-date basis. Turkish Cargo, a major flag carrier operating out of IST, capitalized on strategic opportunities to increase their routes significantly in 2017.

In Latin-America-Caribbean, despite some pockets of uncertainty, the region remained on the path to recovery. After several years of stagnation, air freight volumes in Latin-America-Caribbean experienced a surge in the first quarter of 2018. Year-over-year growth was 11.5%, the highest increase of all regions. Air freight traffic at Brazilian airports had the greatest recovery with volumes jumping up by 20.3% in the first quarter. Sao Paulo (GRU), Brazil’s busiest freight hub, saw volumes increase by 17.7%. Mexico’s airports saw volumes increase by 7.7%. Large gains in volumes were also observed at Puerto Rican, Argentinean, and Chilean airports. San Juan (SJU) Buenos Aires (EZE), and Santiago (SCL) each saw double-digit gains of 38.6%, 24.2% and 17.9% respectively.

Air freight volumes for North American airports grew by 7.1% in the first quarter.  Many of the major players achieved above average growth for the first three months of 2018. Louisville (SDF), Chicago (ORD) and Anchorage (ANC), major American freight hubs, were some of the notable airports that achieved large strides in volumes. Fueled especially by international freight traffic growth, these airports experienced increases of 9.5%, 7% and 6.7% respectively.  In tandem with the growth of e-commerce and express delivery, Cincinnati (CVG) grew by a spectacular 41.4% on a year-to-date basis.

1.Airports Council International (ACI), the trade association of the world’s airports, was founded in 1991 with the objective of fostering cooperation among its member airports and other partners in world aviation, including the International Civil Aviation Organization, the International Air Transport Association and the Civil Air Navigation Services Organization. In representing the best interests of airports during key phases of policy development, ACI makes a significant contribution toward ensuring a global air transport system that is safe, secure, efficient and environmentally sustainable. As of January 2018, ACI serves 641 members operating 1953 airports in 176 countries. 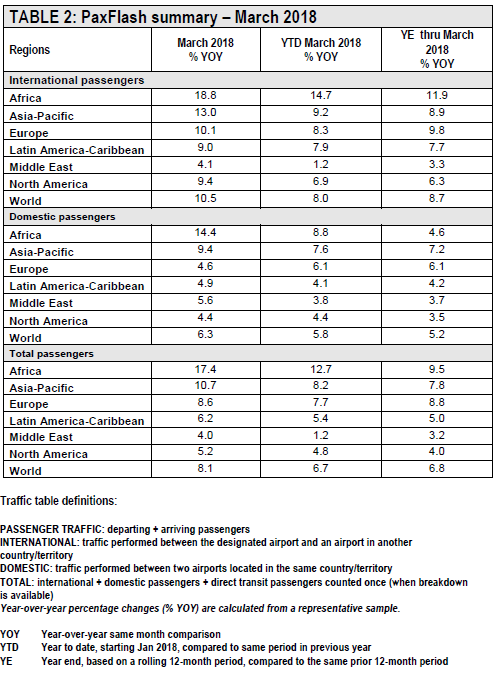 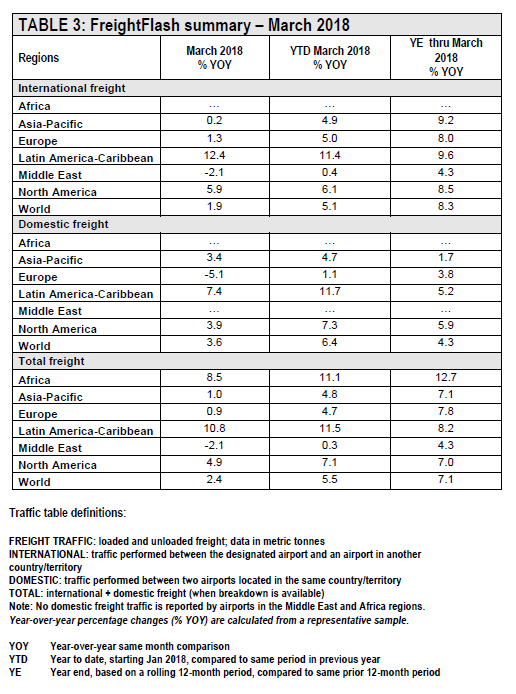