Montreal, 2 May 2018 – Airports Council International (ACI) World reported global passenger traffic grew by 6.6% in February on a year-on-year basis. This growth is in line with the 12-month rolling average of global growth which has also been recorded as +6.6%.

The numbers signalled regained momentum in global passenger growth following a slower January which was negatively affected by the timing of the Lunar New Year.

The continued high growth figures posted by the global freight market moderated in February, reaching +6.3% year-on-year. The impact this has on the 12-month rolling average for the freight market – which stands at +7.9% – is limited but the prospect of a trade war between the United States and other major economies risks eroding the strength of this continued growth.

“Growth in air traffic has gained momentum at the beginning of this year. While the Asia-Pacific region led the world again in the rate of growth, all regions posted solid gains despite some escalating political tensions around the globe,” said Angela Gittens, Director General, ACI World. “The global freight market showed remarkable resilience in the face of challenges including the prospect of a trade war between the United States and other major economies which threaten to erode the strength of this continued growth. ACI World provides leadership, global advocacy and training to raise standards across all airport operations to promote a safe, secure, sustainable and efficient air transport system that can continue to meet the challenges of demand and growth.”

International passenger traffic, which grew by +7.5%, was once again the major driver for the global passenger market in February while domestic traffic also fared well. Domestic traffic grew by +6.0% during the period on a year-on-year basis, with most regions posting growth of +5.0% or more.

In the major aviation markets, Asia-Pacific’s total passenger traffic grew the fastest with +8.2% on a year-on-year basis, bringing its 12-month rolling growth rate to +7.5%. India and Indonesia continued their double-digit growth, reaching +19.9% and +15.1% respectively on a year-on year basis for major commercial airports. The two countries’ rolling 12-month figures are currently posting +14.3% and +10.8%, well ahead of their region’s annualized growth.

New Delhi’s Indira Gandhi International Airport (DEL) benefited from high growth rates for both international (+11.1%) and domestic (+16.6%) passengers during the period. The airport has been contributing to a significant portion of India’s growth in the last twelve months. In Indonesia, Jakarta’s Soekarno-Hatta International Airport (CGK) and Halim Perdanakusuma Airport (HLP) experienced both robust growth, reaching 11.6% and +25.4% respectively on a year-on-year basis. HLP’s growth has been significant in the recent months, with double-digit growth during each of the last nine months.

Europe and North America followed Asia-Pacific, gaining 6.6% and 5.5% respectively on a year-on-year basis. The numbers were a slight departure from the two regions’ 12-month rolling averages, standing at +8.7% and 3.8% respectively.

In Europe, major economies recorded more modest rates of growth in February, with Germany posting +2.3%, France +1.8%, and the United Kingdom +1.2% on a year-on-year basis. Other markets contributed to the region’s success during the month. Turkey and the Russian Federation, both continuing their recovery, posted +17.6% and +9.9% respectively. In line with their high growth rates in the last twelve months, Poland, Portugal and Spain all grew substantially during the period, with +15.7%, +10.1% and +9.1% respectively across these countries’ major airports.

In North America, Canada led the way with +7% on a year-on-year basis, followed by the United States with +5.7%. Both markets have been growing at a slower but steady pace in the recent months, reaching 12-month rolling figures of +6.5% and +3.6% respectively.

Africa and Latin America-Caribbean grew by 9.3% and 6.5% respectively on a year-on-year basis. Africa’s 12-month rolling figures stood at +8.0% at the end of the period as the region’s economies dealt with volatility while still maintaining an upward recovery trend. In a similar context with regards to volatility, Latin America-Caribbean’s 12-month figures reached +4.9%. Although the region’s international market has been growing at a robust pace, its domestic market growth rate has not had the same level of growth in recent months.

Geopolitical tensions throughout the region, as well as the blockade in Qatar, continued to depress the Middle East’s passenger figures, despite the region’s freight figures remaining positive. Total passenger traffic in the region declined by 1% in February, falling into negative territory for the second month in a row. The 12-month rolling figure for the region has been on a downward trend for five months, now standing at +3.2%.

Continued economic growth and global trade led to an increase of +6.3% in total freight volumes in February. The change of pace was mostly due to a lower growth rate for international freight, which reached +6.4% during the period, three percentage points lower than its 12-month rolling figure of +9.4%. Domestic freight increased by +5.9% during the month, pushing its rolling 12-months to 4.3%.

Of the major markets, North America led the way with +8.2% year-over-year, bringing its 12-month rolling numbers to +7.1%. The United States’ air freight market has shown remarkable resilience despite increasing tensions related to trade.

Europe and Asia-Pacific posted moderate growth in freight volumes in February. The former stood at +6.0% on a year-on-year basis, down from +8.1% in January. Turkey’s air freight market continued its recovery, reaching +27.3% year-over-year, pushing its 12-month rolling figures to +18.7%. Belgium’s air freight market, boosted by the success of Liège Airport (LGG) as a cargo hub, posted +8.0%.

Asia-Pacific’s air freight market grew by 4.7% during the period, down from a growth rate of 8.3% in January. Despite a momentary slowdown, the region’s 12-months rolling figure was +8.2%. With global macroeconomic outlooks remaining positive for 2018, the region’s air freight market may resist the downward trends caused by trade policy pressures. The Philippines and Indonesia posted high numbers in February, reaching +21.6% and +17.9% respectively. India and Thailand followed with +9.7% and +8.3%.

Like its passenger market, India’s freight market, with a 12-month rolling figure of +14.2%, is currently recording significant growth. Although its two major cargo hubs, New Delhi (DEL) and Mumbai (BOM), have been driving a major part of this, smaller airports, such as Bangalore (BLR) and Chennai (MAA), have also provided a substantial contribution, growing by 14.1% and 12.3% respectively in February.

1. Airports Council International (ACI), the trade association of the world’s airports, was founded in 1991 with the objective of fostering cooperation among its member airports and other partners in world aviation, including the International Civil Aviation Organization, the International Air Transport Association and the Civil Air Navigation Services Organization. In representing the best interests of airports during key phases of policy development, ACI makes a significant contribution toward ensuring a global air transport system that is safe, secure, efficient and environmentally sustainable. As of January 2018, ACI serves 641 members operating 1953 airports in 176 countries. 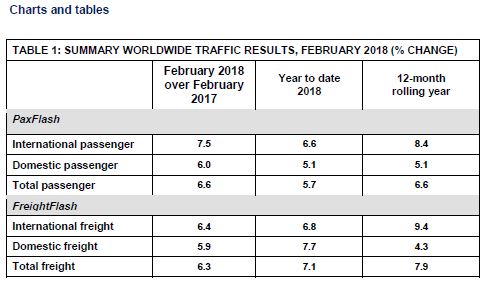 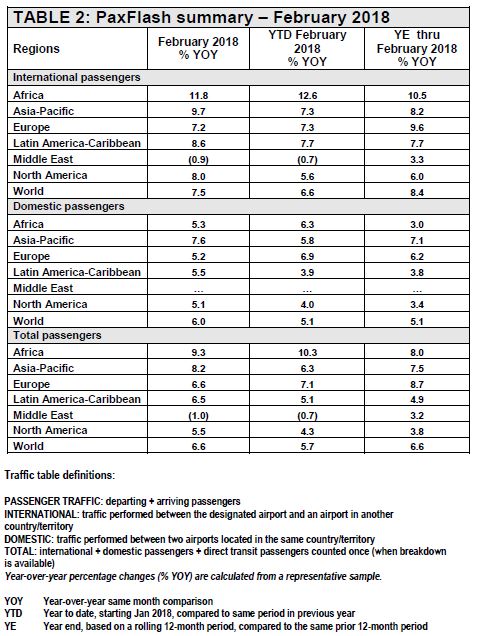 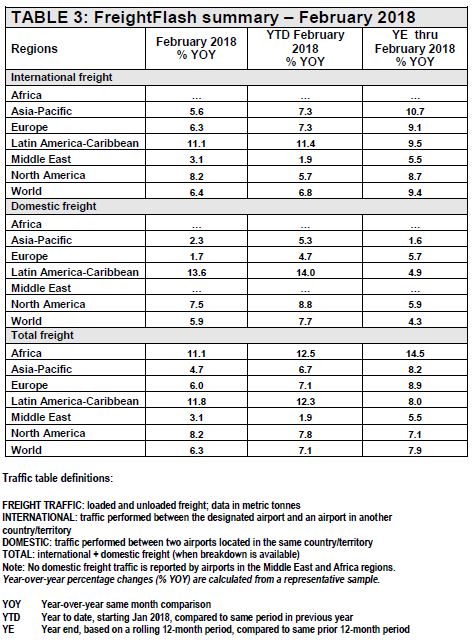