While, at first glance, the trend in growth appears to have slowed following a robust year-end, this is in reality linked partly to the timing of Lunar New Year which took place in February instead of January in 2017. Higher passenger traffic was expected during this holiday, considered the world’s greatest annual migration of people, so year-on-year figures for February are expected to show a significant increase as a result.

As to global freight, figures maintained a high growth momentum in January, posting +8.0% increase as compared to the previous year, in line with the rolling year-end figures.

Passenger traffic growth was more moderate in January for most regions following a successful year in 2017. International passenger traffic, which was the major driver for global traffic increases in 2017, closed the gap with domestic traffic during the period. The two market segments grew at +5.8% and +4.3% respectively.

Globally, the mature market of Europe grew faster than other regions, posting +7.6% in total passenger traffic on a year-on-year basis. This regained momentum drove its rolling 12-month figures to +8.6%, after a modest growth of +5.2% in December. The region’s domestic market performed comparatively well, posting +8.7% for the month of January. At the national level, most of Europe’s mature markets grew at a moderate pace, standing between +1.5% (United Kingdom) and +5.9% (Italy). Two countries played an important part in the region’s high growth for the month: Turkey, still recovering from a major downturn in air traffic, grew at +28.1%, followed by the Russian Federation (+12.2%). The air transport sectors are in full recovery in these markets following a weakened state in 2017.

Asia-Pacific and North America, while still growing at a robust rate, slowed slightly during the period, respectively posting +4.4% and +3.2% year-on-year. Nevertheless, Asia-Pacific’s figures are expected to rebound significantly in February as a result of the Chinese Lunar New Year. India was a significant outlier in the region’s major markets in January, posting +15.3% for the month.

Africa, which has benefitted from consistently high growth in passenger traffic since recovering from a difficult macroeconomic context in April 2017, posted +11.4% year-on-year. The region’s growth was attributable to Egypt, Morocco and Nigeria, with figures of +21.7%, +16.6% and +13.1% respectively.

The Middle East fell during January, posting a slight -0.4% decline on a year-on-year basis. With geopolitical unrest affecting a number of countries in the region, and the blockade of Qatar still upheld, slower growth is likely to continue in the mid-term. As of the latest figures, the region’s rolling 12-month figures were still relatively robust, with +3.9% at the end of January.

Despite the uncertainty regarding the protectionist rhetoric that swept across many countries, continued high growth in air freight volumes may very well be a trend in the short term. On the back of a strengthened global economy and trade, the air freight market has shown remarkable resilience to disruption in the last year. At the regional level, nearly all regions posted growth reaching +8.0% or more for the month of January.

In the major markets, North America led the way with +8.8%, closely followed by Asia-Pacific (+8.3%) and Europe (+8.1%). At the national level, the United States (+8.8%) drove most of the increase in North America, with Canada growing at a slower pace of +3%. In the Asia-Pacific region, Indonesia (+26.2%), China (+12.5%), and India (+9.7%) all contributed to the region’s high figures. Most major countries grew at a solid pace in Europe; Turkey and Spain both reached particularly high numbers, posting +32.6% and +19.0% respectively. Luxembourg, Belgium and Italy followed closely, all growing by double-digit figures.

The Middle East was the exception, continuing its slowdown to reach +0.7% in January. Although the region’s rolling 12-month figures remained strong at +5.4%, a downward trend was visible in the last four months, after a surge of high growth during the summer of 2017.

Not all major markets performed well, however, with the Philippines (-22.7%), Venezuela (-18.7%), and Egypt (-5.4%) all pulling their respective regions down slightly.

1.Airports Council International (ACI), the trade association of the world’s airports, was founded in 1991 with the objective of fostering cooperation among its member airports and other partners in world aviation, including the International Civil Aviation Organization, the International Air Transport Association and the Civil Air Navigation Services Organization. In representing the best interests of airports during key phases of policy development, ACI makes a significant contribution toward ensuring a global air transport system that is safe, secure, customer-focussed and environmentally sustainable. As of January 2018, ACI serves 641 members operating 1953 airports in 176 countries. 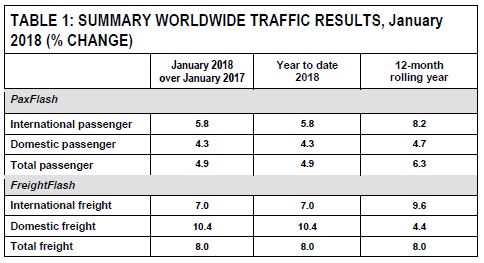 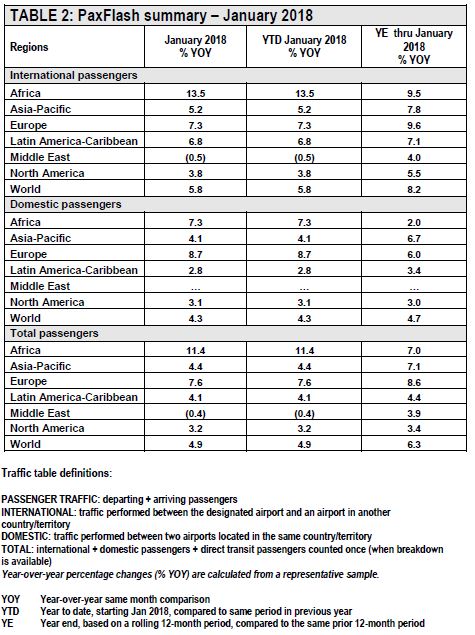 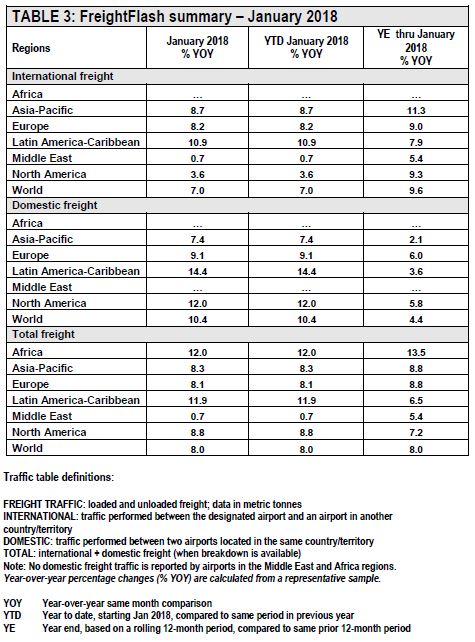