Montreal, 28 February 2018–Airports Council International (ACI) World reported global passenger traffic up 5.7% in December 2017 on a year over year basis. For the year as a whole, preliminary numbers show an increase of 6.4% in passenger volumes across the world’s airports. Growth was above 6% for the third year in a row. December’s freight volumes rose by 5% on a year over year basis. Global freight figures achieved record growth this year standing at 7.9% for 2017, representing the highest growth rate since 2010, the recovery year following the deepest downturn of 2009 during the Great Recession.

In spite of looming challenges that remain on the horizon, passenger traffic continued to march to the beat of its own drum, posting annual growth rates above historical averages. The combination of concerns over the risk of trade protectionism and geopolitical tensions were insufficient in curbing the flow of passengers across the world. Global travel and tourism remained irrepressible. With several years of continued robust growth, passenger traffic surpassed the 8.2 billion marks in 2017. These encouraging results may be a sign that fears concerning the impact of inward-looking policies have not fully precipitated across sectors of the economy.

European and Asia-Pacific markets have been driving the increases. Despite the uncertainty over the outcomes of the United Kingdom’s withdrawal from the European Union, Europe’s largest aviation markets continued to make large strides in passenger traffic reaching record-breaking growth of 8.5% year-over-year for the region. Strong overall business and consumer confidence coupled with the offer of competitive transportation options by carriers continued to boost the propensity for air travel. After Europe’s large strides, the Asia-Pacific region experienced strong demand for air travel as well. Many Indian and Chinese airports continued to achieve growth of a double-digit magnitude in 2017. Preliminary figures point to growth of 7.8% for the region in 2017.

Middle Eastern airports have observed moderate passenger traffic growth in 2017 as compared to previous years at 4.7% year-over-year. This was due mainly to the Qatari diplomatic crisis that resulted in travel bans and trade blockades between Qatar and other Middle Eastern countries acting to pull down the region’s previously robust growth.

North America, even with its mature market status, achieved gains of 3.5% year-over-year in 2017. This is above its average 1.1% per annum over the last two decades. The continued inroads made by companies such as Southwest Airlines, the world’s largest low-cost carrier, as well as expansive global growth in the burgeoning Pacific and Central American markets are among the catalysts of this growth. Some of the region’s largest hubs attained a resurgence in growth over the last couple of years— Denver (DEN), San Francisco (SFO) and Los Angeles (LAX) grew by 5.3%, 5.1% and 4.5% respectively in 2017.

Air freight markets experienced a strong revival after gaining momentum in the latter half of 2016. Airports handled almost 120 million metric tonnes of volumes in 2017 as a result of a record-breaking jump of 7.9% from 2016. All regions posted robust growth in volumes. Spurred by strong gains in cross-border trade, the largest markets of Europe, Asia-Pacific and North America experienced overall increases in total freight volumes of 8.7%, 8.5% and 7.3% respectively.

Despite the backdrop of economic uncertainty regarding trade policies in the United States and the United Kingdom, two of the world’s largest aviation markets, business confidence persevered into 2017. Global trade and industrial production continued to make gains on the cyclical recovery in the global economy, which translated into growth in air freight volumes. Inventory build-ups, augmented export orders and a strengthening of consumer demand reflected in increased online purchases are important drivers in the near-term. Lastly, a temporary substitution effect away from ocean cargo, as a result of marine industry consolidations and bankruptcies, also boosted air cargo volumes over the short-term. The reliability factor associated with shipments by air as a swift mode of delivery remained a viable option especially where consumer demand for high value-added goods and perishables remain buoyant. Similarly, express parcel deliveries that are generated from online purchases are also an important driver in the upward surge in volumes shipped by air. Online retail giants such as Alibaba and Amazon continue to grab hold of their logistical operations by setting up regional hubs. While Alibaba centers its logistical operations at airports in China and recently Malaysia, Amazon occupied strategic airports in North America such as Cincinnati/Northern Kentucky International Airport (CVG), located in the Midwest United States for its operations. Even though Amazon’s air cargo facilities will not be operational until 2020, the airport is among the fastest growing in the world in terms of freight traffic. CVG’s freight volumes grew by 28.7% in 2017.

“Since the end of the Great Recession in 2009 to early 2010, global passenger traffic has been growing at an average rate of 5.5% annually—a testament to air transport’s resilience,” said Angela Gittens, Director General, ACI World, “Air freight markets experienced one of the sharpest upward jumps in volumes in decades.”

“At the same time, we must be cognizant of the impediments that could curtail the continued rise in demand, potentially hampering growth prospects over the short- and medium-term,” Gittens added. “Specifically, these are related to geopolitical unrest, terrorism and threats to security in certain parts of the world. Physical capacity considerations and potential bottlenecks in air transport infrastructure also pose challenges in accommodating future air transport demand. As well, protectionist policies that retreat from further economic integration and air transport liberalization could contract air service demand.”

1.Airports Council International (ACI), the trade association of the world’s airports, was founded in 1991 with the objective of fostering cooperation among its member airports and other partners in world aviation, including the International Civil Aviation Organization, the International Air Transport Association and the Civil Air Navigation Services Organization. In representing the best interests of airports during key phases of policy development, ACI makes a significant contribution toward ensuring the global air transport system is safe, secure, efficient and environmentally sustainable. As of January 2018, provisional figures show that ACI serves 641 members operating 1,953 airports in 176 countries. 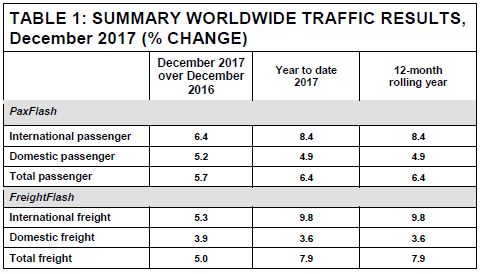 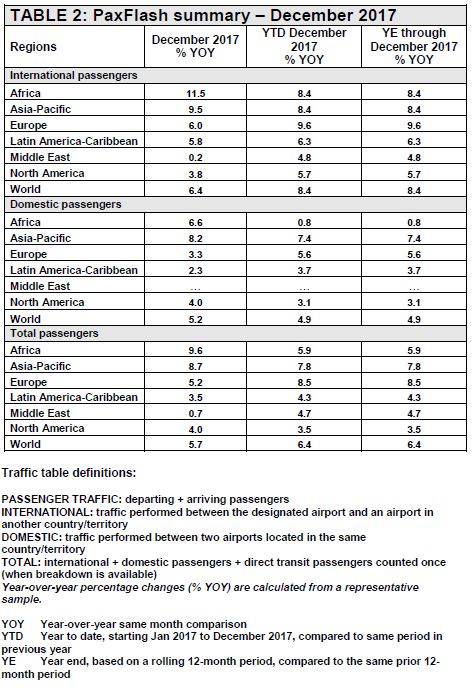 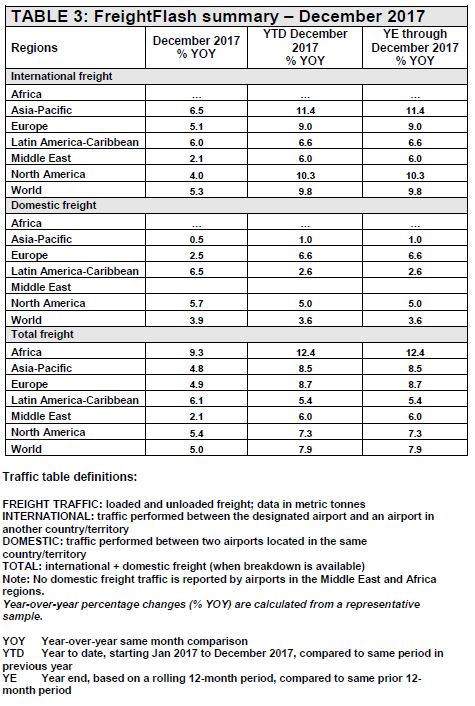