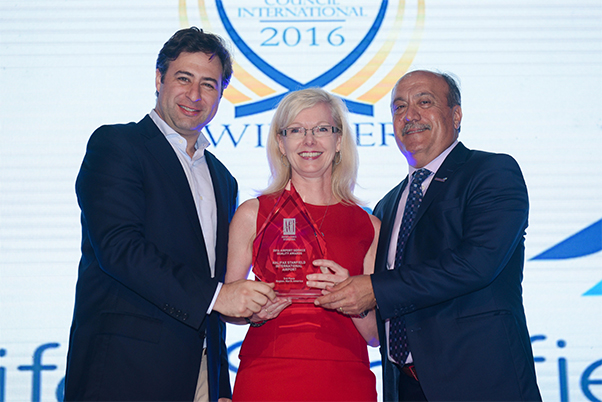 (From left to right) Martin Eurnekian, Incoming Vice-Chair, ACI World and CEO, Corporación América presents Joyce Carter, President and CEO, HIAA and Wadih Fares, Chair, HIAA Board of Directors with their 2016 ASQ Award at the ASQ Awards Ceremony in Mauritius.

“ACI is delighted that Halifax Stanfield will be the first to host the inaugural Customer Excellence Global Summit,” said Angela Gittens, Director General, ACI World. “They have proven themselves dedicated to continuous improvement of the customer experience at the airport, using the feedback they receive from their customers through the ASQ programme as a management tool. Their ASQ Award demonstrates the success of their efforts. This event is truly a response to the high priority airports place on providing excellent service to the passenger while at the airport.”

“We are extremely pleased to be chosen to host this event next year,” said Joyce Carter, President and CEO, HIAA. “It is a perfect fit given our airport’s past and continued success in ASQ on the international stage and it provides us with a wonderful opportunity to showcase our city to attendees from around the globe.”

This ACI conference will combine the traditional multiple ASQ Forums held throughout the year into one international annual ASQ Forum and Summit, providing the industry with a much needed platform to exchange best-practice and lessons learned on providing the airport customer experience, challenges and trends, and how ever-evolving technology impacts customer experience management. The one-day Forum and following two-day Summit will be open to ASQ subscribers as well as those airports who desire information about the ASQ programme.

In addition to the Forum and the Conference, the event will include a Gala dinner and the prestigious annual ASQ Awards Ceremony. The tripartite event is expected to attract a large number of delegates and provide Halifax Stanfield, the city and province, with international exposure and business development opportunities.

The decision for Halifax Stanfield to host was confirmed last week at the ACI Annual General Assembly in Port Louis, Mauritius, where this year’s ASQ Awards Ceremony was held. Halifax Stanfield received recognition for overall passenger satisfaction in North America in the 2016 ratings, receiving an award for third place in North America. “We were delighted to accept this award on behalf of the entire airport community,” concluded Carter. “Being acknowledged by our passengers is a true honour. We believe recognition like this comes as a result of great cooperation and collaboration among everyone in our airport community and these awards validate our unique approach to the customer experience.”

ASQ Awards are presented to airports whose passengers have rated them the highest over the course of a year, based on their demonstrated commitment to providing excellent customer experience.

1.Airports Council International (ACI), the trade association of the world’s airports, was founded in 1991 with the objective of fostering cooperation among its member airports and other partners in world aviation, including the International Civil Aviation Organization, the International Air Transport Association and the Civil Air Navigation Services Organization. In representing the best interests of airports during key phases of policy development, ACI makes a significant contribution toward ensuring a global air transport system that is safe, secure, efficient and environmentally sustainable. As of January 2017, ACI serves 623 members operating 1,940 airports in 176 countries.

2. Halifax Stanfield is Atlantic Canada’s principal full-service airport providing passengers and cargo clients with access to markets across Canada, the United States, the Caribbean Basin, Europe, Asia and the Middle East. It’s the only airport in Atlantic Canada to offer Canada Customs services on a 24 hour, seven day a week basis, and U.S. preclearance. The Airport, a major economic generator valued at over $2.7 billion to the provincial economy, serves over 3.9 million passengers and processes more than 33,300 metric tonnes of cargo. A recognized innovator in the global airport industry, Halifax Stanfield is the first airport in North America to offer a self-service baggage drop system for all passengers and is consistently ranked among the best airports in the world.

3. The ASQ programme is the only worldwide programme to survey passengers at the airport on their day of travel. Every year, the Programme delivers some 600,000 individual surveys in 42 languages in 85 countries. It measures passengers’ views of 34 key performance indicators, including airport access, check-in, security screening, cleanliness of restrooms, stores and restaurants.

4.  View the photos of the 27th ACI Africa/World Annual Assembly, Conference and Exhibition.

Back to facts on airport charges: response to statements at IATA AGM