Montréal, 19 September 2017 –  Airports Council International (ACI) has released the latest edition of the World Airport Traffic Report. ACI’s flagship publication, representing over 2,400 airports in 175 countries worldwide, reveals that many mature market airports have made large strides in their throughput volumes.

“The irony is that several of the mature markets appear to be no longer mature as compared to their historical growth levels as they diverge from the average annual growth rates,” said Angela Gittens, Director General, ACI World. “Instead of seeing year over year growth rates that converge to expected values and conventional forecasts, growth rates for a number of airports are approaching what we see in some emerging markets.”

Boasting a large short- and medium-haul domestic market for both passenger and air cargo traffic, the United States remains the leading country aviation market in the world. While international traffic still represents a small share, the growth rates in international passenger traffic are substantive at many of North America’s airport hubs. The feedback loops and multiplier effects from travel to and from some of the most populous emerging markets is also evident in the burgeoning trans-Pacific market. Asian airlines continued to make important inroads in the North American market on key international and trans-Pacific segments across many airport pairs such as Los Angeles–Beijing and Los Angeles–Shanghai among others. West coast airports such as Los Angeles (LAX), which boasts over 80 million passengers per annum, saw traffic leap 8% in 2016. Strong growth is also observed on routes between North American airports and other major hubs in Latin American markets such as Mexico and Argentina.

Low-cost carriers operating on short-haul routes have come to occupy a large share of the European aviation market. These carriers have provided almost half of the intra-Europe capacity in 2016. Spain, which is one of Europe’s largest market, has recovered quickly from its recession during the Euro area crisis. The country market has experienced significant growth at its major airports, brought by the expansion of low-cost carriers and competitive fare pricing.

European aviation is characterized as a highly competitive air transport market. The continued inroads made by the low-cost carrier, high frequency and volume intensive business model, coupled with the positioning of Middle Eastern and Turkish hubs for enhanced connectivity, have galvanized the mature European market. Even considering the devastating terrorist attacks that took place at Brussels (BRU) and Istanbul-Atatürk (IST) airports, passenger and air cargo traffic grew 5.2% and 5% respectively. The versatility of the overall European air transport sector made itself evident through destination switching by passengers. Moreover, because of the huge array of connecting options at airports across Europe, passengers were quick to switch to other airports to connect their journeys. Estimates point to significant growth of 9% for European airports during the first half of 2017 with many of the region’s largest hubs achieving above average growth levels. 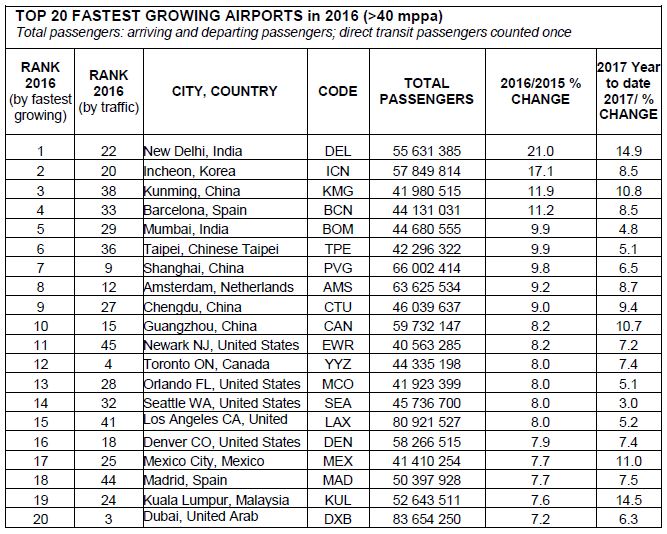