ACI has released the World Airport Traffic Forecasts 2016–2040, marking the beginning of the ACI-NA/World Annual General Assembly, Conference and Exhibition

Highlighting the conferences three-day programme aimed at charting the course for a safe, secure, sustainable and economically viable future for the world’s airports, the WATF presents aggregate airport traffic projections at the global, regional and country levels based on internationally comparable airport traffic data. Both absolute figures and compounded annual growth rates are presented over three time horizons which include short-, medium- and long-term over the 2016-2040 period.

With global traffic surpassing the 7 billion passenger mark in 2015, and expected to double by 2029 based on a projected growth rate of 5.2% per annum, the WATF is an indispensable resource. “Air transport forecasts are a crucial element in airport planning and for the determination of future capacity requirements,” said Angela Gittens, Director General of ACI World. “Because infrastructure projects are costly and often disruptive, a data-driven understanding of future demand—such as the expected number of aircraft movements, passenger traffic throughput and air cargo volumes—gives airport planners and investors the necessary information for effective decision making.

“Irrespective of short-term fluctuations in the business cycle, future growth in air transport demand will originate to a large extent from emerging markets,” Gittens continued. “Large population bases and increases in per-capita incomes in these markets are major forces driving this demand. At the same time, microeconomic factors, which include heightened competition across the aviation sector and the increased presence of the ‘no-frills low cost’ business model among air carriers, will continue to stimulate demand with lower airfares.

“However, there are several impediments that could curtail the continued rise in demand, potentially hampering growth prospects over the short- and medium-term. Specifically, these are related to geopolitical unrest, terrorism and threats to security in certain parts of the world. Physical capacity considerations and potential bottlenecks in air transport infrastructure also pose challenges in accommodating future air transport demand. Finally, protectionist policies that retreat from further economic integration and air transport liberalization could contract air service demand,” Gittens elaborated.

With respect to cargo, Gittens advised that, “the weakened global economy and a sluggish global trade environment were definite deterrents to growth in air cargo volumes. There also continues to be a structural substitution effect in the delivery of goods across modes of transport, even in the face of strong economic fundamentals. While the shipment of raw materials and perishables have been affected the most by a move away from air cargo services to ocean freight, the modal shift can also be seen in shipments of high-tech and machinery parts. The largest trade flow from Asia has experienced the weightiest shift away from air cargo. Thus, in the short to medium terms, global air cargo volumes are expected to increase modestly, in the realm of 2.4% on annualized basis up to 2025.”

In addition to global forecasts, regional forecasts have been developed for Asia-Pacific, Africa, Europe, Latin America-Caribbean, Middle East and North America. Airport traffic forecasts are also presented for major markets which comprise of individualized national projections for over 90 countries.

The WATF is distributed in a standard EXCEL format. For a detailed understanding of the methodologies used to produce the forecasts, please refer to the ACI Guide to World Airport Traffic Forecasts. 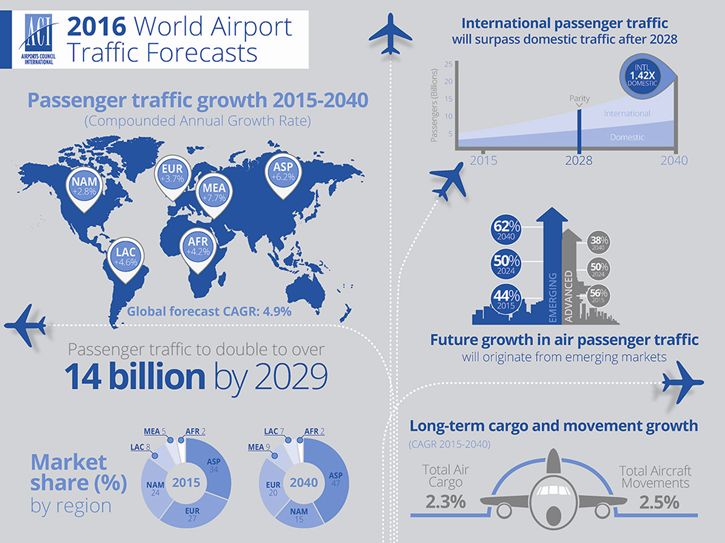