Montréal, 12 May 2016 –Even though March performance shows a moderate slowdown after strong year-over-year passenger traffic growth rates recorded in January (+6.9%) and February (+9.2%), passenger traffic continues to grow with airports worldwide reporting an increase in total passenger traffic by 5.7% for the month of March and 7.3% for the first quarter of 2016, with international traffic growing faster than the domestic component (+8.2% and +6.7% respectively on a year-to-date basis). Double-digit growth was observed only in the Middle East (+10.4%), while demand for air travel was depressed in Africa (-3.4%). Other regions showed moderate to strong growth: Europe (+7%), Asia-Pacific (+6.7%), Latin America-Caribbean (+4.1%) and North America (+3.9%).

Total passenger traffic has increased by more than 6% for the twelve-month period, testifying to the strong resilience of demand for air transport despite the observed volatility and uncertainty with respect to economic conditions in various parts of the world. The United States maintained momentum growing at 3.9% in March, while China as the second largest aviation market grew by 3.5%, mainly due to international traffic in Asia’s largest economic powerhouse (+13%). Consistent with previous months, passenger traffic growth in Asia continues to be highly stimulated by the buoyant air transport developments in India. This is reflected in the 19.1% growth during the month of March and 17.8% growth on a year-to-date basis for the country’s major airports. Japan remains almost flat at +0.9% with slight growth in international passenger traffic (+3.1%). In Europe, the three largest aviation markets, UK, Germany and Spain, grew by 7.7%, 4.6% and 14.6% respectively. Brazil and Russia are the only two major markets recording declines in total passenger traffic (-7.1% and -2.3% respectively) for major commercial airports, demonstrating the ongoing economic difficulties in the two BRICS constituents. With regard to Latin America and the Caribbean, the traffic decline in Brazil is offset by strong growth in Mexico (+11.7%) and Colombia (+9.5%). In Africa, the two largest markets of South Africa and Egypt are pulling the region in opposite directions. While South Africa grew strongly by 6.3%, Egypt lost almost a quarter of its passenger traffic (-24% year-over-year).

On the individual airport level, the air freight landscape in North America is mixed. While the major cargo hubs of Memphis (MEM) and Louisville (SDF) grew strongly by 12% and 11.4% respectively, other big freight airports posted declines: Anchorage (ANC, -3.8%), Los Angeles (LAX, -3.9%), Miami (MIA, -1.3%), Chicago-O’Hare (ORD, -13.5%) and New York (JFK, -6.7%). In Asia-Pacific, the picture is mixed as well; while some freight hubs recorded robust growth—Shanghai-Pudong (PVG, +5.7%), Singapore (SIN, +5.2%), Beijing (PEK, +6%), Guangzhou (CAN, +14.3%) and Delhi (DEL, +17.5%)—several airports experienced air freight declines, including Seoul (ICN, -4%), Tokyo-Narita (NRT, -10.3%), Taipei (TPE, -3.5%) and Bangkok (BKK, -1.4%). This slowdown in air freight in both North America and Asia-Pacific is symptomatic with respect to increased transpacific air freight traffic a year ago, resulting from the disruptions of US west coast sea ports. This distortion plays a role in the decline at some of the key airports in the first quarter of 2016.

In Europe, out of four major air freight hubs, two airports reported traffic declines—Frankfurt (FRA, -2%) and London-Heathrow (LHR, -3.8%)—whereas the other two—Paris (CDG) and Amsterdam (AMS)—showed growth of 3.6% and 0.5% respectively, reflected in a 0.3% growth rate for the region as a whole. While air freight in Istanbul (IST) declined by 14.2% year-over-year, Brussels (BRU), affected by the terrorist attacks of 22 March, contracted by 22.4%.

Latin America-Caribbean is the only region plunging into negative territory with respect to air freight volumes during the month of March (-3.8%). While air freight declines are apparent at airports in Brazil such as Sao Paulo (GRU, -11.3%), other major air freight hubs recorded substantial declines in air freight as well, including Bogota (BOG, -5.1%), Lima (LIM, -13.4%) and San Juan (SJU, -5.1%).

The Middle East, which was outperforming all other regions with respect to air freight growth over the last year, shows moderation in air freight traffic development. Dubai International (DXB) and Dubai World Central (DWC) were flat at 0.1% and -0.8% respectively. The slowdown was even more pronounced at Abu Dhabi (AUH, -5.9%), which yielded the palm of growth to Doha (DOH, +18.7%). The region as a whole, however, still outperforms all other parts of the world in terms of air freight growth on both year-to-date and year-end bases (+4.4% and +8.1% respectively).

In Africa, the air freight picture is mixed as well: while Casablanca (CMN) and Dakar (DKR) grew by 3.8% and 19.4% respectively, Johannesburg (JNB) remained flat at 0.6%, and Nairobi (NBO) reported air freight declines of 6.4%.

Passenger air traffic, even taking into account the moderate slowdown after two months of high growth, is significantly stronger as compared to air freight, where industry-wide capacity growth is in collision with falling demand. Global trade growth remains subdued, while international tourism is on the rise. 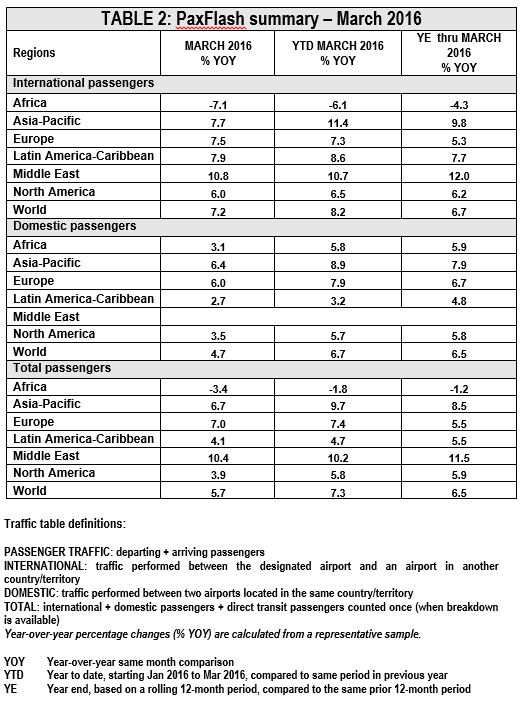