Accelerated growth in passenger traffic of over 9%; air freight volumes down by 4.1% affected by the timing of Chinese New Year and the disruption of the US west coast sea ports a year ago

Montréal, 14 April 2016 – Global passenger traffic (+9.2%) continued to grow in both international and domestic sectors (+9.8% and +8.9% respectively) in the month of February. February traffic was affected by the leap year month and the timing of the Chinese New Year, which introduced a distortionary effect on year-over-year growth as compared to the previous year. Nevertheless, Asia-Pacific, the Middle East and Europe have been the major contributors to this growth, with a year-over-year increase of over 10% in total passenger traffic (+11%, +10.5% and +10.1% respectively). North America, the most mature aviation market, posted a robust total passenger traffic growth rate of 8.4% given ongoing strong fundamentals across the region’s aviation sector. Latin America-Caribbean’s total passenger traffic grew moderately by 4.5%, although the largest country in the region, Brazil, continues to experience economic malaise. Africa remains in a fragile state with a marginal growth rate of 0.3%, with declining international traffic for nine consecutive months and the first positive growth rate in total passenger traffic in the last seven months.

At the individual country level, India continues to outperform all other major passenger markets with strong total passenger growth of 18.4% for its major commercial airports (+22.6% in domestic traffic and +8.4% in international). The US, China, Japan, Germany and the United Kingdom all posted growth between +6% and +8%. Other important country markets demonstrating double-digit growth rates in total passenger traffic at major hubs and tourist destinations include Spain (+16.2%), Thailand (+16.4%), Korea (+15.3%), Turkey (+12%), Mexico (+13%) and Indonesia (+15.5%). Brazil is the only passenger market posting a total passenger traffic decline of 3.4% for its major airports.

Air freight growth rates reveals an entirely different story. At the global level air freight volumes declined by 4.1% as compared to the previous year, with international freight experiencing a greater decline than domestic freight (-5.5% and -0.8% respectively). While there is some cause for concern, much of the decline is attributed to the timing of the Chinese New Year (19 February in 2015 versus 8 February in 2016; this difference of 11 days affects global imports and exports). As a result, Hong Kong (HKG), Shanghai-Pudong (PVG), Seoul-Incheon (ICN), Tokyo-Narita (NRT) and Taipei (TPE) reported traffic losses of 14.9%, 13.1%, 9.4%, 16% and 18.2% respectively. However, some major freight hubs remained in positive territory, including Dubai (DXB, +2.9%), Paris-Charles de Gaulle (CDG, +9.9%), Doha (DOH, +20.8%) and London-Heathrow (LHR, +2.7%). Based on the global sample of airports, 16 of the top 20 airports in terms of freight volume all experienced year-over-year declines for the month of February, including Memphis (MEM) and Louisville (SDF), the two major freight hubs in the US; Miami (MIA); Frankfurt (FRA); Singapore (SIN); Los Angeles (LAX); and others.

The picture is thus two-sided: As all major air freight markets in East Asia experienced declines in traffic volumes, the major air freight markets in Europe remained flat or grew only marginally. At the regional level, Asia-Pacific and North America are the only regions with significant and comparable rates in air freight declines (-8.1% and -7.3%), testifying to the pattern of international trade and economic interdependence of the two regions. At the same time, the short term distortionary boost to freight volumes a year ago during the West Coast Sea port crisis has exacerbated the decline in February. 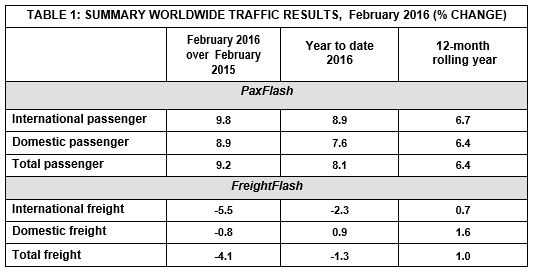 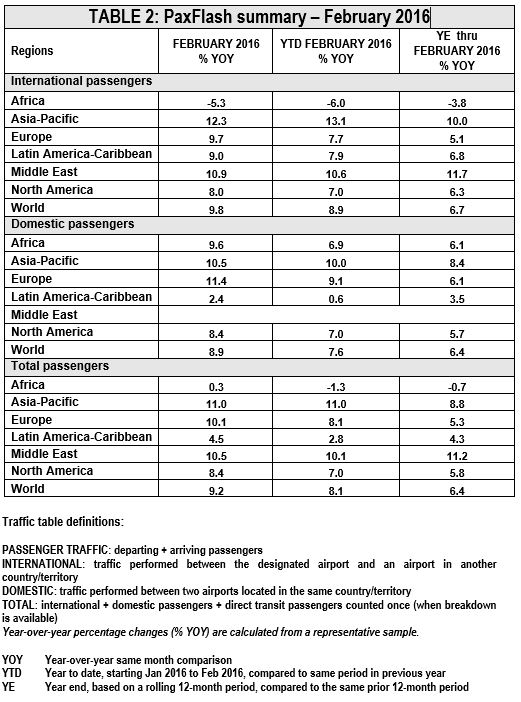 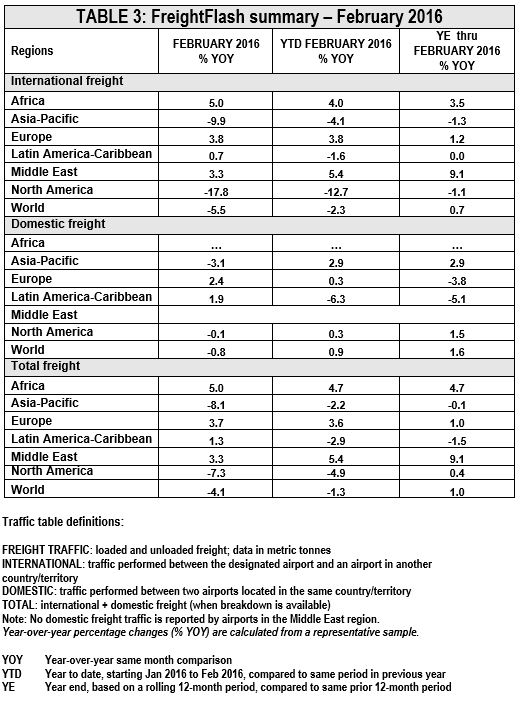