Montréal, 15 March 2016 – Strong traffic growth at the end of 2015 has continued into January 2016, with overall passenger traffic growing by 6.9% compared to the same month last year. The plunge in global oil prices coincided with a rapid fall in global inflation expectations, in addition to a much slower pace of economic growth in China and the rest of the major emerging markets. Nevertheless, when compared to more mature markets, many emerging market economies performed well, thereby stimulating growth in passenger traffic. Chief among these markets is India, with a projected annual GDP growth of over 7.5% for the next five years, and the US, with projected economic growth of 2.8% for 2016. And despite a slowdown in China, it should be noted that the country is expected to maintain economic growth in the realm of 6% over the next five years. Europe’s economic prospects remain largely uncertain, with low projected growth rates of 1.6%, 2.2%, 1.5% and 1.3% for Germany, the United Kingdom, France and Italy respectively.

During the first month of 2016, Africa experienced a decline in total passenger traffic of 3.2%. The two largest passenger markets, South Africa and Egypt, are pulling the regional figure in opposite directions; while South Africa grew by 11.6%, Egypt lost over a quarter of its traffic as compared to January 2015.

In Europe the year started with a 5.8% increase in total passenger traffic. While Germany and the United Kingdom grew by 4.6% and 4.7% respectively, major commercial airports in Spain demonstrated stronger growth of 12.4%. Turkey and Italy (+6.5% and +4.5%) were performing better than France (+1.7%), and Russia posted a traffic loss of 3.1%.

In the Latin America-Caribbean region, total passenger traffic grew by a modest 2.4% during the first month of 2016. At the individual country level, the results are mixed; while Brazil experienced a passenger traffic decline of 7.1% at its major airports, the other two major passenger markets—Mexico and Colombia—grew by 11.4% and 9% respectively. These results are consistent with the trend observed at the end of 2015. The three largest airports in the region—Sao Paulo (GRU, -3.8%), Mexico City (MEX, +10.2%) and Bogota (BOG, +6%)—saw mixed results.

In an environment of continued uncertainty in the global economy and weakened commodity prices, air freight volumes continue to maintain momentum in January with an overall increase of 1.5%.

Most of the regions showed improvements, with the Middle East in the lead (+7.4%), followed by Africa (3.7%), Europe (3.5%) and Asia Pacific (3.3%). On the other hand, freight traffic dropped by 2.8% and 4.7% in North America and Latin America-Caribbean regions respectively.

In Africa, total freight traffic increased by 3.7%, while domestic freight increased by 3.0% and international freight went up by 2.1%. The three major freight players in the region—Egypt, South Africa and Kenya—showed varying results of +1.2%, +4.8% and -6.6% respectively where total freight is concerned, with Kenya registering a 6.3% decline in international freight. At the individual country level, air freight traffic in Africa is volatile, which stems from the combination of small volumes, turbulence in the commodity markets and a multitude of external shocks.

Eight out of the ten largest freight hubs reported freight volume growth with the exception of Taoyuan (TPE) and Narita (NRT), which stayed in negative territory in January with respective declines of 5.2% and 3.9%.

In Europe, total air freight grew by 3.5%, whereas domestic freight declined by 2% and international freight increased by 3.9%. While total air freight in Germany grew by a marginal 0.9%, the Netherlands, France and the United Kingdom showed better results (+4.7%, +3.7% and +3.5% respectively).

At the individual airport level, the results for the five largest cargo hubs are mainly positive. While FRA was the only airport that reported a slight decline of -0.3%, CDG, Amsterdam (AMS), LHR and Leipzig (LEJ) posted 4.5%, 4.7%, 2.9% and 5.3% growth respectively.

The negative trend in freight traffic continues in the Latin America-Caribbean region with a drop of almost 5% for the month of January 2016 due to Brazil’s struggling economy. The country’s tremendous drop in freight volumes of 19% (which comprises declines in both domestic and international freight of 25% and 14% respectively) far exceeded the gains in the Colombian and Mexican markets (6.2% and 6% respectively). At the individual airport level, the busiest cargo hubs of the region—BOG (+4.9%), MEX (+11.5%) and GRU (-11.9%)—showed varying results. Air freight traffic losses were also recorded in Peru (-1.1%), Puerto Rico (-11.1%), Argentina (-28.7%) and Costa Rica (-10.9%).

In North America, air freight declined by 2.8% in the month of January as compared to the previous year, which is the result of a significant drop international freight (-8%) and domestic freight being almost flat (+0.8%). 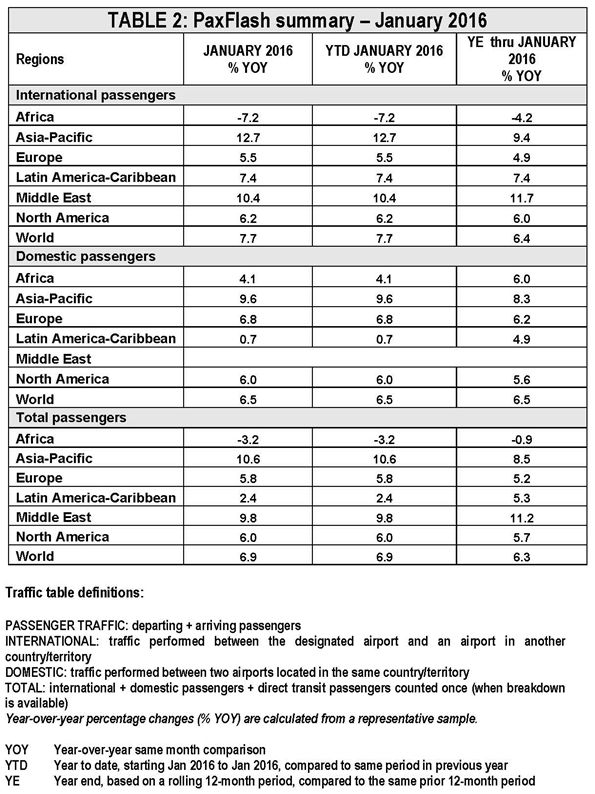 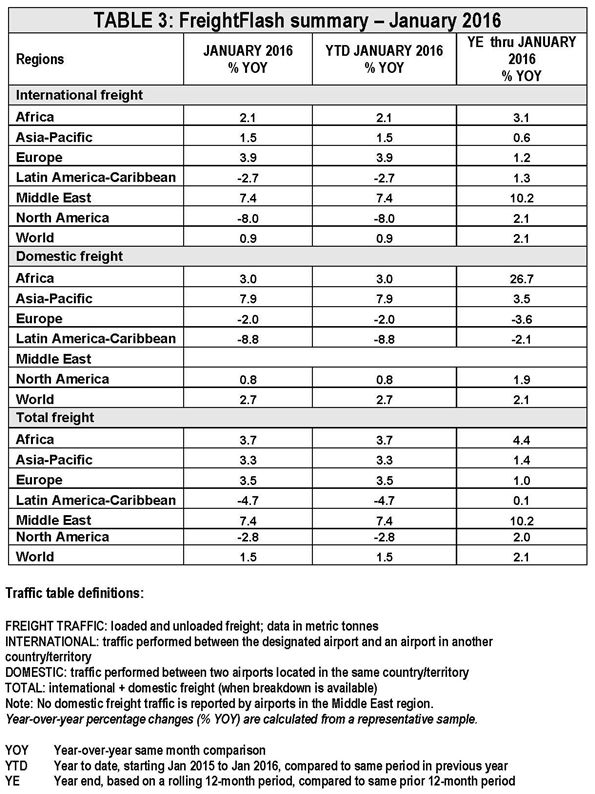