Preliminary data points to growth of over 6% in accumulated passenger traffic for 2015; air freight volumes in positive territory

Except for Africa (-0.1%), all regions posted strong positive growth rates in passenger volumes, ranging from 5% (Europe) to 11.3% (Middle East).

Air freight markets were substantially weaker as compared to the passenger figures, coming to the finish line with a modest 2.3% growth in total freight largely due to subdued growth in emerging markets and developing economies, along with a more modest recovery in advanced economies. This growth is comprised of +2.5% in international freight and +1.8% in domestic freight on an annualized basis. The faster-than-expected slowdown in Chinese imports and exports reflects weaker capital investment and manufacturing activity, which were key drivers for global economy over the last two decades.

Even though all regions remained in positive territory where air freight growth is concerned, only the Middle East demonstrated a strong increase of 10.7% in 2015, whilst all other regions grew only marginally.

In Africa, passenger traffic declined by 0.4% in the sole month of December and by 0.1% from January to December. Even though the region has been recovering from Ebola, the growth was negatively impacted by the disruption of air traffic in Egypt and major traffic declines between Tunisia and some of the key foreign visitor markets following violent terrorist attacks over the course of the year. From January to December 2015, passenger traffic in Tunisia’s airports declined over 30%. Other countries reporting significant traffic losses were Burkina Faso (-12.6%), Nigeria (-8.9%) and Madagascar (-5.2%). South Africa and Algeria finished the year with strong positive 6.8% and 6.6% growth rates respectively, whilst Morocco saw a 2.6% increase in passenger volumes.

In Asia-Pacific, passenger traffic grew by 8.1% in the month of December, in line with the 8% increase on an annualized basis. China and India remain the major driving forces in the robust air passenger growth in the region (+8% and +16.4% respectively). Importantly, India’s accelerated economic activity saw the country approaching China last year in its contribution to the growth of total passengers in the region; in fact, India even surpassed China in domestic passenger traffic growth. In short, half of the growth in passenger traffic in Asia-Pacific comes from these two giants. Other major contributors to the region’s strong passenger growth are Thailand (+21.2%), Korea (+10.7%), Hong Kong (+8.3%) and Japan (+4%). Of all major countries, Indonesia was the only one ending the year with a passenger traffic loss of 1.2%.

In the sole month of December 2015, Europe grew by 5.1% in terms of total passengers, which is consistent with a 5% growth from January to December during the same year. Domestic passenger traffic outperformed international traffic by 0.4 percentage points (+5.2% versus +4.8%), driven largely by strong domestic passenger traffic growth in Turkey (+13.4%), Russian Federation (+8.2%), Spain (+6.2%) and Greece (+20.6%). With regard to international traffic for the twelve months of 2015, half of the growth came from the four key markets of Spain (+5.9%), Germany (+4.6%), United Kingdom (+4.5%) and Italy (+7.3%). Russia lost 15% of international traffic as compared to the previous year—the result of low oil prices, domestic structural weaknesses and sanctions. With regard to total passenger traffic, Ireland and Portugal finished the year with strong 13.2% and 11% growth respectively, while France—the third largest economy of Europe—grew by a modest 2.8% given weak economic conditions in the country.

The top airports in terms of growth in the region are Istanbul-Atatürk (IST, +5.2 million), Madrid (MAD, +5 million), Istanbul-Sabiha Gökçen (SAW, +4.7 million), Dublin (DUB, +3.3 million) and Amsterdam (AMS, +3.3 million). The two airports in Istanbul combined grew by 12.2%, generating an additional 9.8 million passengers over the course of the year, making the Eurasian transcontinental city the third largest aviation city in Europe after London and Paris.

In the Latin America-Caribbean region, total passenger growth for the twelve months amounted to 5.5%. This is the result of strong growth in both international (+7.4%) and domestic (+5.2%) passenger traffic despite the recession in Brazil and the economic problems in other countries in the region.

The leading aviation markets of the United Arab Emirates, Qatar and Oman reported double-digit growth rates in total passenger traffic figures—11%, 17.1% and 17.3% respectively. Saudi Arabia grew by a modest 2.5%, with domestic traffic going into negative territory (-0.1%) and international passenger traffic growing by only 4.2%, the result of a weaker economy due to lower oil prices.

The three major aviation hubs of the region reported impressive growth on an annualized basis: Dubai (DXB, +7.5 million), Doha (+4.5 million) and Abu Dhabi (AUH, +3.4 million). In total, the three airports generated an additional 15.5 million passengers in the region over the course of the year.

Passenger traffic in North America grew by 4.9% in the sole month of December 2015, slightly below the year-end figure of 5.6%. Over the course of the year, international passenger traffic saw an increase of 6.1%, whilst domestic traffic grew by 5.5%, testament to the resilient US recovery and the appreciating US dollar vis-à-vis the basket of other major currencies. Canada, dependent on oil exports and transborder traffic, however, achieved only 3.7% growth in total passenger traffic.

Total freight traffic in Africa increased by 1.7% in December as compared to the previous year and by 3.2% during the twelve months of 2015. On a country-by-country basis the results were mixed: even though the major air freight markets of South Africa and Egypt grew by 11.3% and 6% respectively in 2015, a number of countries reported air freight declines, including Kenya (-5.1%) and Nigeria (-2.6%).

Geopolitical risks in Northern Africa coupled with lower commodity prices and high borrowing costs weighed heavily on several African economies, even though most countries are expected to see a gradual pickup of growth in the coming years.

Even though air freight in Europe grew by 2.8% in the sole month of December 2015, this performance was well above the growth rate for the full year: 0.7% due to weak growth of 0.9% in international freight and a 3.9% decline in domestic freight. The largest European air freight markets of Germany, France and the Netherlands saw declines in air freight volumes of 0.2%, 0.5% and 0.7% respectively, whilst United Kingdom remained flat at 0.2%. The marginal growth at the regional level was achieved with the help of Belgium, Italy, Luxembourg and Turkey, growing by 8.6%, 5%, 4.2% and 3.5% respectively.

Latin America-Caribbean was the only region that dipped into negative territory in terms of air freight (-0.4%) in the month of December. The performance was symptomatic of weak freight growth for the twelve months of the year (1.2%). The region saw marginal growth in international freight (+2.2%) and a 1% decline in domestic freight over the course of the year. Brazil—the largest air freight market in the region—experienced a major decline in air freight traffic of 9.1%, with the decline in domestic freight being more pronounced than in international freight (-15.2% versus -3.8% respectively). At the same time, Colombia (+4.9%) and Mexico (+7.8%) kept their momentum as the key air freight growth drivers in the region. Similar growth rates in domestic air freight were achieved in the two countries (10.2% and 10.8% respectively), but a higher growth rate in international freight was seen in Mexico (6.5% versus 2.4% in Colombia).

The results for other significant air freight players in the region are varied: while Peru and Argentina reported air freight declines (-1.2% and -8.1% respectively), Ecuador boasted solid 8.3% growth.

Middle Eastern airports posted an outstanding 9.1% growth in air freight for the sole month of December and 10.7% growth on an annualized basis, which is over five times greater than the global growth rate. In nine out of twelve months over the course of the year, the Middle East outstripped all other regions in international freight growth, and in ten out of twelve months the region outperformed the rest of the world in total freight. At the country level, the United Arab Emirates reported a 4.4% growth in international and total air freight, while the second largest air freight market, Qatar, reported impressive growth of 47.3% in total freight. Over the course of the year, Doha (DOH) added an additional 463,000 tonnes of air freight, which represents an average of nearly 39,000 additional tonnes of air freight every month. Put differently, this impressive growth is equivalent to an additional 340 movements of a Boeing 747-400 Freighter at maximum revenue payload every month.

North America, the second largest air freight market after Asia-Pacific, reported a 1.4% growth in air freight for the month of December and 2.4% for the full year. A number of airports reported substantial increases in air freight volumes on an annualized basis, including Chicago-O`Hare (ORD, +163,000 tonnes), Anchorage (ANC, + 132,000 tonnes), Los Angeles (LAX, + 98,000 tonnes) and Cincinnati (CVG, + 74,000 tonnes). Houston (IAH) lost 33,000 tonnes of air freight as compared to the previous year.

With regard to Memphis (MEM) and Louisville (SDF), the two major cargo hubs in the region, both reported growth of 0.9% and 1.9% respectively. 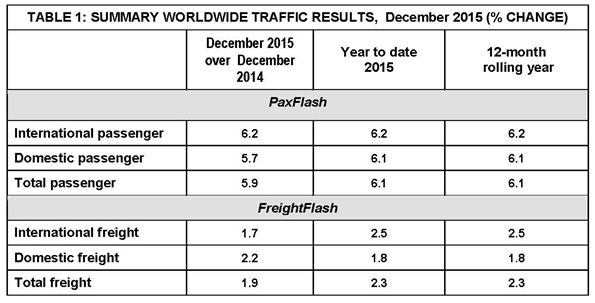 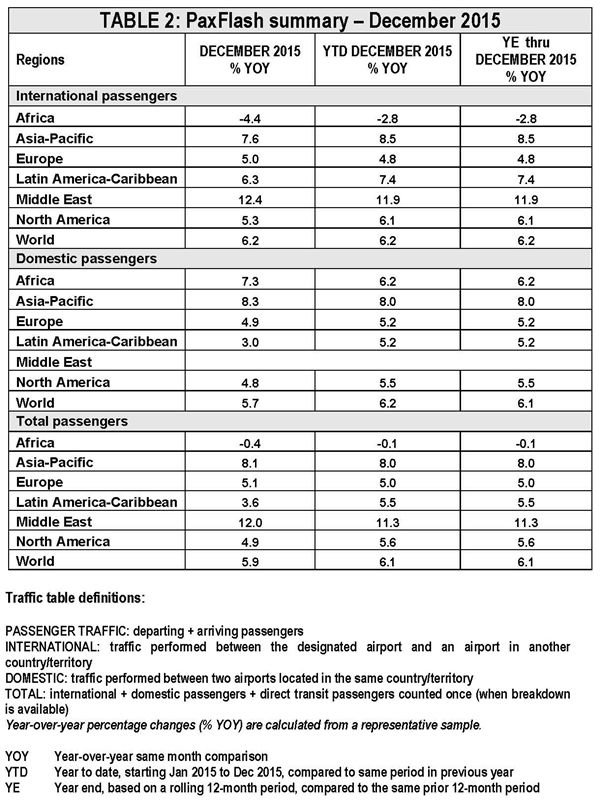 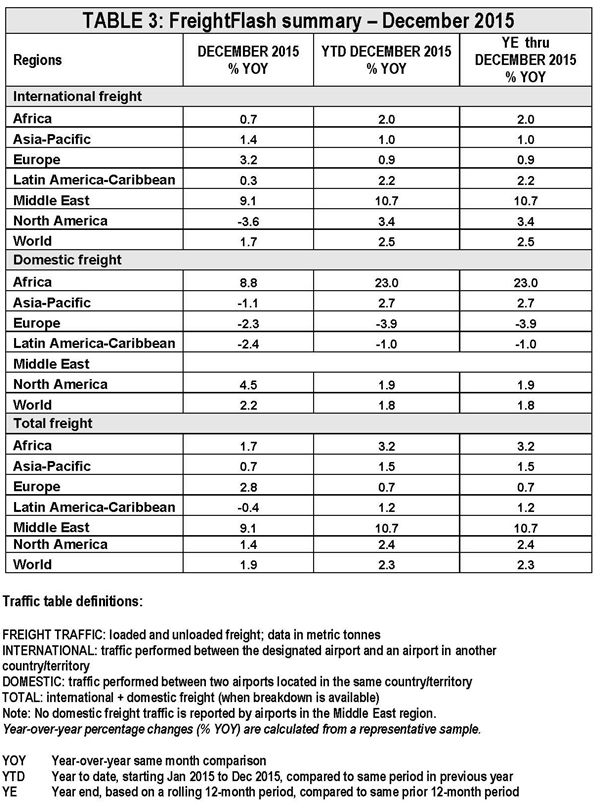