Accumulated passenger traffic grows by over 6% for eleven months; 1.3% decline in air freight volumes for November 2015

Montréal, 13 January 2016 – On a year-to-date basis up to November, global passenger traffic has risen by 6.2% as compared to the previous year at the world’s major airports. For the sole month of November, passenger traffic increased by 6.3% year over year.

International and domestic traffic posted growth rates of 6.1% and 6.5% respectively for the same month. In an environment of lower fares and dropping oil prices, global air travel continues to record robust year-over-year growth above the three-year growth trend.

The Middle East continues to lead growth in international passenger traffic (+11.3%), followed by Asia-Pacific and Latin America-Caribbean, both growing by 8.2%. In contrast, airports in Africa saw international passenger traffic contract by 9.2%, testifying to the volatility of the region. The two key tourist airports in Egypt, Hurghada (HRG) and Sharm El Sheikh (SSH), reported international traffic losses of 33% and 58% respectively as compared to the previous year. This was aggravated by a decline of 8.4% at Marrakech (RAK), a major Moroccan airport.

With regard to the two most mature air transport markets, North America continues to outperform European growth in both international and domestic passenger traffic, posting gains of 7.2% and 9.2% versus 4.8% and 3% in Europe. Los Angeles (LAX), Atlanta (ATL), San Francisco (SFO) and Houston (IAH) reported strong double-digit growth in international passenger traffic of 11.4%, 15.9%, 14.1% and 14.2% respectively. Strong economic fundamentals coupled with a boost in holiday travel are the reasons for the robust growth rates.

In November 2015, Latin America-Caribbean recorded moderate growth of 3.3% in passenger traffic. Growth rates are mixed across the region, where passenger traffic declined in Brazil by 4.9%. This is counterbalanced with strong traffic growth in Mexico (+13.2%) and Colombia (+10.8%).

In contrast to passenger traffic, global air freight markets show volumes in decline by 1.3% in November 2015, thereby removing the optimism from the first half of the year. In the last four months, air freight plunged into the negative territory twice—in August (-0.4%) and in November (-1.3%). This reflects the slowdown of the Chinese economy and uncertainty in the commodity exporting countries. Out of ten largest freight markets, seven reported freight declines in November. Weak freight growth in China and India (+2.1% and +3.2% respectively) was not enough to offset freight declines in the major markets, including the US (-1.9%), Japan (-3.7%), Hong Kong (-3.1%), Germany (-2.0%) and Korea (-2.7%).

Weak freight traffic growth is most pronounced in Latin America-Caribbean, with Brazil posting an alarming 17.6% freight volume decline in November and a 9% decline on a year-to-date basis.

In Europe, the results for the four largest cargo hubs are mixed. While Frankfurt (FRA) and London-Heathrow (LHR) reported freight declines of 4.3% and 3.1% respectively, Paris-Charles de Gaulle (CDG) and Amsterdam (AMS) posted modest 3.1% and 1.3% growth respectively.

A similar picture is observed in Asia-Pacific, where seven out of the ten largest freight hubs reported freight volume declines with the exception of Beijing (PEK), Singapore (SIN) and Guangzhou (CAN), which stayed in the positive territory with modest 2.8%, 2.6% and 4.7% growth rates respectively for the month of November.

In North America, the freight traffic slowdown is most pronounced at Anchorage (ANC), Chicago-O’Hare (ORD) and New York (JFK), with the airports posting declines of 5.1%, 8.3% and 10.4% respectively. The two major freight hubs, Memphis (MEM) and Louisville (SDF), reported slight declines as well—drops of 0.9% and 0.2% respectively. 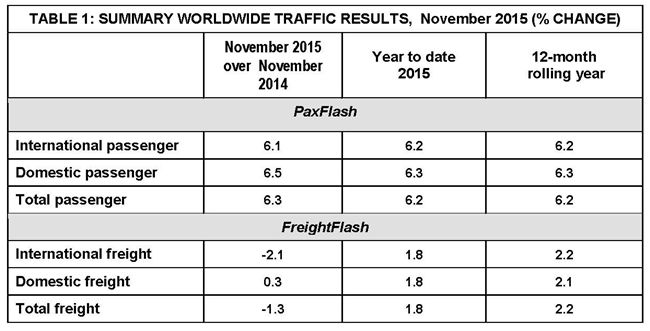 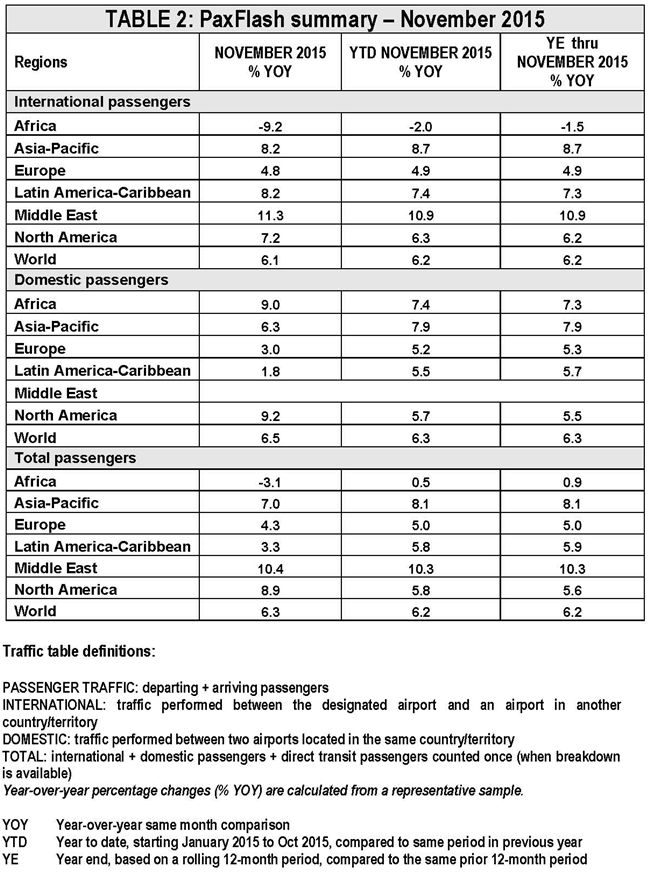 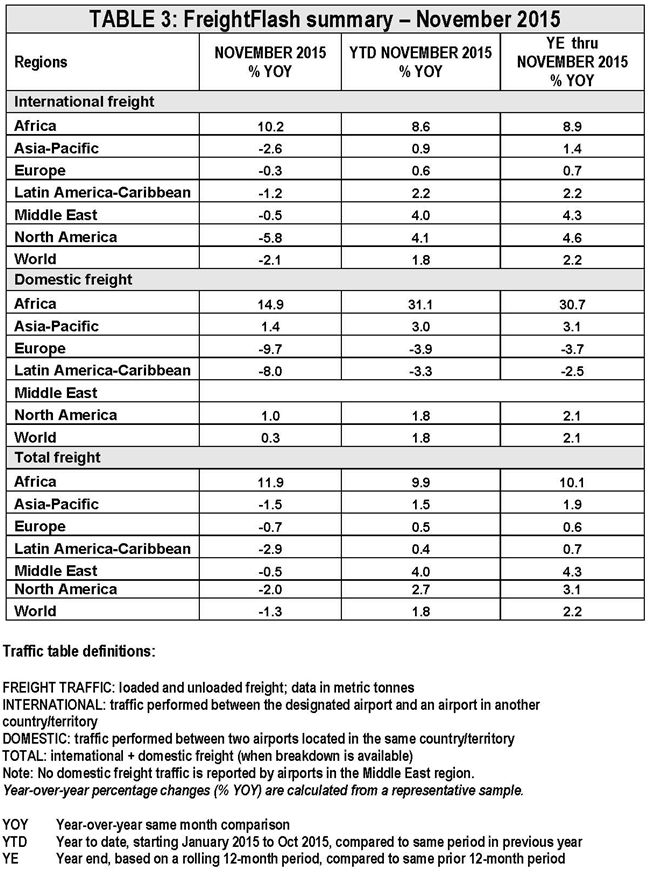 1.  Airports Council International (ACI), the only worldwide association of airports, has 591 member airport authorities, which operate 1,861 airports in 177 countries. ACI’s mission is to promote professional excellence in airport management and operations, and this mandate is carried out through the organization’s multiple training opportunities, as well as the customer service benchmarking programme, a wide range of conferences, industry statistical products and best practice publications.

2.  PaxFlash and FreightFlash statistics are based on a significant sample of airports that provide regular monthly reports to ACI. They represent approximately 60% of total passenger traffic and 70% of total freight traffic worldwide. Commentary, tables and charts are based on preliminary data submitted by participating airports and are therefore subject to change.