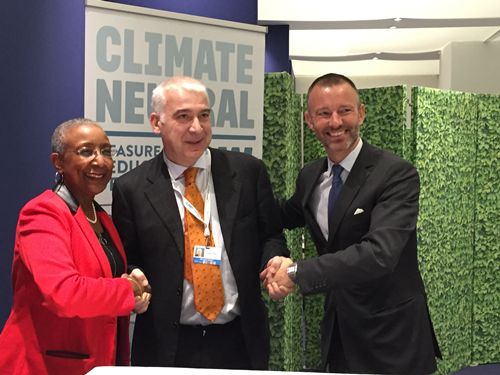 The partnership agreement commits ACI to supporting the UNFCCC’s ‘Climate Neutral Now’ campaign, while the UNFCCC will support airport climate action at airports, with a particular focus on carbon management by airports through Airport Carbon Accreditation.*

The organisations also agree to develop a common work programme and communications plan promoting carbon neutrality at airports. This will see the UNFCCC supporting Airport Carbon Accreditation and associated climate actions by airports. The agreement aims to increase the number of airports progressing to Level 3 (optimisation) and Level 3+ (carbon neutrality) of the programme. The UNFCCC will join the independent Advisory Board¹ of Airport Carbon Accreditation, thereby providing valuable input into the strategy and future orientation of the programme.

In the past twelve months, Airport Carbon Accredited status has been earned by a total of 137 airports worldwide, representing 31% of global passenger traffic. There are currently 20 carbon neutral airports – all of which are in Europe. This new partnership with the UNFCCC follows a commitment by the European airport industry last week at COP21 to increase the number of carbon neutral airports to 50 by 2030.

Angela Gittens, Director General ACI WORLD and Olivier Jankovec, Director General ACI EUROPE commented “This is a very big moment for ACI and Airport Carbon Accreditation. To gain the support of an organisation as authoritative as the UNFCCC is something we consider a major achievement and a genuine recognition of the contribution of the airport industry to the climate action through Airport Carbon Accreditation. We are delighted to be partnering with UNFCCC and look forward to their input in the Advisory Board of the programme.”

John Kilani, Director, Sustainable Development Mechanisms programme, UNFCCC secretariat said “It is immensely encouraging to see an industry as visible and strategically relevant as the airport industry being so proactive on climate action. What ACI has achieved through Airport Carbon Accreditation over the past 6 years is inspiring – to mobilise 137 airports in the journey towards carbon neutrality is an example that many other industries could learn from. We count on their support for our Climate Neutral Now campaign and look forward to working with them through this new partnership.”

To find out more about the Airport Carbon Accreditation programme, including the key results for Year 6 (June 2014 to May 2015), visit the interactive microsite at www.airportCO2.org.

The IPCC (Intergovernmental Panel on Climate Change) has estimated that aviation’s total CO2 emissions account for 2% of global emissions’ impact on climate change. Of that figure, airports’ own operations only account for up to 5%, but airports are keen to tackle their greenhouse gas emissions – several individual airports operators having already committed to becoming carbon neutral in the past few years with some having already achieved this.

In 2007, the global airport industry committed to reduce its carbon emissions, in a special resolution passed at the ACI WORLD Annual Congress & Assembly.

To find out which airports are certified & their level of certification, visit: http://www.airportcarbonaccreditation.org/airport/participants.html