“Passenger traffic remained resilient in the face of the global uncertainties that beleaguered many economies in 2013 and 2014,” said Angela Gittens, Director General of ACI World. “International tourism, in particular, was irrepressible in 2014 considering the geopolitical risks that have persisted in certain parts of the world, such as Eastern Europe and the Middle East. The Ebola outbreak also presented significant challenges to the aviation sector. Notwithstanding, by and large, the international traveller in 2014 appears to have been immune to these potential dangers. Overall global passenger traffic grew at a rate of over 5%. This is above the 4.3% average annual growth rate in passenger traffic from 2004 to 2014.

“Despite the uneven recovery in the global economy, there was a net increase in global demand for foreign goods and commodities in 2014,” Gittens continued. “The overall flow of exports and imports by sea, land and air, measured by world trade volumes in goods and services, has grown. The American economic rebound and the rise in consumer spending helped stimulate major exporters of high-tech goods such as tablets, laptops and mobile phones. This helped awaken the air cargo market in the last quarter of 2013 and into 2014 after several years of sluggish growth.

“In previous years there was a marked divergence in growth between airports located in emerging markets and those in advanced economies. That is, the mature markets of North America and Europe experienced modest growth levels whereas the major emerging economies such as BRICS (Brazil, Russia, India, China and South Africa) posted significant gains year after year. However, Europe and North America have rebounded in 2014, which resulted in a form of convergence in growth rates across the regions,” she added.

“Irrespective of the short-run changes in the business cycle, long-term growth prospects in air transport demand will continue to come from emerging markets,” Gittens noted. “This is largely because of the demography of these markets—most of the world’s population resides in emerging markets and developing economies. Liberalization of air transport, sizeable population bases and rapid rises in per-capita incomes in these markets are the main economic engines driving this phenomenon.

“Given the dynamic character of the airport industry, having a reliable data source to count on is more important than ever,” Gittens concluded. “ACI continues to deliver the most comprehensive airport traffic data and rankings in an internationally comparable format to provide our members and the wider aviation and financial industry a global view of the airport industry as a whole.”

Preliminary airport traffic results for the first half of 2015 show encouraging signs of steady growth in the global passenger and cargo markets. The overall passenger growth rate in the first six months of 2014 was in the order of 5%, which is slightly above the equivalent year-over-year figure from 2014. Although the rate of growth in air cargo markets has slowed compared to 2014, air cargo is estimated to have grown by over 3% for the first half of 2014 as compared to the previous year.

¹Please note that data is based on information as of August 2015. The actual World Airport Traffic Report may contain updated and/or revised figures upon publication in September 2015. 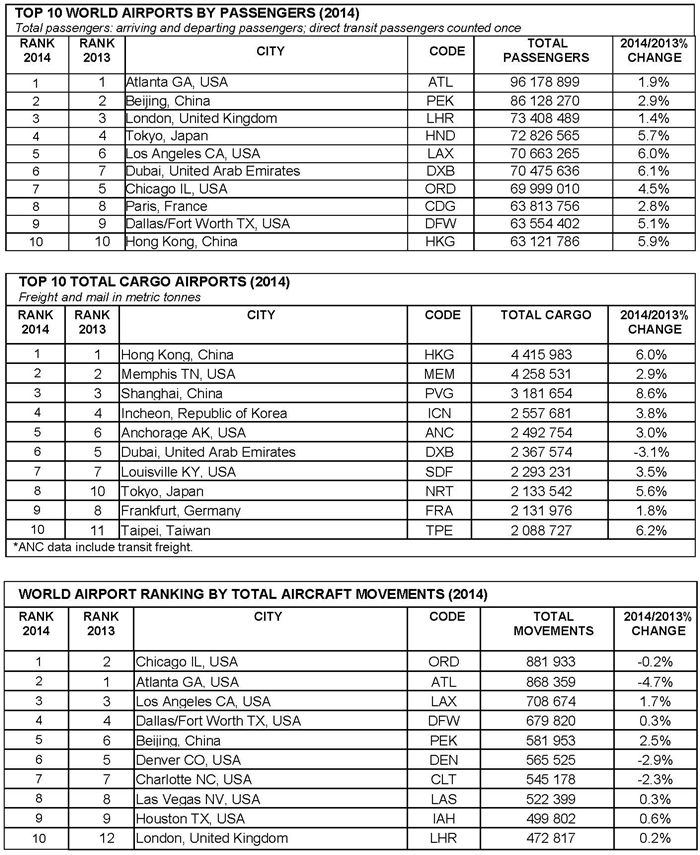