Montréal, 10 April 2015 – Global passenger traffic increased by over 6% for the month of February, with much of the growth stemming from international travel, which grew by 7.3%. While all regions reported gains in passenger traffic, most of the buoyant activity stemmed from the Asia-Pacific region, with gains of 11.6% in international passenger traffic for the month of February. Many of the busiest airports in the region posted double-digit growth for the month. The seasonal factor of the Lunar New Year taking place in February 2015, as compared with January 2014, is responsible for some of the distortion in year-over-year traffic results.

With many retailers seeking alternate modes of delivery due to the congestion at sea ports along the western coast of the United States, air freight received a significant boost to volumes for the month of February. Anchorage (ANC), Chicago (ORD) and Los Angeles (LAX) experienced impressive growth of 47.6%, 47.8% and 21.9% respectively. Given that many Asia-Pacific airports act as net exporters of air freight with North American airports as net importers, growth in international freight traffic for each region was 17.3% and 26.9% respectively. Overall, air freight volumes grew 10% for the world as a whole in February as compared to the previous year.

“Regardless of these short term distortions, we have seen continued strong growth month after month in 2014 and into 2015 on a consistent basis,” Echevarne continued. “Both passenger and air freight traffic are dancing to the beat of their own drum in the face of on-going concerns of a global slowdown. That being said, with reduced growth expectations in output in emerging markets, we have yet to see the impact this will have on airport traffic in the coming months.” 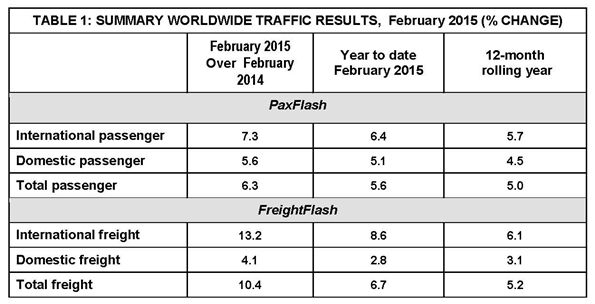