Click here for the PDF version of this media release »

Montreal, 26 March 2015 – Based on reports from 1,095 airports worldwide, ACI’s preliminary passenger traffic results for 2014 show that the top four ranked positions with respect to the world’s busiest airports in overall passenger traffic have not changed as compared to 2013. Atlanta (+1.9%) continues to be the world’s busiest airport with over 96 million passengers in 2014. While Beijing (+2.9%) was expected to close the gap, it no longer has double digit-growth as in previous years, placing it in second position. London-Heathrow (+1.4%) remains in third while Tokyo-Haneda (+5.7%) preserves fourth position. However, Los Angeles (+6%) and Dubai (+6.1%) have moved ahead of Chicago-O’Hare (+4.6%), occupying the fifth and sixth rank respectively.

Istanbul (+10.7%) remains one of the fastest growing airports among the world’s top 20 airports for passenger traffic, moving from 18th to 13th rank ahead of Amsterdam (+4.6%).

Chicago-O’Hare (-0.2%) has become the world’s busiest airport for aircraft movements following a drop in movements at the second ranked Atlanta (-4.7%) in 2014. Los Angeles (+1.7%) and Dallas/Fort Worth (+0.3%) maintain the third and fourth ranked position respectively. Beijing (+2.5%) moves ahead of Denver (-2.9%). For more detailed information on the preliminary 2014 rankings, please see Tables 1–5 below.

ACI World’s Economics Director Rafael Echevarne commented: “The airport that continued to make its mark in 2014 was Dubai International. The airport has solidified its status as the world’s major international connecting hub. Dubai is the fulcrum that connects long-haul international flights from east and west, north and south. That being said, it’s sister airport, Dubai World Central, under the same Dubai Airports organization, is poised to surpass these feats by becoming the world’s largest global gateway with capacity of more than 160 million passengers per year and a multi-modal logistics hub for 12 million tonnes of air cargo. Since the commencement of its operations, the airport has already moved up to the 29th busiest air cargo airport in the world handling almost 760,000 metric tonnes of cargo in 2014. With its astonishing capacity and growth, aviation’s nucleus certainly has moved eastward.”

Summary: Preliminary results for 2014 as compared to 2013

* Please note that all figures and percentages are extrapolations based on summed monthly data submissions by the world’s major commercial airports (1095 airports). The final confirmed report will be published in summer 2015 and will include 1800+ airports. As a result, figures are subject to variation 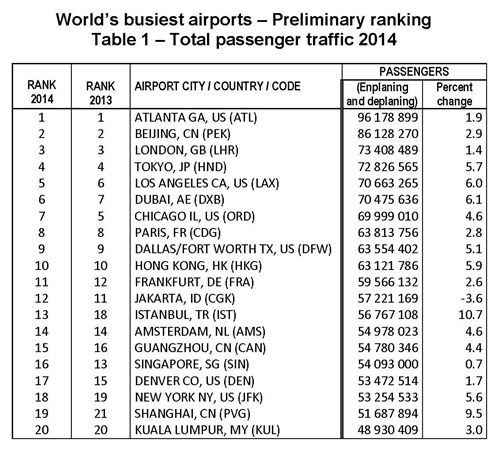 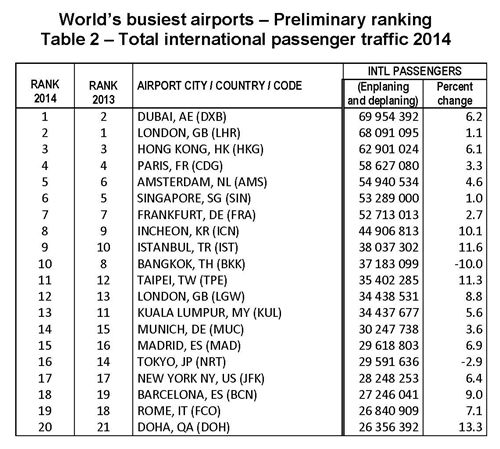 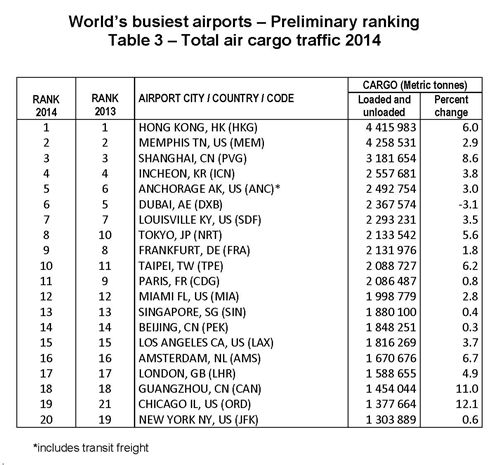 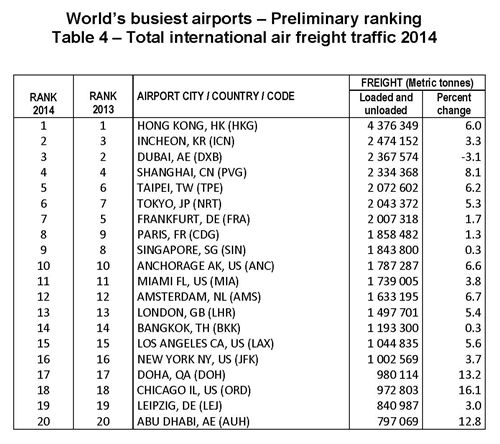 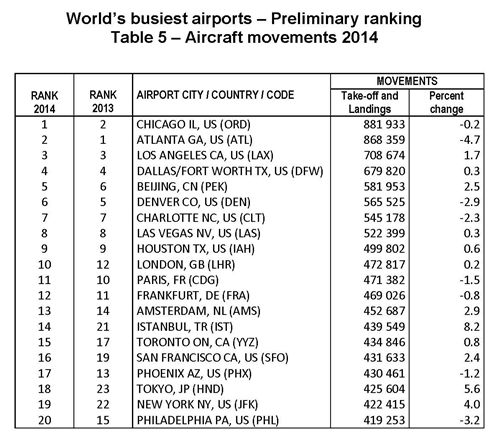 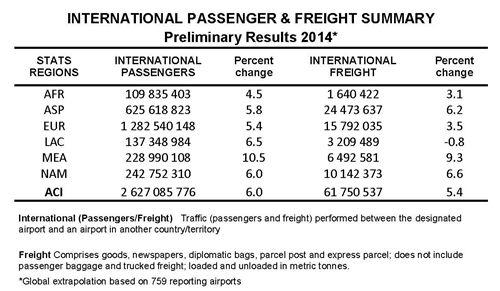 1.  Airports Council International (ACI), the only worldwide association of airports, has 590 member airport authorities, which operate 1,850 airports in 173 countries. ACI’s mission is to promote professional excellence in airport management and operations, and this mandate is carried out through the organization’s multiple training opportunities, as well as the Airport Service Quality customer service benchmarking programme, a wide range of conferences, industry statistical products and best practice publications.

2.  Please note that all figures and percentages are extrapolations based on summed monthly data submissions by the world’s major commercial airports (1095 airports). The final confirmed report will be published in summer 2015 and will include 1800+ airports; therefore figures are subject to variation.

3. For a PDF version of this media release, please click here.