Despite the continued uncertainty in the global economy and weakened business confidence that continues to jeopardize further growth in international trade, air freight volumes continue to maintain momentum after the 2014 rebound. Overall volumes increased by 3% in January. While most regions experienced gains, European air freight saw a slight decline.

ACI World Economics Director Rafael Echevarne commented, “While there is an improvement in economic conditions in the United States, weakness lingers on in Russia, the Euro area and Japan. Capital investment growth and prospects in China have also become subdued. Despite the existing perseverance in international trade volumes, particularly for a portion of 2014, weakness in these major economies may translate into bad news for the air freight market in the coming months, particularly at the major freight hubs. Thus, we should continue to monitor the on-going growth in air freight with cautious optimism.

“Although it appears to be business as usual for passenger traffic irrespective of the economic woes, there is some heterogeneity in growth across key emerging aviation markets,” Echevarne continued. “While there is slowed growth in passenger traffic in China and Russia, India is now catching up to these two countries. In 2014, Indian passenger traffic rose over 10%. In January alone, Indian traffic grew by over 18% at major commercial airports in the country. The combination of a move towards a more liberalized market for aviation coupled with stronger economic fundamentals has helped to awaken the Bengal tiger.” 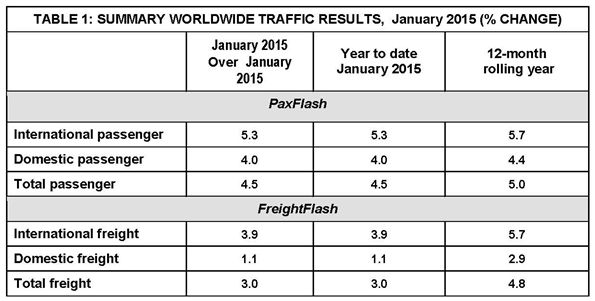