Preliminary data reveals global passenger traffic up by over 5% in 2014; air freight volumes rise in tandem after three years of stagnating growth

Montréal, 11 February 2015 – Global passenger traffic ended the year strong with year-over-year growth of 5.6% for the month of December. This is in line with the overall growth in passenger numbers over a twelve-month period. The preliminary data points to a growth rate of 5.1% year over year. Both international and domestic traffic posted strong growth rates of 5.8% and 4.5% respectively.

On the whole, passenger traffic remained resilient in the face of the global uncertainties that beleaguered many economies in 2013 and 2014. International tourism, in particular, was irrepressible in 2014 considering the geopolitical risks that have persisted in certain parts of the world such as Eastern Europe and the Middle East. The Ebola outbreak also presented significant challenges to the aviation sector. Notwithstanding, by and large, the international traveller in 2014 appears to have been immune to these potential dangers.

Despite the uneven recovery in the global economy, there is a net increase in global demand for foreign goods and commodities. This helped awaken the air freight market in the last quarter of 2013 and into 2014 after several years of flat growth. The overall flow of exports and imports by sea, land and air, measured by world trade volumes in goods, has experienced a rising growth trend.

African air transport demand is on the path to recovery with annualized growth of 3.2% in passenger traffic. Despite the adverse effects of the Ebola crisis on air transport in western parts of the African continent, Northern Africa has rebounded after a bleak period in passenger numbers for 2012 and 2013. From the eve of the Egyptian army-led overthrow of President Morsi to its aftermath, the tourist economy was crippled as passenger traffic dropped significantly in 2013. Cairo (CAI), North Africa’s busiest airport and gateway to popular tourist destinations, saw passenger traffic jump back by 6.5% in 2014 as compared to the previous year. Other Northern African airports such as Algiers (ALG) and Casablanca (CMN) experienced strong growth of 9.1% and 5.4% respectively for the year. Johannesburg (JNB), Africa’s busiest airport, ended the year with 1.3% gains in passenger numbers in 2014.

Asia-Pacific airports reported overall growth in passenger traffic of almost 6% for the year as a whole. Many of the region’s major commercial airports are experiencing slowing growth as some of them reach both capacity constraints and slowing demand. Beijing (PEK) grew by 2.9% in 2014, which is much lower than the yearly double-digit growth rates that it posted before 2011. That being said, China, as a whole is still posting growth in the realm of 7%, which is fuelled by an array of other airports serving the domestic Chinese market. The number two ranked airport in the Asia-Pacific region and Japan’s busiest airport, Haneda (HND), grew by 5.3% in 2014.

Despite the economic uncertainties that persisted in the Euro area throughout 2014, the region ended the year on a positive note with passenger traffic rising by over 5% for the year. Most of the major airports that were crippled by the Euro area crisis saw a revival in 2014. Madrid (MAD), Spain’s busiest airport, and Rome (FCO) saw traffic increase by 5.3% and 6.5% respectively in 2013. Athens (ATH), a major Greek tourist destination, saw traffic jump up by over 21%. Turkish airports continue to post robust growth figures for 2014. Istanbul (IST) continues to climb the rankings among the world’s busiest airports with growth of 10.6% on the year. On the other hand, geopolitical tensions in Eastern Europe resulted in falling passenger traffic in Ukraine by 13% and lower growth at some of the major Russian airports.

Latin American-Caribbean was one of the regions that experienced the highest growth in passenger traffic in 2014. With gains of over 6% for the region as a whole year over year, the increases in traffic are largely attributed to the burgeoning domestic markets of Brazil, Mexico and Colombia. In particular, the three major commercial airports of Sao Paulo (GRU), Mexico City (MEX) and Bogota (BOG) all experienced robust gains of 9.2%, 8.6% and 8.6% respectively in 2014. In spite of the recession in the region’s biggest economy, Brazil, passenger traffic remains unperturbed by the slowdown in economic activity.

The Middle East continues to achieve the highest growth among all regions at an estimated 9.4% for the year as a whole. Double-digit growth rates continue to persist for airports across the region. Abu Dhabi (AUH) and Doha (DOH) grew by 20.2% and 13.2% respectively. Preliminary traffic rankings for Dubai (DXB), the region’s busiest airport and one of the world’s major hubs, reveal that DXB has moved up to the sixth busiest airport in the world in 2014. It has become the world’s busiest international airport in 2014, surpassing London-Heathrow (LHR). Despite a runway closure for upgrading and refurbishment during June and July, the airport still achieved gains of 6.1% in passenger traffic over the year.

Passenger numbers have seen a resurgence in North America. Considering the maturity of the North American aviation market, growth of 3.3% is above the annualized trend of 0.5% year over year from 2000 to 2013. While domestic traffic dominates the share of passenger traffic in North America, international traffic continues to grow its piece of the market. For instance, with the expansion of its international terminal, Los Angeles (LAX) has grown by almost 7% in international passenger traffic. This has allowed the airport to position itself among the fastest growing major commercial airports in North America on the year. Traffic as whole at the airport grew by 6%. Atlanta (ATL), the world’s busiest airport, increased by 1.8% in 2014 to over 96 million passengers per annum.

The African air freight market grew by 3.8% in 2014. While Cairo (CAI), one of the highest ranking airports in terms of air freight in Africa, grew by over 8%, JNB, another leading freight hub, had a drop of 6.4% in freight volumes in 2014. As a major air freight hub that handles a significant proportion of Africa’s global freight volume, JNB’s decline contributed to the subdued growth on the continent.

Despite the Asian slowdown, which has been led by China, growth in air freight volumes in the Asia-Pacific region remained relatively strong with growth of 5.7% at the aggregate level in 2014. This can be attributed to stronger external demand and export growth. A rise in American consumer spending fuelled China’s exports of high-tech goods such as tablets, laptops and mobile phones. The top global air freight hub, Hong Kong (HKG), had an increase of 6.1% in traffic, putting it over 4.3 million metric tonnes in freight volumes for the year. Shanghai (PVG) and Incheon (ICN), the region’s second and third ranked busiest air freight hubs, had year-over-year increases of 8.6% and 3.3% respectively. HND achieved double-digit growth of 14.7%, which put it over 1 million metric tonnes in air freight volumes in 2014.

Following a weakened Euro area 2013, most European air freight markets appear to be in recovery mode as higher growth levels were achieved in 2014. Airports in the region recorded an increase of 3.6% in air freight volumes in 2014. More obstacles may be on the horizon for the European air freight market given the ongoing geopolitical concerns in Eastern Europe and the risk of another Euro area crisis. That said, IST and Amsterdam (AMS) posted the strongest growth rates among the region’s top hubs. The airports grew by 6.7% and 11.6% in 2014 as compared to the previous year. Frankfurt (FRA) and Paris (CDG), the region’s busiest hubs, led the pack as air freight volumes grew by 1.8% and 0.8% respectively.

With weakness in the Brazilian and Argentinian economies, freight volumes in Latin-America-Caribbean were almost flat in 2014 as compared to the previous year. The figures were relatively mixed for Latin America-Caribbean for the year as a whole. While Brazilian airports, which occupy the largest share of freight traffic in Latin America-Caribbean, experienced a decline of 1.4% in air freight volumes. The country of Mexico, on the other hand, saw an overall rise of 5% in freight volumes. The busiest airports of GRU and MEX posted gains of 4.2% and 5.4% respectively. BOG, Colombia’s capital city airport and one of the region’s leading freight hubs, experienced only a slight increase of 0.8% in air freight traffic.

While DXB occupied the lion’s share of air freight traffic in the Middle East region at over 2.4 million metric tonnes, volumes actually decreased by 3.1% in 2014. With capacity for 12 million metric tonnes of air freight, Dubai World Central (DWC) is now set to be the region’s future air cargo hub. The new airport has experienced significant growth following the commencement of operations. Growing by 262.5% in freight traffic in 2014, the airport is now a major contributor to overall increases in freight volumes for the region and the world. DOH and AUH, the second and third ranked airports in terms of freight volumes, reported double-digit gains of 13.2% and 12.8% respectively in 2014. The Middle East, as a whole, experienced an increase of 11.8% in air freight traffic, which makes it the highest growth region in 2014.

The higher growth in North America coincides with an American rebound. Lower unemployment and inflation containment coupled with a stronger international trade sector has created ingredients for favourable growth. For a mature market, growth of 3.5% in air freight volumes represents a banner year. Two of North America’s leading air freight hubs posted gains in freight volumes for 2013. Memphis (MEM) and Louisville (SDF), home of FedEx and UPS respectively, increased by 2.8% and 3.5% respectively. The biggest gains were achieved by Chicago-O’Hare (ORD) with volumes moving up by 11.4%. The growth is expected to continue with the investment in the airport’s Northeast Cargo Center.

ACI World’s Economics Director Rafael Echevarne commented: “In previous years we saw a marked divergence in growth between airports located in emerging markets versus those that are located in advanced economies. That is, the mature markets of North America and Europe experienced modest growth levels whereas the major emerging economies such as BRICS (Brazil, Russia, India, China and South Africa) had posted double-digit gains year-after-year. The recent cyclical slowdown in emerging markets has translated into lower growth levels with respect to both passenger and air freight traffic. However, the advanced economies of Europe and North America have rebounded in 2014, which resulted in a form of convergence in growth rates across the regions.

“Regardless of the economic, geopolitical and health risks that lingered on the horizon in 2014, it is impressive to witness the overall resilience of the industry,” Echevarne continued. “Air freight rebounded after almost three years of growth stagnation whereas passenger traffic continues to post growth in the realm of 5% year after year following the Great Recession.” 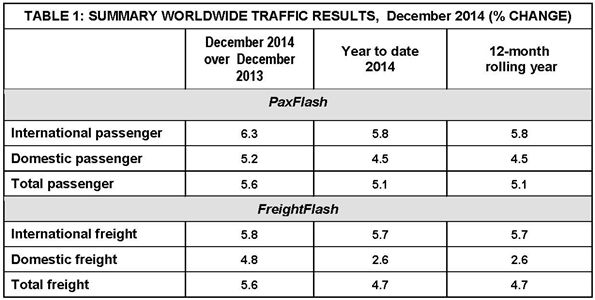