The Middle East also achieved strong growth in passenger traffic at 6.1% for the month of November. Growth primarily came from Abu Dhabi (AUH) and Doha (DOH). The airports posted gains of 15.6% and 11% respectively. Dubai (DXB), the world’s busiest airport in terms of international passenger traffic, experienced growth of 4.3% for the month.

European airports posted a strong November with growth of 5.7% in passenger traffic. 27 of the top 30 busiest European airports recorded gains in passenger traffic. This represents a recovery from a weakened Euro area that persisted throughout 2013. Istanbul (IST) continues to report impressive double digit gains at 12.8% year-over-year for the month of November. Air transport demand in Madrid (MAD) and Rome (FCO) has bounced back following the weakness in these economies during the Euro area crisis. Each airport achieved growth of 9.3% and 10.6% respectively.

Latin America-Caribbean and North American airports grew by 6% and 4.3% respectively in passenger traffic.

Global air freight traffic continued to maintain the upward trend in volumes with a year-over-year growth rate of 4% for the month of November. The overall accumulated volumes for the last twelve months rose by 4.7%. International freight volumes jumped up by 5.6% whereas domestic volumes increased by 2.6%.

The Middle East continues to achieve the highest growth in freight volumes at 12.8% year-over-year for the month of November. Since the commencement of operations at Dubai World Central (DWC), the airport has remained one of the major contributors to overall increases in freight volumes for the region. Air freight volumes at DWC have increased by over 301.9% as compared to the previous year.

Africa is experiencing some volatility in month-to-month freight volumes. While October freight volumes achieved significant gains over the previous year, November volumes were in decline by 1.7%.

Asia-Pacific posted increases in volumes of 4.7% for the month of November, which is slightly below the twelve-month growth trend of 5.6%. Nevertheless, the region’s largest freight hubs continue to report gains in volumes. Hong Kong (HKG), Shanghai (PVG) and Incheon (ICN) saw volumes increase by 5.5%, 8% and 3.6% respectively for the month.

Europe experienced more moderate growth of 3.1% year-over-year. However, results were mixed across airports in the region. Frankfurt (FRA) grew by 2.7% while Paris (CDG) had a decline of 1.8%. Istanbul (IST) achieved one of the highest gains in freight volumes for the region at 14.3% year-over-year.

With ongoing weakness in the Brazilian and Argentinian economies, freight volumes in Latin-America-Caribbean were flat for November as compared to the previous year. Nevertheless, the busiest airports of São Paulo (GRU) and Mexico City (MEX) posted gains of 4.2% and 10.7% respectively.

“Annual growth in passenger traffic in 2014 will end the year in the realm of 5%. As we look forward into 2015, we have two forces at play working in opposite directions. On the one hand, economic growth rates among certain emerging markets have diverged. Of the BRICS economies, we see India and China maintaining favourable growth while Brazil and Russia experience a slowdown. The Euro area continues to teeter towards a recession. Thus, a number of downside risks remain on the horizon in 2015.” said ACI World’s Economics Director Rafael Echevarne. “On the other hand, the recent decrease in oil prices and improvements in the American economy are likely to contribute positively to the continued increases in passenger numbers. Moreover, the boosting of world trade volumes in the latter half of 2014 has had a positive impact on the air freight market.” 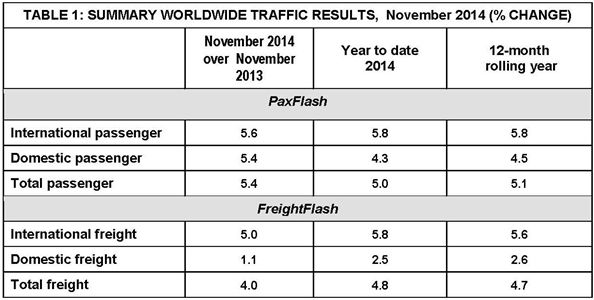