Global passenger traffic grows by 4.7% by the end of the 3rd quarter; air freight volumes post robust increases for September

African airports continue to experience a strong recovery in passenger traffic. North Africa’s passenger traffic strengthened after a dismal period in 2012 and 2013 due to the unrest brought on by the Arab Spring. From the eve of the Egyptian army-led overthrow of President Morsi to its aftermath, the tourist economies in the region were crippled as passenger traffic dropped significantly in 2013. Cairo (CAI) and Hurghada (HRG), two of Egypt’s major airports, saw passenger traffic jump back by 23.2% and 457.2% respectively for the month of September. Despite the adverse effects of the Ebola crisis on air transport in western parts of the African continent, overall African passenger traffic increased by 9.6%.

The Middle East also achieved robust growth in passenger traffic at 9.3% for the month of September. Dubai (DXB), the world’s busiest international airport, and Doha (DOH), another major international airport in the region, both achieved growth of 10%. Abu Dhabi (AUH) also achieved a significant increase of 23.9% in passenger numbers for the month of September.

The Asia-Pacific region experienced growth of 5.1% in overall passenger traffic. The domestic Chinese market was a large contributor to this growth. Many Chinese airports achieved double digit gains in passenger traffic.

Global air freight traffic continued to maintain the upward trend in volumes and year-over-year growth rates for the month of September. The overall accumulated volumes for the last twelve months rose by 4.5% while volumes jumped up by over 6% on the month. Both the domestic as well as the international freight market posted robust gains for the month of September. International freight volumes jumped up by 6.5% whereas domestic volumes increased by 5.5%.

With ongoing weakness in the Brazilian and Argentinian economies, freight volumes in Latin-America-Caribbean contracted for the month of September by 1.4%. Europe and Africa experienced more moderate growth in the realm of 3% year-over-year.

Dubai World Central (DWC), the Middle Eastern airport that has experienced exponential growth, is now a major contributor to overall increases in freight volumes for the region. Although it has only recently commenced operations, by the end of September alone, air freight volumes at DWC have surpassed the 500 thousand metric tonne threshold on a year-to-date basis, which represents an increase of over 255% as compared to the previous year.

“The global economy continues to experience a rocky recovery. Major economies such as the United States, the Euro area and Japan faced weak output growth in the first half of 2014. Emerging markets also felt the brunt of the slowdown with Brazil slipping into a recession. The geopolitical tensions in Eastern Europe and Russia continue to threaten business confidence across those regions as well. In spite of the strong positive relationship between airport traffic and the broader economy, aviation markets remain resilient and continue to grow. Passenger traffic in the Euro area and North America will likely experience higher growth levels as compared to 2013 with global growth in passenger traffic ending the year in the realm of 5% for 2014.” said ACI World’s Economics Director Rafael Echevarne. “Air freight also continues to show a glimmer of hope, irrespective of downside risks in the global economy. Volumes have remained above 2013 levels for all of 2014 up to the 4th quarter. This is cause for optimism given that the air freight markets were particularly sluggish over the last three years. Growth in global freight volumes will likely end the year in the realm of 4% for 2014 as compared to the previous year’s volumes.” 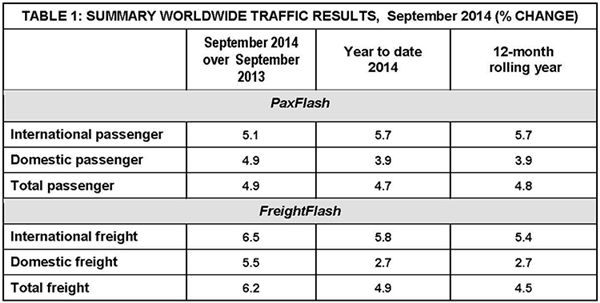