Domestic markets were more subdued as domestic passenger traffic grew by 3.5%. The world’s largest domestic market, North America, remained almost flat with respect to year-over-year growth for February (0.3%) and over a twelve-month period (0.7%). Latin America-Caribbean, on the other hand, which is also home to some of the world’s major high-growth domestic markets, saw domestic traffic rise by 12%. Brazil, which boasts a population approaching the 200 million mark, saw one of its busiest airports rise by over 16% in domestic passenger traffic in February.

Following three sluggish years in freight traffic growth, global air freight markets resurged in the last quarter of 2013 and into 2014. Growth in air freight volumes have stayed in positive territory for the fifth month in a row, posting an overall gain of 2.6% for the month of February.

The Asia-Pacific region grew only modestly with respect to international freight at 1.4% year over year. This is consistent with the overall slowdown in the Chinese economy. While Hong Kong (HKG) contracted by 1% in international freight volumes in February, the airport has seen international volumes rise by 2.2% over a twelve-month period. Shanghai (PVG) has also experienced modest growth at 1.4% over the same period.

With a more favourable outlook in economic growth and global trade, European air freight markets appear to have resurfaced once again, posting an overall gain of 3.9% in total freight traffic. Amsterdam (AMS), Paris (CDG) and Frankfurt (FRA) each posted gains of 8.7%, 4.9% and 3.4% respectively.

“From a regional perspective, there were virtually no weak spots with respect to the rise in passenger traffic during the month of February,” said ACI World’s Economics Director Rafael Echevarne. “Whilst certain regions posted higher growth than others, each region experienced positive year-over-year growth for the month of February. DXB, Istanbul (IST) and Kuala Lumpur (KUL) are among the fastest-growing airports in the world with a significant critical mass of traffic as they continue to post double-digit growth rates month after month and year after year.”

While there is some optimism in the air regarding the positive growth in the air freight market, there are two forces at play which are pushing the pendulum in opposite directions. As North America and Europe get back on course, a cyclical slowdown in emerging markets such as China will likely translate into subdued growth in the global freight market,” Echevarne added, 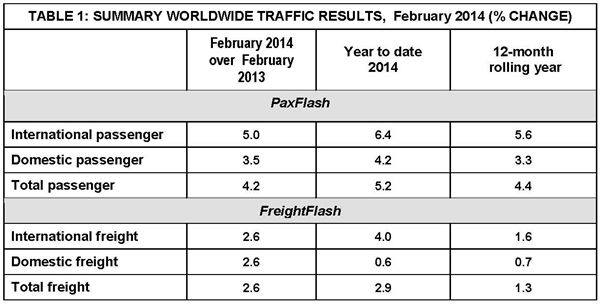