Angela Gittens was selected as the recipient of this award because of the extraordinary breadth of her contributions to the aviation industry, her ability to be a strong advocate on behalf of many aviation stakeholders and her leadership on local, federal and global levels. 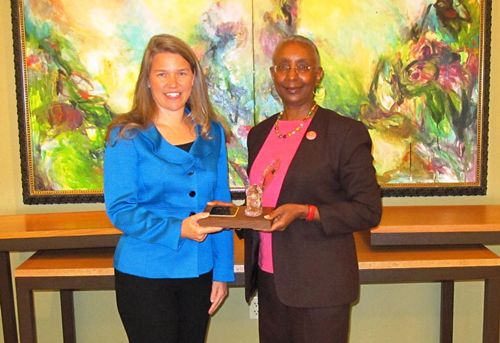 During her acceptance speech, Angela Gittens announced the launch of Airport Council International’s Passenger Advocacy Project to help safeguard the interests of the passengers at airports. This program was unanimously supported by the world’s airports at ACI’s 22nd World General Assembly in September 2012 in Calgary, Alberta, Canada and will see ACI work with airports around the globe to establish and implement recommended practices and guidance materials with the goal of providing airport passengers with the highest possible levels of customer service and assistance.

The program will seek to establish globally accepted minimum levels of customer service in order to help passengers during flight disruption or irregular operation, including in instances when passenger travel is disrupted, whether due to weather, aircraft mechanical problems or other causes, such as due to the abrupt cessations of service resulting from airline bankruptcy.

As most passengers can attest to, when there is a lack of timely and accurate information provided by airlines, the result is confusion and anxiety. The passenger is left with no one to care for their immediate needs or welfare, including assistance with the timely continuation of their journey.

ACI and its member airports have voted unanimously that passengers have an expectation to receive good levels of service when using airports and those airports also view service quality as a core value in airport management.

According to Angela Gittens, “It is important to note that it is our airport members who are calling us to step into this role of passenger advocate. It is our world governing board led by our chairman Dr. Yiannis Paraschis from Athens, Greece who embraced this project at our recent conference in Calgary and it is with the leadership of Yiannis and our Vice-Chair Rick Piccolo, that we have the policy direction and commitment to improve the passenger experience worldwide. Airports have evolved into business-oriented service providers and we accept the fact that being a passenger advocate is not only the right thing to do, it is also the right business strategy to ensure the resiliency airports. The efficient facilitation of passengers through airports is essential particularly since the number of passengers travelling globally is expected to double to 10 Billion per year by 2029.”

As we approach the holiday season, Airports Council International calls upon airports worldwide to share the plans they have adopted to help facilitate passenger travel during this hectic holiday season or throughout the year. We will publish the very best of these stories an upcoming news story to be published in December 2012. Please send your stories to James Roach, Communications Manager, ACI World at jroach@aci.aero by 16 November 2012.

Click here for the PDF of this media release.

About Airports Council International
ACI is the only worldwide association of airports. It is a non-profit organization whose prime purpose is to represent the interests of airports and to promote professional excellence in airport management and operations. ACI has 573 members who operate over 1751 airports in 174 countries and territories.